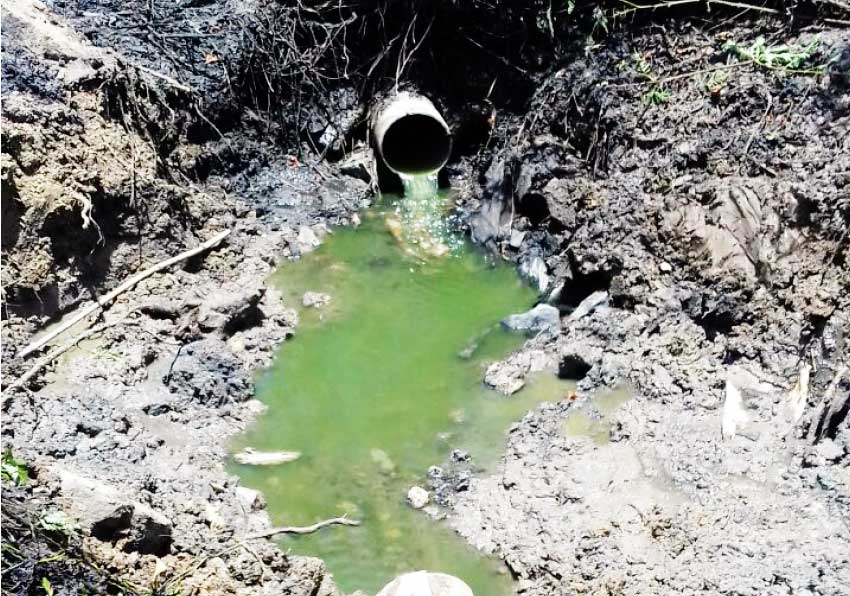 EARLIER this week, reports to and published in The Voice about something akin to an oil spill affecting the Water Treatment Plant at Beausejour were addressed by officials from WASCO, which, after investigating the ponds at the facility, assured the public that they were not at all contaminated by oil.

Upon further investigations, the WASCO officials were able to find the area in which oil had in fact been spilled, but were keen to let the public know that that spill had nothing to do with WASCO and had not in fact taken place in the Water Treatment Plant.

According to Cherry Ann Williams, the Communication and Marketing Officer at WASCO, there was a blocked drain which had built-up into a pool at the side of the road next to the Water Treatment Plant, due to an illegal connection of several lengths of pipes to WASCO pipes.

However, despite the fact that this connection has been severed, WASCO is not able to determine who made that illegal connection with their pipe.

“We have since disconnected the illegal connection and we have brought in heavy equipment to clear up the water,” Williams said.

“We cannot say who is responsible for it. People can get creative when they are up to mischief and could have gained access to that point where the connection was made…”

While acknowledging that “the situation caused a public [and] environmental health concern”, Williams stated that the clogged water next to the road wherein the oil had been dumped was cleared up over two days on Thursday and Friday earlier this week.

“There was waste oil residue in the drain next to the road by the pond,” she stated.

However, she did stress that “We have moved in to address the situation, so that there is no backup of water.”

She also stated that “with the removal of [the illegal connection of pipes], we cleaned up the area and now you have a free passage so there’s no water that will build-up.”

How the oil ended up in that clogged drain is unclear and is still a matter up for speculation. As Williams put it; “We don’t know how it got there; somebody must have dumped it in one of the drains. You never know. We can only speculate on that but…we were not connected to that. [The oil in the clogged drain]”

Asked if persons who had seen the build up of the oil and water next to the road, could have contributed to the rumours about the Water Treatment Plant; Williams responded by saying that “It could have…given the impression that it was WASCO that was responsible for it…” but reaffirmed that “None of the ponds that we have, had that leaked oil substance in them.”

WASCO has also made a public appeal to persons to refrain from making illegal connections “Whether it is for sewer or for potable water.”

Williams stated that WASCO has “a process in place where people can apply, make applications for water connection, legally and get billed and invoiced for the water that is used.” All the while advising “against illegal connections.”

She mentioned a campaign “that is set to start very soon to advise people about illegal connection” while warning that “there actually is a charge connected to that, so you can be charged for the illegal connection up to $500.”

Asked whether WASCO plans to pursue legal action against those who made the illegal connection near the Water Treatment Plant, Williams responded by saying that it would be “a bit difficult to do so”, given the fact that “there’s no way to tell or to prove how the connection was made, or who made the connection or when it was made, [or] how long it has been there.”