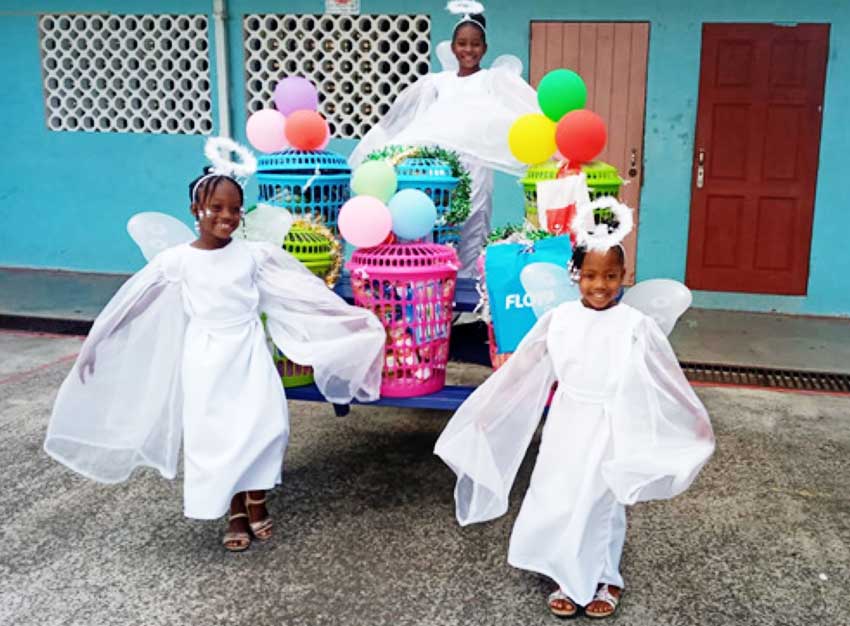 Zenith Duncan, Special Education Teacher and Homeroom Teacher at the Bocage Secondary School wishes to express her gratitude to the companies and individuals who were instrumental in bringing joy and comfort to struggling families on Christmas Day.

“An Angel’s Touch” was Miss Duncan’s idea of bringing relief to the families of students who were suffering from financial difficulty. Miss Duncan decided that she would do whatever she could to prevent those difficulties from depriving her students of their education.

According to Miss Duncan, “In the advent of teaching online, a number of teachers often reported to me that my students were not logging onto Google classroom and that there were sometimes zero to four participants.”

Miss Duncan said that she was initially enraged when she received the reports, knowing that teachers were doing their best to work with students therefore she decided to contact the parents of every student with the sole objective of reprimanding them for their children’s lack of participation in online classes.

But before doing that Duncan decided to investigate whether there were issues hindering the children from participating in online classes. She discovered that their absence was due to the presence of grim financial and economic hardships at home.

Some parents reported that their children had little to no access to devices to participate in online classes. Some households, which were run by single parents, had one or two smartphones available which were inadequate to cater to the needs of multiple children at once. Parents said they would give priority to the younger siblings to utilize devices, while the older siblings waited. Most of the households have been heavily affected by the economic impact of COVID-19. Many parents were out of work, while some were only partially employed. The situation was enormously frustrating for parents and students.

Miss Duncan understood that children were in fact interested in attending their virtual classes but were unable to demonstrate that interest due to circumstances beyond their control.

“I like to be part of the solution,” Miss Duncan remarked. “If I see there is a problem, the first thing I ask is, what can be done to fix it?’”

Miss Duncan decided to write to various companies, seeking their assistance in providing educational devices, food and even clothing for the despairing families. She wrote to Flow, Caribbean Grains, The Cell, Massy Stores, Tropics, Hobbie, and Hang Ten. Miss Duncan said the feedback from the companies were overwhelming. She expressed a great deal of gratitude to the companies for their generosity.

“These companies really supported me. They gave me an abundance. I was asking but I wasn’t expecting so much,” she said. Miss Duncan also expressed her gratitude to the many private individuals who sponsored this endeavour. Such persons include Adelaide Madeleine from Bocage, District Representative, Philip J. Pierre and a young lady who wishes to be referred to as Angel A.

“I didn’t limit the donations only to students from my school. There were persons in my community who are struggling, who literally do not know where their next meal is coming from. I decided to help these persons as well.”

Miss Duncan said she consulted the guidance of a social worker who helped her in distributing supplies to families most in need. Supplies were distributed to families in surrounding areas as well. According to Miss Duncan, parents and children were extremely elated to receive the supplies. The little angels who delivered the supplies were also very happy to bring cheer to families on Christmas Day.