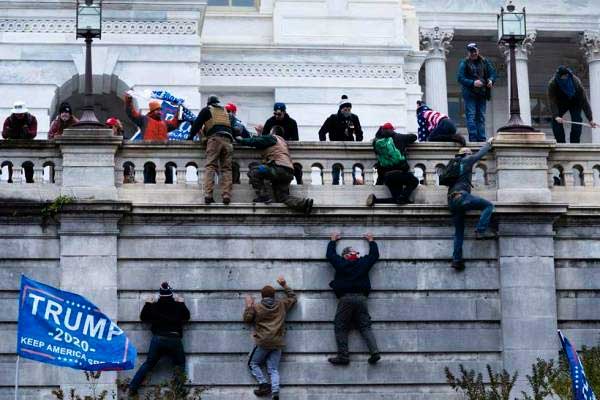 I watched the New Year spectacle unfold at the Capitol Building in Washington Wednesday night with a mixture of expectation and surprise – always expecting the unexpected from President Donald Trump, only surprised he took so long to do what I predicted four years ago.

In a commentary before the 2016 Presidential Elections, I’d offered that given how Bernie Sanders had been openly sabotaged for Hillary Clinton over the Democratic Party’s nomination, I wouldn’t be surprised – and wouldn’t cry either — if Trump won.

I did not feel Mrs Clinton had earned any ‘right’ to be President just because she’d been a two-term White House fixture as her husband’s First Lady and Barack Obama’s Secretary of State.

The Clintons already had eyes on building a presidential dynasty, with talk about Chelsea Clinton being groomed for a political career for after her mom became the first woman President.

Hillary had also insultingly described Republican opponents as a ‘Basket of Deplorables’; and in celebration of her role in the destruction of Libya and the death of Muammar Gaddafi, she laughed-out-loud and boasted: ‘We came, We saw, He died!’

I also felt a Trump victory was fraught with dangers for America and the world, as he’d shown, on and off the campaign trail, clear signs of what he was capable of.

If elected, I saw Trump heightening the political tensions, deepening and widening the social and economic contradictions, even bringing America to its next Civil War.

It was a hard view — but not a wish – as he’d convinced me during the campaign, he could even turn America on itself, or take it into deep and uncharted political waters difficult for even Uncle Sam to swim out of.

Trump won and on the night of his first 2016 dinner celebration he launched his ‘2020 Campaign’; and as President, he gave every indication he had no intention departing the White House — voluntarily or easily.

On the night after he was impeached in 2020, he defied the Democrats with an advertised calendar meme featuring him winning every US presidential poll for the next century.

And as the November 3 election approached, he also refused to give any undertaking he would concede if he lost, claiming the only way he could lose would be ‘through fraud’.

Trump also fanned the flames of racial war at the height of the Black Lives Matter protests, refusing to withdraw support for the armed and racist Proud Boys, instead advising them to ‘Stand-down, but standby…’

And after losing as expected, Trump’s Republicans filed hundreds of legal challenges, hoping to clog the system and hopefully impress the Supreme Court to stall, annul or reverse the counting process while assigning fixers to fix the results his way.

The Capitol Building assault was no sneaky surprise, as the President had given enough notice.

This had only happened before in 1802 — and since then no US president who lost an election had so refused to accept as to do what Trump did in 2021.

But ugly as it was, the Caribbean is not entirely out of the picture when it comes to losers refusing to accept loss — only that our politicians have shown they are better at it – and more successful.

Yes, we do these things in our Caribbean:  Remember how Jamaica crashed the West Indies Federation in 1962 by withdrawing, Trinidad & Tobago’s Dr Eric Williams memorably summing-it-up as ‘One from ten leaves nothing!’

We’ve shown, over and again, across the region, how and why we’re actually better at this type of irregular (but not illegal) changing of elections results than even the British who taught us, some Brits even openly commenting on the apparent limitless elasticity of our legal and judicial flexibility in constitutional matters with bearings on political power.

So, having been there and done all that, I couldn’t have fully understood why so many of us were so surprised that Trump invented and implemented his own advanced plans to subvert the results of a vote that would end his living dream of permanent residence at 1600 Pennsylvania Avenue, Washington DC.

But then, I sometimes forget my age…

Many everywhere mistakenly believe this is the end of the road for The Donald, but let’s not forget the Old Trump started his new race for 2024 long before that for 2020 even began – or ended.

Far from this being his end, he’s already shown that even with a new successor about to takeover in Washington, his old war for total control of America isn’t over.

It’s only just started – and early in the New Year, he already has a new trump card!