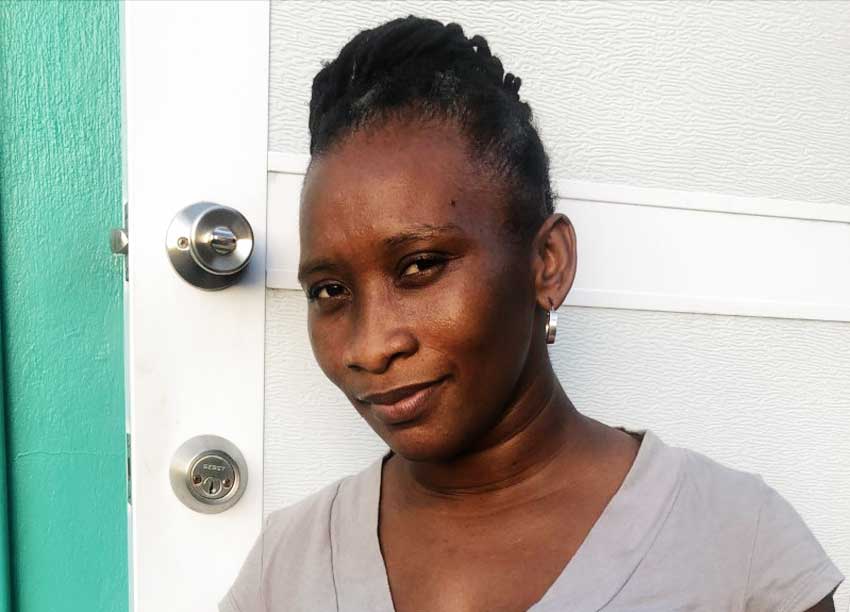 SHERMINA St Croix’s story broke my heart in a thousand pieces. I met Shermina on Monday and it was hard to keep a straight face after meeting her. She seemed to be one of the happiest persons on earth but oh how a smile could hide a world of hurt.

After speaking to her, I realized that my “problems” weren’t “problems” after all—unless I wanted them to be. This woman had experienced real pain and was facing real struggles.

“I worked in the hotel sector for a long time. I attended the Girls Vocational School and after I left I went to the Centre for Rehabilitation and Education also known as C.A.R.E. I wanted to get something better for myself so when the National Skills Development Centre (NSDC) announced that they were giving free courses I signed up. I was training to be a housekeeper,” she told The VOICE.

“They placed us in different resorts and guest houses and I went to Sandals La Toc. Sandals kept me because I performed well. I stayed there for a year and then I was transferred to Sandals Grande and I stayed there from 2007 to 2010. I moved to Sandals Halycon afterwards so I’ve been a member of all three Sandals Resorts,” she said.

Her radiant personality lit up the atmosphere and soon, she was offered a promotion.

Later she would move to Calabash Cove and after four years she said farewell and started a new chapter at Marigot Bay Beach Resort.

“I was a housekeeper but I applied to be a personal assistant. I started doing the training and then COVID came and we lost our jobs in March. That’s when it became stressful for me because I was in a position where I could take care of my family and then in the blink of an eye everything changed. It was hard to save and the little that I had I had to use throughout COVID,” the mother of five said.

“My mom’s house was destroyed by a fire that same month. It was devastating because we lost everything. It’s like everything just hit us at once; I lost my daughter in 2018 and then I lost my job and my home. It was a lot of stress,” she added.

Shermina is still reeling from the death of her daughter whom she loved dearly. It’s still a sore subject for her.

“According to doctors, she was perfectly healthy, they couldn’t find anything wrong with her. Before that I didn’t know anything about Sudden Infant Death Syndrome (SIDS). I still have her pampers; I have everything. We go to the cemetery all the time. Every time I see a child around her age it reminds me of her,” she said with a wave of sadness.

She could not understand her fate. The pain was unbearable but still she believed God would see her through.

“Everything was going through my mind. Like why me? I just couldn’t understand it. I did not think of committing suicide because I always think of my children first in everything I do. They’re blessings from God and I cannot let them suffer. I have to do whatever is in my power to take care of them,” Shermina said.

“I still had hope, I said you know what? At the end of the day my children are alive, my mom is alive and I could still make something out of myself, that’s not the end of it. I always believe when you think you’re in a bad position there are people who are in a worse situation than you,” she added.

She now works as a security guard and she’s simply grateful to have a job in the midst of a pandemic.

“It’s a hand to mouth job but I still appreciate it. At least I could put food on my table for my children; there are a lot of people who cannot do that. A lot of people would tell me ‘young woman like you, you’re a security?’ That is what’s giving me a bread. I will not (sell) my body; my body is my temple. I’d rather be a security guard,” the young mother said.

She’s a kindhearted woman and she truly is one of a kind. If you ever meet this woman, consider yourself lucky.

“My heart just melts when I see someone in need of help. Once I can help someone, I will, that’s just the kind of person I am. I love people. When I left school I decided to volunteer at the children’s home in Ciceron and I stayed there for a while. It made me happy,” she said sincerely.

Shermina understands pain all too well. She grew up with little and has struggled throughout her entire life. Because of this, compassion oozes out of her.

“My mom was a single mom and she struggled to send my six siblings and I to school. There were days when my mom had nothing to eat—whatever little that she had she would give to us. Now that I have my children I realize that she did not want to leave us without,” she said.

According to her, “taking care of my children means everything to me. It’s one of the reasons why I became an Ardyss Life ambassador, I wanted to bring in more money. Their products help people with all kinds of sicknesses and I really love helping people so of course that makes me happy. Persons can message me on Facebook if they would like to become an ambassador. I know things are hard so by selling these products they can help themselves.”

Motherhood has truly changed her. It definitely made her wiser and happier.

“It has opened my eyes a lot. When I was younger I loved partying; I didn’t want to save, I just wanted to have fun. As a mother you have responsibilities and you don’t want your children to go through what you went through,” she stated.

Being a mother of five, is a full-time job. It’s not easy but Shermina makes it work.

“To anyone out there that thinks there is no hope, there is always hope. Once you wake up in the morning there is always hope. At one point I was asking God what I would do but (he made a way). We must always encourage each other and motivate each other because you never know what people are going through. People see me smiling every day and they don’t know what’s going on in the back of my mind so it’s always wise to motivate people, not break them down,” she advised.

“I have big goals and I don’t think I will ever reach my stop,” Shermina said brightly.