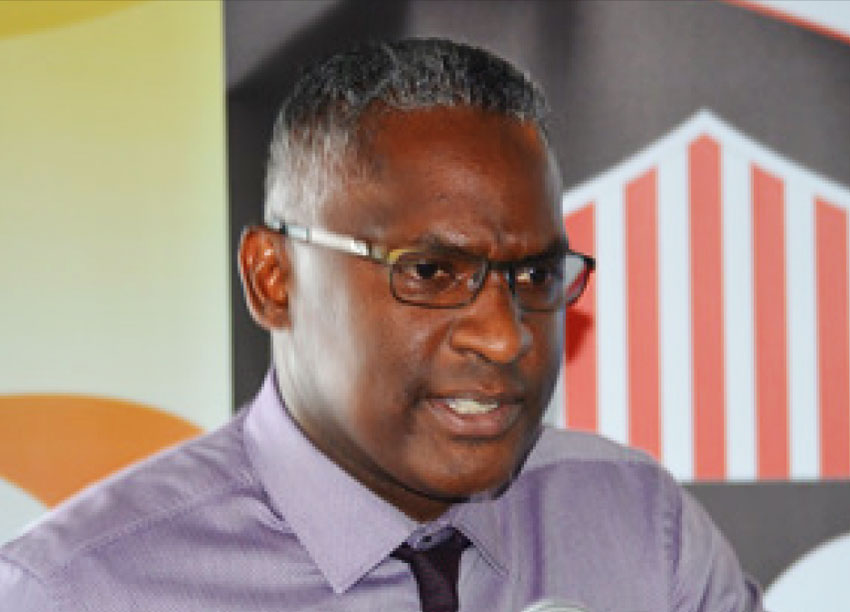 THERE is an old adage that says, “ The vast majority of successful people who ever lived are people you’ve never heard of” and if by chance one decides to take a closer look or a walk down in history and consider happy successful people, it’s almost certain that we haven’t heard of them.

Today (Saturday 14th) this reporter takes a different twist in his Sports Profile when he looks at a very unique individual who has contributed immensely, not only to sports but who has given humanitarian service to nation building.

He is quiet by nature, mild-mannered and unassuming; Fred Alvin Norbert Malaykhan has racked up an impressive track record for himself.

Many persons know him for his role as the Financial Controller and Director of Saint Lucia Insurances Limited, the local agents for Caribbean Alliance Insurance Company Limited, a regional insurance company. What many persons may not know is that for over six years, he worked in New York in several capacities including Remedial Instructor, Shipping Coordinator, Volunteer Tax Assistant and Financial Controller.

His extensive educational background, along with his experience, has equipped him with the necessary tools to be at the helm of one of Saint Lucia’s leading general insurers now serving as the Company’s Managing Director and Chief Financial Officer.

Alvin served as a member of the Investment Committee of the National Insurance Corporation of Saint Lucia and a Commissioner / Acting Chairman on National Regulatory Commission (NTRC). He is also an active member of the Insurance Council of Saint Lucia where he has served for the past 20 years and according to Alvin, “I started in the dual role of Secretary/Treasurer and for the past 10 years, currently serves in the capacity of Vice President”.

When he is not working, he likes to unwind by watching and playing basketball, football and, being the true West Indian that he is, cricket. He is also the Chief Executive Officer and founder of the most prestigious football event in Saint Lucia, the Veterans Football Tournament, held annually during the months of October to February.

Alvin is a known philanthropist having created several events and raising funds for the most vulnerable and needy. Through the Veterans In Sports Inc. he supports several ventures such as a ‘Kick for a Cure’ which has been running for the last two years and has raised over $10,000. Those funds are then donated in support of persons and organizations who require medical assistance. Though Alvin is heavily involved in the development and promotion of veteran’s football, he is also quite passionate about the development of youth.

Over the years he has continued to use Veterans football as an avenue for the development of youth football by exposing young, aspiring male and female footballers to former national and international players in clinics and short training programmes. He has also through his international network been able to source sporting equipment which has been passed on to needed youth in the community. His simple motto has always been, “Our youth, Our future!” This has driven him to continue to, work hard and creating that platform for opportunities that many of our youth would not normally be exposed to such as academic and professional advancement. Pre COVID-19, Alvin had connected with a football team out of Canada who had planned a three-day training and development session for youth around the island. The individuals who would have provided the sessions were certified coaches and scouts.

A resident of Rock Hall, Castries, Alvin grew up with his parents Norbert and Emilia Malaykhan and his three other siblings. As a young boy he first attended the Methodist school on Chisel Street, then moved to the Sans Souci Government School, (now Carmen Renee Memorial). From there he attended the St. Mary’s College where he excelled both academically and in Sports. He then moved to the then ‘A’ Level College, and after, migrated to the United States to further his studies and professional career. As a true patriot he returned to Saint Lucia, knowing that he had something, not sure what it was, but something to contribute to the development and improvement of his people.

Alvin was well balanced, as from a tender age his dad, who was a great lover of sports, had planted in him a dream of watching him suit up and playing cricket for the beloved West Indies Cricket Team. This did not turn out as planned but he believes that the path that he took got him to push his dad’s agenda, which was ‘giving back, promoting, and developing sports’ for the next generation.

Before moving into Veterans Football, which he is known for, Alvin was considered by many to be a good cricketer. It was under the coaching and guidance of former Windward Islands Cricketer, Julian Charles and the outstanding St. Mary’s College (SMC) sportsman, Brian Calixte, who saw the gift in him that at the age of 12 started playing cricket for Central Castries youth team and within a year had moved into the senior squad, playing with the likes of Gregg Wilson, Sheldon Thorpe, and Keith Charlery.

As he began to excel in the sport, and on his path to being an outstanding cricketer, Teddy Francis, a then teacher at SMC noted his talent and athletic ability that he was soon to become a star of his school house “Tapon”.

Teddy Francis also discovered that while Alvin was an excellent 400-metre runner, there was still some untapped potential hidden deep within this ‘always cheerful’ young man. Alvin became a premier long jumper with natural ability to become whatever he wanted. At the age of 13 (Form 2), Alvin started his long jumping career when he won his first medal ever, silver, jumping without any shoes. He developed a special love for the sport and was taken under the wings of David “Bone” Francis, who had defeated him and won the event in Alvin’s first year of competing. David and his best friend Duane “DP” Philip, (his nemesis throughout his jumping career) worked him out and taught him the finesse associated with the event, he soon became an outstanding athlete.

Alvin went on to set many SMC, inter school, national and Windward Islands records through his competing years. He still holds the National Junior record which was set at the M & C Games in 1988. However, it was not all great in the events as his greatest disappointed was not representing Saint Lucia at the CARIFTA Games in Trinidad and Tobago in 1987. At that time, he was ranked the best 17-year-old Triple Jumper in the region. However, it was sweet revenge that a few months later, after the CARIFTA Games, that the then second place winner from Saint Vincent and the Grenadines would experience the agony of defeat at the Windward Island Games and Alvin would have received some consolation for not being selected to take part in the CARIFTA Games. Alvin was able to win the Gold medal in the event, setting a Windward Islands Schools record.

Alvin having many talents also represented Saint Lucia at the Windward Islands Schools level in Basketball, where he played the position of Forward.

On the personal side of things, Alvin fell in love with his now wife while attending the A Level College in 1987; following A Level College the two individuals went overseas to pursue their education and got married in 1995 on return to Saint Lucia giving birth to one son during these 25 years.

All this said, we now need to ask the question, where did his football career start?

In 1994 on his return home from the USA, there was a burning need within to do some sort of exercise and to remain fit, noting his past sporting history. His brothers in law, Steve Charles and Lin Ernest introduced him to the Saturday morning, what was considered a sweat, on the Castries Comprehensive Secondary School grounds. At the time, the sweat was a mix of past “Compre Boys” Andre “Mano” Emmanuel and crew and “Scotiabank Boys,” Fabian “Bunny” Louis and the gang. It was quite interesting as the younger boys were taught the lesson of football by playing against the older men such as Jabbah, Kennedy “Boots’ Samuel, Mike Olivere, Gobwill, Mr.Meddard, Richard Sayers, Hayden “Rubber” Murrell, Trini, Rawle T, just to name a few.

It was there Alvin was introduced to Caricom Masters. At the time, the club was simply a bunch of “veterans” taking a sweat and playing in tournaments around the island. The team included guys throughout the Caribbean, hence the name Caricom Masters. His good friend Fabian “Bunny” Louis soon became the manager of Caricom Masters and the club was officially launched. They both pooled their resources and planned the revival of an official veteran’s tournament.

In 2011, the revival Veterans tournament was launched. It was a serious movement transforming the idea of football by the retired and older players. With assistance from David “Shakes” Christopher, CEO Blackheart Production and the great Brian “Ras Ipic” Mc Donald Radio Saint Lucia’s Sportscaster, that Veterans Football was truly revived.

This tournament stimulated the football community with retired footballers finding new belongings. Now, youth are so eager to turn of veteran’s age to be a part of this premiere tournament in Saint Lucia. High profile sponsors continue to provide support noting the quality of the tournament. Teams from around the globe keep looking where our little Saint Lucia is placed on the map.

In 2018, our tournament got the eyes of teams in North America and we saw the Island Masters Touring Team visiting our shores and competing with our top local teams for the “Goodwill Trophy!”

All in all, “Mals” as he is affectionately known has a very colourful career, having won the Veterans Tournament with his club “Caricom Masters” in 2013. His club has given him several accolades such as “best attacker, leading goal scorer, most inspirational and the highest award from the club the “espirit de corps”. As a veteran player he won the most goals Plate Championship, Fastest goal award to name a few. He has been instrumental in helping local communities by hosting the veterans’ tournaments through many communities, contributing in his little way to help vendors support their families.

Alvin continue to live with the passion and love that he has experienced in his upbringing as he makes his mark in the development of sports; our youth are equally excited about extending the playing careers of our veteran footballers.

Alvin has stressed that he would not be able to be where he is today without working crew who work tirelessly to ensure success, such as Garvin Niles, Amantha James, Rosemarie Lovence, Lopez Barthelmy, Tennyson Glasgow, trusted sponsors from the inception, and most importantly his family, who continue to provide support regardless of the situation.

According to Alvin, “They are totally responsible for the great success of what is there today”.

Final words: “I would like to re-emphasize that ‘my work here remains incomplete’. I believe there is a lot more to be done and I won’t stop until my entire vision is rolled out and Saint Lucia becomes the envy of the Caribbean” He noted.

Asked to be specific about his vision, he said, “To make Saint Lucia the Mecca of veteran’s football in the Caribbean, targeting all veterans and retired football players worldwide’.