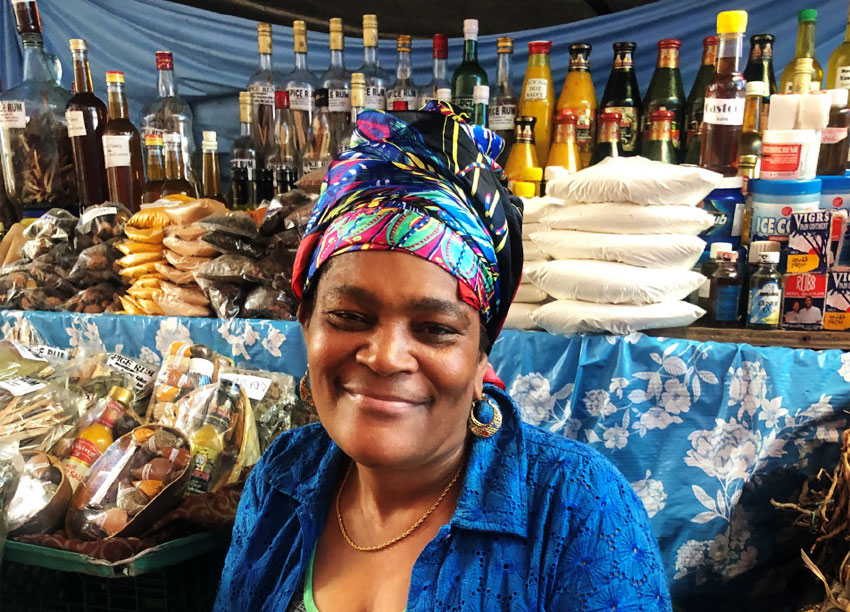 I met Verlin Isidore at the Castries Market on Wednesday. She greeted me enthusiastically and seemed absolutely carefree. The 50-year-old was anything but ordinary and stood out in a colourful crowd.

Her tray was filled with local gems, some of which she handcrafted. As she prepared to leave the busy market, Verlin told me all about her way of life and what she loves most about it, as well as its downsides. She is a hard working woman who is determined to see her children succeed.

“I’ve been selling by the market for around eight years. When I was younger, life wasn’t easy and that’s why I want better for my children, I don’t want them to have it hard the way I did. I come here at 5:00 a.m. or 6:00 a.m. every day,” she said.

“When I was going to school I used to wash clothes for people for $7.00. After I was done I would bring the money for my mother and she would buy things like sugar for us to use. I also had to weed people’s gardens so we could buy meat and other things so it wasn’t easy. We had to struggle a lot to make a way for ourselves but even then, I liked my childhood. For me, it was really good. Back then I attended the Les Etangs Combined School,” the vendor explained.

Although her mother was a poor woman, she was rich in talent and because of this, she passed on her gifts to her children.

“Before my mother died she showed her children how to make different things. There were 12 children in the family; eight girls and four boys so it was a lot. Now I make things like jam, tamarind ball, fudge, guava cheese, tablet, castor oil, coconut oil, cocoa stick and a lot more. I love to make the jams especially. You can get the best jam here,” Verlin said.

She is a bold faced, “no nonsense” woman but underneath it all, she is sweet. She embraced me almost instantly and treated me like a family member. Verlin introduced me to her peers and it’s clear that she has a good relationship with some of them.

Her sense of humour is unlike any other and on that day she was the center of attention. Her impish grin made her even more endearing and it’s easy to see why she is so popular.

“I like selling by the market because I get to meet a lot of people. I love meeting people and talking to them; I’m a very friendly person,” she said.

Nevertheless, life by the market has changed tremendously according to her.

“Before COVID, life was better of course. Now, there’s no money and that’s the biggest problem. Sometimes the customers pass and you don’t get a sale, sometimes you only make about ten to fifteen dollars a day and I have two children who are still going to school; one is going to Sir Arthur Lewis Community College, the other is going to Leon Hess Comprehensive Secondary School so I have to make money for me to feed them,” she stated.

“The thing is even when I don’t make much money I still have to pay a porter $5.00 to help me every day. That can be really tough because sometimes you just don’t have much money but you have to pay them because they help you. Thankfully, I’m still able to go on,” she added.

According to her, giving up just isn’t an option.

“Although it is very hard, I still continue to do it because I have children and it’s my way of life. You can’t just sit at home doing nothing, you have to come and make a dollar. Sometimes it’s nice and other times it’s not,” she said.

Her relationship with God means everything to her and without Him, she “wouldn’t make it” she revealed.

“People need to have a relationship with God because He’s the only one who can help us. My advice to those who are feeling hopeless because of the way things are right now is to hold on to God, go to church, pray every day and He will help you. Put Him first in all situations,” Verlin stressed.

One way to ease the pain, she said, is to simply dance the pain away.

“Sometimes I dance to gospel music when it’s playing on the radio; I also listen to inspirational programmes. Sometimes you cannot tell people your situation, you have to pray to God and give Him all your problems and He will make a way for you. I also read my bible all the time and I write my prayers in a book as well,” Verlin added.

The vendor hopes to expand her business in the future but for now, she’s just taking it one day at a time. She turns 51 next week and she’s looking forward to making the best of it.