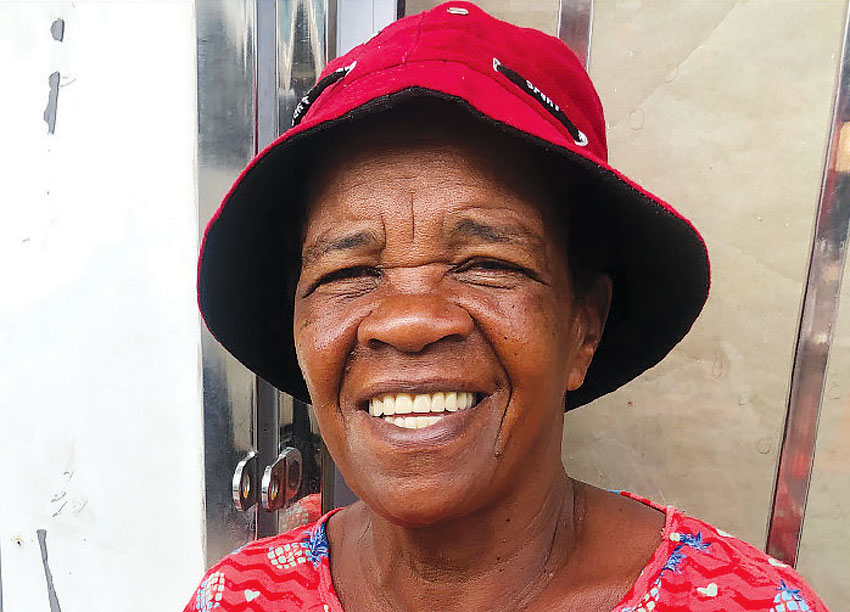 PRISCILLIA James is a true survivor. This vendor has been through a world of pain, still, she manages to smile even though memories of her past haunts her years later.

I met Priscillia yesterday in a sea of strangers. I couldn’t possibly imagine what this woman had been through and after I heard her story I was simply dumbfounded. Her wide grin, gentle eyes and inviting personality concealed her pain—Pricillia was a battered woman who lived in a hellish nightmare for a long time.

“My first husband abused me badly; it’s as if he was possessed. We got married in 1978 and by the time Hurricane Allen hit, he was already in jail,” she told The VOICE.

“We were living close to each other and he was a baker. He offered me bread and he gave my sisters bread too. One day he told me he wanted to visit the country side as he wanted to see what it was like, and he also said he wanted to visit my parents so I agreed to take him. When he got there, he told my parents he wanted to marry me but he never mentioned that to me. We were not in a relationship so I was shocked,” she added.

It was the beginning of her nightmare and she could not believe her fate.

“We went back to Castries and that’s when it all started. He got me a wedding dress and I knew nothing about it. I started agreeing with everything he was saying but to tell you the truth I think there was evil involved because I don’t understand how somebody can just capture somebody like that,” the 61-year-old said in amazement.

Her sister was furious when she heard the news and refused to attend her wedding. According to her, this man was “bad news.”

“My sister saw something bad in him. She didn’t want me to marry him and called him a wicked person. The marriage started a little well but his bad side came out fast. He accused me of all sorts of things and started abusing me,” Priscillia said.

“He would say I didn’t want to have children with him and accused me of getting rid of his children but God knows I never got pregnant. My life was miserable my dear. Once, I bought clothes for myself after my sister told me there was a sale at a store in Castries. When I told him I bought it, he got so upset. I was cooking food on a coal pot that day and he removed the pan and placed all the things in the fire,” the vendor stated.

“Did he beat you often?” I inquired.

That I discovered, was an understatement. Priscillia walked me through horror lane, showing me bruises on various parts of her body.

“Sometimes he would punch me repeatedly on my legs and arms but I fought back; I kicked him with the other leg. Once he stripped my clothes off me and placed a lamp on my belly and he told me he was going to burn me. I was completely naked. Thankfully he didn’t do it,” she stated.

“I had a miserable life with that man. I actually had to walk from Lastic Hill to Victoria Hospital once after he attacked me. My sister tried to help me but he pushed her,” Priscillia added.

Soon, she realized she had to leave before it was too late.

According to her, “when I told him I was leaving he took all my clothes and he dumped them in water just so I wouldn’t leave. I could not bear it again.”

Later things would get even worse.

“After I left him, he begged me to come back but I refused to go back. I left my home one Sunday morning because water was a little scarce. I had planned to go to the river and wash and I even bought a blue soap. I was standing by a stand pipe when I saw him coming. He had a cutlass on his shoulder but I didn’t pay attention to him because I didn’t believe he was coming to me and he walked straight up to me and said if you’re not coming back, I’m chopping you now and he just started chopping me right away,” she said.

Her husband revealed his sinister plans to her earlier but she never believed it would come to pass.

“He told me he would have done it. He came to my church and whilst I was singing he told me he would do that to me in my ear. He chopped off my ear, sliced my head and belly and my intestines came out. I fell by a little precipice and people started screaming,” she added.

The abuse came to an end after he was arrested. Later, he took his life.

“I was buying bread from a bread van and the radio was on and that’s when I heard the news. The announcer said that he killed his girlfriend and that he abused his wife before. He went to live with her after he came from jail; he hanged himself I heard,” she said.

For her the nightmare was over, but for another family, it had just begun.

“To all the women who are in abusive relationships pray to God and He will help you. As long as the relationship is not right, leave. God will deliver you; if He delivered me He can deliver anybody else. You just have to trust Him and pray in faith so He can work a miracle for you,” she advised.

“I know it’s not easy to leave and some men threaten women too, like my first husband did to me. Sometimes you won’t want to leave because of your children and also because you’re not financially stable, but you still have to get the courage to leave because that person might kill you,” the Saltibus resident added.