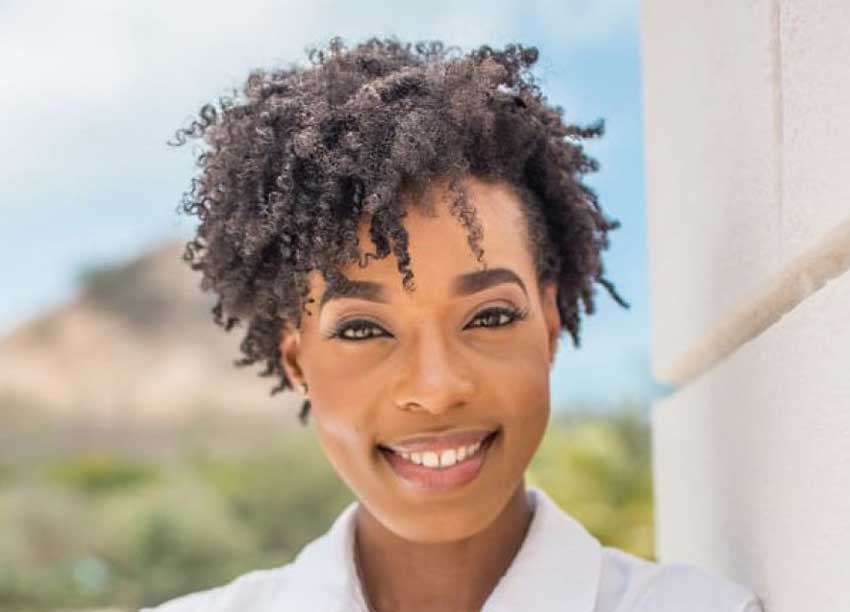 LOUISE Liza Victor is the very definition of a go-getter. At 29, she’s the Executive Director of The Msgr. Patrick Anthony Folk Research Centre (FRC), an accomplishment some can only dream of. She’s worked diligently to get to the top of the ladder and now she’s enjoying the fruits of her labour.

Louise hails from Micoud, a place which will always be home to her. For her, it is a true gem and there is simply no other place on earth like it.

“They were the best days ever. I think the community and the village really did raise me because I had such excellent families on both sides. There was always so much love; I didn’t have sisters but I felt like I had sisters in the form of my cousins,” she said in an interview with THE VOICE Wednesday.

Louise was destined to succeed and those around her knew it.

“At Micoud Infant to Micoud Primary I was a star performer and I was earmarked as the girl in the class to go to St. Joseph’s Convent,” she shared.

“My family had earmarked me as that as well and my godmother kept saying she bought white shoes already because I was between 80’s and 90’s constantly. For Common Entrance the problem solving paper just didn’t work out for me and I got 26%. I was (in the) late 80’s and early 90’s in everything else, but the problem solving affected my grades so badly that it dropped my average to about 66%,” she added.

Her loved ones were astounded.

“I attended Vieux Fort Comprehensive Secondary School (VFCSS) which was actually my fourth choice; (my choices were) Convent, Castries Comprehensive, Leon Hess, Vieux Fort and Micoud Secondary. Nobody came down on me but there was just this shock,” Louise revealed.

She entered her alma mater with an air of nonchalance and decided to start a new chapter.

“I think it kind of impacted my attitude towards academics going into secondary school. I literally went from top performer to just performing average like 60’s, 70’s, and I think by then because I was on this high as an athlete I just focused most of my energy in my athletics. I was a sprinter, 100, 200 metres; I also did long jump and high jump and I was on the school’s female volleyball team. In form three I actually had the record for division 2 girls for long jump,” she recalled.

In the end Louise left VFCSS with the award for excellence in track and field.

“That was me. I was fully immersed in my sports and I didn’t give my academics as much attention as I know I could have but I did well (nonetheless); I got eight CXC’s,” she added.

Thankfully, her outlook on life changed later and Louise started excelling in academics once again; after leaving VFCSS, she’d move on to Monroe College.

According to her, “I was back to nerd Louise. I was just really focused; Dean’s list, President’s list—I was back to my brilliance. I (earned) a Bachelor’s with honours in Business Administration with a minor in Marketing.”

Her winning streak continued at Cardiff University (where she pursed a Masters of Arts) and beyond.

Her hard work has undoubtedly paid off. Now, she’s sitting in the Executive Director’s chair at the FRC, something which came as a huge surprise to many.

She continued: “People asked whether it was just sympathy for my age or for the stuff that I’ve achieved. They (FRC) recognized the value that I would bring to the organization (and) the staff have been incredibly supportive. It’s the first time there’s been a female in a while; June Frederick was the first back in the 90’s.”

Some might say that she has big shoes to fill, but Louise is more than capable of holding her own. She’s a Chevening scholar after all.

“Somebody (I think it was one of the directors) said something very profound to me in my first week and I’ve kept it. (The individual) said as much as FRC is 40 years old, as a result of that fire we’re only four days old; so yes, the big shoes are there but the shoes that I’m putting on now will eventually grow to be the size of the big ones that are standing there. It’s almost like having that reverence and respect and looking up to those big shoes, but at the same time recognizing that I’m on my own journey,” the 29-year-old said.

The former Miss Universe contestant hopes to bring a wave of change to the FRC.

“My hope is that we could have a greater youth membership within the organization. It’s no secret that there had been that generational disconnect and it’s evident even based on the ratio of members who are over, say 50, vis-à-vis members who are below the age of 30. (Also) that the organization improves its digital footprint. (Earlier this week) our YouTube channel launched and the next big step is our website and to redo the logo,” she Louise stated.

She continued: “When I saw the opening at FRC I was like how does my Master’s come to life here? And so that was what propelled me into going into that direction. For me I’m trying to bring in my own philosophy and what branding really is in its true essence to FRC. You would see that in terms of how we have repositioned ourselves, in terms of some of the virtual events that we’re having and what we’re doing for Creole Heritage Month this year; the content is presented in a very dynamic and refreshing way so once you see stuff from FRC in that way, you know that (there is a bit of) change.”

As for what she loves most about her new job, according to the Executive Director, “I think it’s what FRC represents. For me so much of the work that FRC has done has helped me to understand who I am as a Saint Lucian and give me a greater sense of my identity. I think it still has its formidable place in reassuring Saint Lucians and reminding them of what is intrinsically them.”

A former Assistant Marketing Manager at Axcel Finance and Marketing Executive at Digicel, Louise who is the current CEO and Chief Brand Strategist of Oceans Brand Consulting, describes herself as “one who cultivates wholehearted living, who is adventurous, deeply family oriented and community spirited, and one who truly loves her country.”