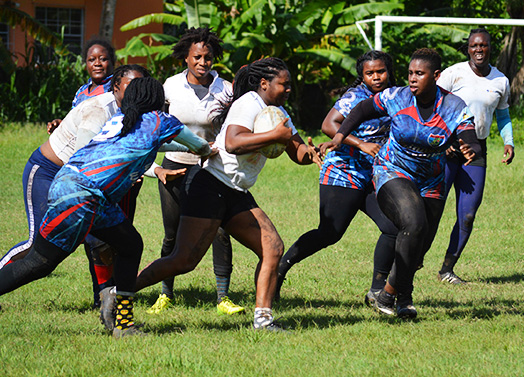 THERE was no stopping Rogues men’s rugby team at the Corinth playing field on Sunday 12th October 2020 in the final of the 7s Rugby series organized by Whiptail Warriors in collaboration with the Saint Lucia Rugby Football Union.

Rogues, led by their captain Jerry Charles breezed past Renegades 45-17 to become the first local team ever to win back to back three – peats in two consecutive rugby tournaments.

On the women side of things and despite missing out on training heading into the final 7s series for a couple of days as a team, Whiptail Warriors was still able to pull through in the best of three matches that they played against Renegades, winning 14-10, 19-15 and 17-10.

Like the previous tournament played at the Sab Sporting Facility on Sunday 27th September, a round robin format was used for the male tournament.

In game 1, Rogues defeated a combined Whiptail/Sharks team 17-26; Game 2, Renegades came out firing on all cylinders to over power Whiptail 21-7; while Rogues’ breezed past Renegades 45-17.

The VOICE spoke to Jerry Charles, Rogues head coach/ player about his team’s victory over Renegades on Sunday.

“Playing a rugby game is never a walk in the park, but it’s our own personal drive to remain vigilant to stay at the top of the winners circle, and our rivals, as usual, put up a good stance and made it competitive,” he said.

“In the first game against Whiptail Warriors/ Sharks we lost the first half they having scored three tries. In the second half they were off and running, scoring another try, from here on we had to dig deep after a few adjustments to come back to win the game 26-17.” he added..

According to Jerry, “Nobody is a push over; we work hard for every inch”.

Said Jerry, “In the final game against Renegades, we planned to score quickly, and we did by exploiting some areas and personnel that we figured was a weakness for them. In the first half we scored four tries and a further two in the second half. We also made a few changes, (fresh legs) and they went on to score another two tries, final score 45-17”.

The VOICE also spoke to Wayne Pantor, SLRFU Technical Director on the overall 7s series. This is what he said.

“This tournament was the most competitive between the three tournaments. Game experience and some key supporting at the breakdown worked to the strengths of the Rogues unit as Whiptails and Renegades showed great potential but lack the experience to test the might of the Rogues team”.

According to him the women transcended throughout the series and continued to show great improvement in defence, support and attack.

“The women would have to focus on getting their fitness up, as the next tournament format would be 10s, which has a lot more contact situations,” Wayne said.

According to him from the perspective of development, the coaches training for level 2 certification they were able to work practically with teams in a tournament setting mirroring regional tournaments.

“Being able to see the errors and make adjustment to the team’s game plan. Some were successful some were not. All part of the learning process,” he said.

“The youth players were shared between the three teams where they were given the opportunity to play along side the senior players, which showcased their athletic abilities in attack and defence. Showing that SLRFU is on the right pathway in terms of long term player development,” Wayne said.

He said, “Sometimes we may not understand the method to what’s taking place on the pitch, but you got to “trust the system” and make the adjustment through recalibration along the way”.

Podium finish: “Once we adopt this professional mindset in our routine from training to tournament on and off the field we would definitely see the rewards on the local, regional and international stages. The world is looking at you all with eagle eyes now. You are no longer a prey but a contender in this region. A positive threat to the podium”. Wayne noted.

Covid-19: The SLRFU Technical Director said, “We have weathered well considering the set backs due to the Covid -19 pandemic as other brothers and sisters were not so fortunate. We were able to hold events by creating a platform for our senior and developmental players to participate in the sport we hold so passionately to our hearts”.

Wayne took the time out to commend the support, rivalry and camaraderie between the participating teams in the SLRFU family. He also congratulated Rogues on the clean sweep of the 7”s Series; likewise the coaches and management of the SLRFU rugby development programmes.

Meanwhile, the next series would be two tournaments in the format of 10’s, Rugby. The events will take place on Sunday October 25th, hosted by Rogues and Sunday 8th November hosted by Renegades.