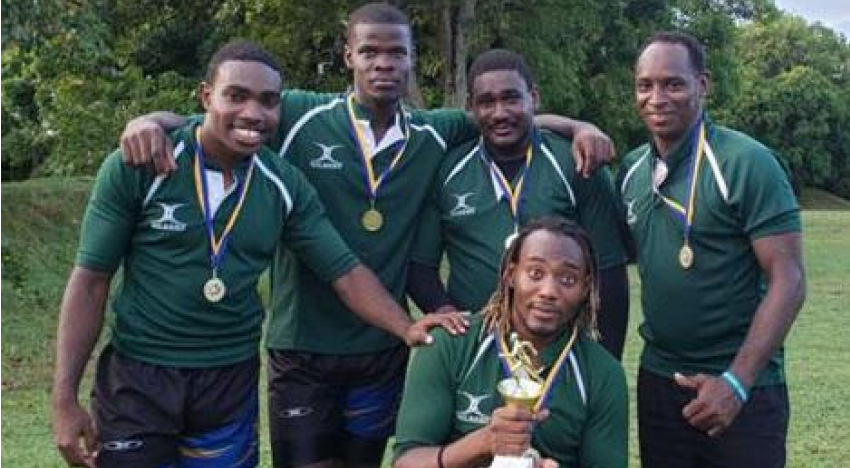 Winning back-to-back Tags 5s championships on August 2nd and 16th, 2020 established Rogues 2 as one of Rugby’s elite teams. This past weekend they captured a third straight title and went on to make history, as the only Rugby team to date to have done this feat.

Sunday saw the ﬁnal leg of the Saint Lucia Rugby Football Union (SLRFU) touch Rugby 5s organized by Whiptail Warriors in collaboration with the VBCC Stingers, a rebirth group out of Monchy, formed by one of the original players from VBCC Stingers.

After a preliminary six matches; six teams played off for a chance to be in the quarter ﬁnals.

These playoffs resulted in the quarterﬁnals: Rouges 2 had a hard-fought encounter against Whiptail Warriors winning 5 – 4, while BTC breezed past Rouges females 8 – 2.

Whiptail Warriors were unable to play for 3rd place, and so that left Stingers to step up and play against a mixture of the two females, Stingers nosed ahead 6 – 5.

In the grand finale, Rouges 2 defeated BTC 10 -7,  the two-time champions managed to keep up their pace throughout the encounter.

Top scorers of the tournament were Jeanmiel Phillip from Rouges 2, with a total of 12 tries, followed by Denzel Stanley from the Boys Training Centre with 9 tries in total.

Whiptail Warriors, Kurt Phillip commenting on the one-day event said, “This is one of the tournaments that the SLRFU asked each club to host. Starting from the backlash of COVID-19 the team has done fairly well coming out from the rust and everything else. We will now turn our attention to the 7s starting in two weeks’ time”.

Following the event, SLRFU Technical Director, Wayne Pantor spoke to the VOICE about the overall tournament.

This is what he had to say.

“As the Whiptail/ VBCC Stingers 5s wrapped up the touch series, the players have shown great development on the passing and movement into space with the ball’.

According to Wayne, “The feedback from the various teams were positive, they enjoyed the comradery and local rivalry between the teams in a competitive environment and at the same time showcasing their skills in local communities; some can’t wait to play on a larger pitch and return to the contact version of the game”.

He continued, “For me seeing the new players adapt to the faster version of the game (7s) would give me a proper evaluation of their skill sets and understanding of what was taught thus far when some of them would be selected onto the senior squads both male and female. I can state confidently, the pool of younger players from the under 19s programme has brought fresh talented athletes who would be in contention for national selection-forcing the senior players to raise their game”.

“Special mention to the Boys Training Centre (BTC) who really showed some determination, discipline and grit in the finals of 5s touch, but Rogues 2 experience got the better of them. These tournaments are designed for the younger players to get game experience”. Wayne disclosed.

Adding, “The SLRFU is on the right LTAD development pathway in providing a platform for the players to gain time on the pitch in preparation for regional and international qualifiers and tournaments in 2021 and beyond”.

Meanwhile, Rouges 2 were successful in their “Three-Peat”, the action now shifts into high gear as all eyes will be on the triple champions when the SLRFU returns to tackling with the ﬁrst leg of the 7’s series tournament. The first leg of the circuit will be hosted by the Rouges Rugby Club (RRC) on Sunday 13th September; the showpiece will kick off from 11.00 a.m. at La Clery playing field.