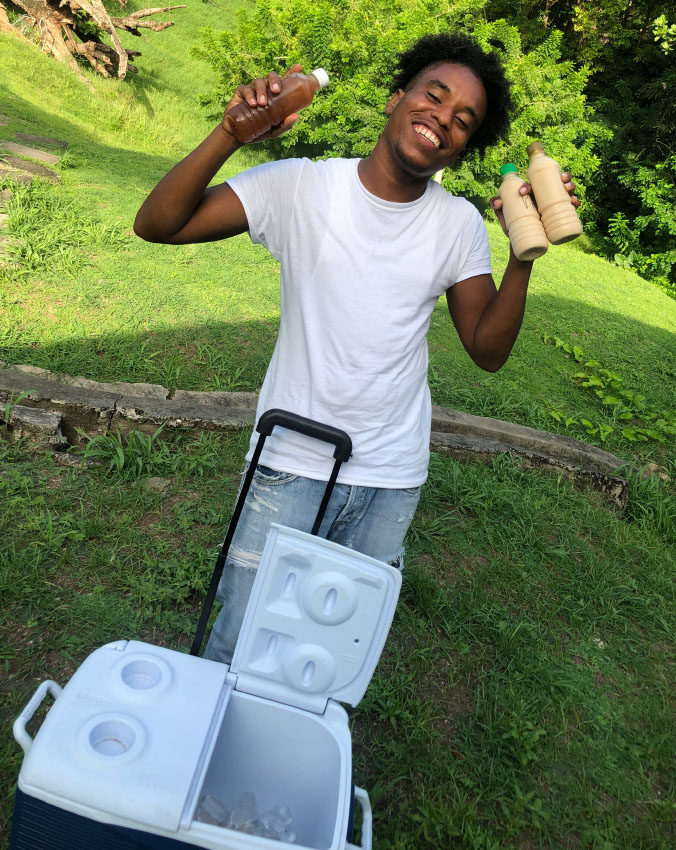 Barnes Nelson’s energy is simply contagious. A positive guy at heart, he’s always smiling and it’s hard to keep a straight face around him. Just ask his customers and they’ll tell you he’s a wonderful businessman.

Perhaps you’ve seen him in Castries, or elsewhere with his cooler ‘husslin’ his seamoss—it’s his way of life and he absolutely loves it. He takes pride in what he does and says he’s not simply selling a drink—he’s selling a lifestyle.

“It all started when I was working for family. I worked for family from 2009-2017 I think, and towards the end things were really bad and I decided that I didn’t want to put my life in anybody’s hands again. Nobody was going to tell me today I’m eating or tomorrow I’m not, so for me it was either I do my subjects all over again, because I was a real delinquent at school, or start working for myself,” he shared.

The mere thought of going back to school caused him to grimace. After all, he’d always hated it.

“In the beginning, someone made the ice lollies for me, then she taught me to make it and I ventured on to do it myself.  I started doing all flavours but I got tired of walking around for a dollar so I wanted to take things to the next level,” he revealed.

A friend approached him shortly after with a fantastic idea and Barnes welcomed it.

“He paid me to sell seamoss and I worked for him for a full year, but remember I didn’t want to put my life in anybody’s hands so I stopped. I decided I’m just going to learn to make it and do it myself,” the budding businessman shared.

Thanks to three of his friends, he was able to do just that.

“The first batch was good enough,” he said to me.

“Good enough to sell?” I inquired, not fully convinced.

“Let me tell you, whenever I make something, it’s selling. I’m not throwing anything away. It wasn’t horrible; it sold out. Even with the ice lollies too,” he recalled with an amused look on his face.

I chuckled. Barnes is undoubtedly a businessman, and today he makes the most delicious seamoss in all different flavours—peanut, ginger, coconut, Guinness…you name it!

But life wasn’t always rewarding. His childhood was no fairytale and he knew that one day, he’d have to change his story.

“I grew up (struggling). All I knew was my mother didn’t have money— that’s all I knew. Nobody never taught me how to do stuff. My father and I weren’t really close and I grew up my whole life scheming my way through things. I didn’t steal, but I’d scheme my way into getting what I needed. (Today) that’s not what I’ll tell people to do. Now, I rather tell someone if you want to become an AC (air condition) man, brother, do what you have to do,” the 32-year-old said reflectively.

And for him, giving up just isn’t an option.

“Sometimes someone will tell me something like things was slow today—that’s not me. My life is in my hands every time I come out and sell. I say to myself I’m going to do that and unless I don’t accomplish that I’m not leaving. I fight every day of my life to come out and do what I need to do in order to take care of myself,” he shared.

He’s as busy as ever, but he’ll make the sacrifice every time.

“I don’t really sleep that much. I have to make the seamoss and that takes hours and since COVID hit, sales have increased, so I basically have to lose sleep to make my seamoss. I have to get up in the morning to go out and one thing I try to do is take all my customers numbers—as many as I could get. I want to have that personal relationship with them; I don’t want you to come, give me your money and that’s it. I want us to have that relationship. My day to day entails a lot of walking around –I go to my customers every single day and I love doing that,” Barnes added.

He has no secret ingredient. According to him, “I just like nice food so I make it in a way that I would like!”

Artiste, Christian, and lover of life, Barnes wants to do it all. Barnes, who hails from Marchand, shared that his vision “is to take my business global. I want it to get as big as it could get. I want to sell more than seamoss, I want to sell ‘Action Time’! I want to sell t-shirts, music, seamoss (the raw one too) and I want to have a brand that when you see it you’ll know that’s my brand and this brand has gone and done successful stuff and beyond,” he said in closing.