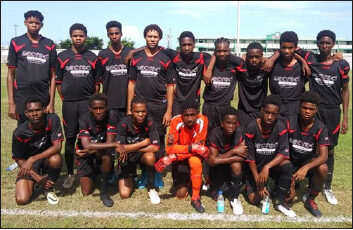 A combined 16 matches are on the cards when football action continues this weekend in the Saint Lucia Football Association (SLFA) Inc. Boys Club Western and Southern Zone football competitions at the Anse La Raye playing field (ALRPF) and the Phillip Marcellin Grounds in Vieux Fort. Also to be played is the Island Cup Premiere League at the Canaries playing field and Phillip Marcellin Grounds (PMG).

In the Western Zone Under-11 at the ALRPF from 10.00 a.m. today New Generation takes on Valley Soccer and Flow Lancers plays GMC United.

Tomorrow, in an Under-17 showdown at the ALRPF from 5.30 p.m. Valley Soccer will come up against New Generation and at 7.00 p.m. Hill Top United plays Flames FC.

In the Southern Zone at the Phillip Marcellin Grounds.

In Under-11 action, two matches will be played simultaneously, from 10.00 a.m. Black Panthers takes on DCYO and Eagles plays Knights.  Players to look out for, Silus St. Romain (Knights), Hamid Joseph (Eagles).

From 12.00 noon, in the Under 13s, Uptown Rebels will come up against Victory Eagles and Shamballa plays RYO. Players to look out for – Aunarje Theodore, Ryan Simeon and Tristan Alphonse (Uptown Rebels); Ethan Oculien (RYO).

Today, one match is on the cards in the Under-17 division; from 3.00 p.m. Black Panthers takes on OTR Striker. Players to look out for, Alpha Jn Louis (OTR Strikers); Inanco Sylvester (Black Panthers).

The double header in the Under-17 category in the Southern Zone scheduled for Sunday 20th September has been postponed.

According to the SLFA, the cancellation is inevitable and beyond their control at this time.

The matches affected – Shamballa versus Black Panthers and Eagles versus Uptown Rebels, these will be played at a date to be decided by the SLFA Technical Committee.

Points standing in matches played to date in the Northern and Western Zone: In the Under 11s – FC Pioneers – 7 points; Northern United – 4 points and T Valley – 4 points.

Meanwhile, two matches are scheduled for Sunday 20th in the SLFA Premire League tournament at the Canaries playing field: from 6.00 p.m. Roseau plays Gros Islet and at 8.00 p.m. Central Castries versus Canaries.

Also on Sunday 20th, from 6.00 p.m., the National Under-17 will fancy their chances against Vieux Fort North, while at 8.00 p.m. Vieux Fort South takes on Marchand at the Phillip Marcellin Grounds.