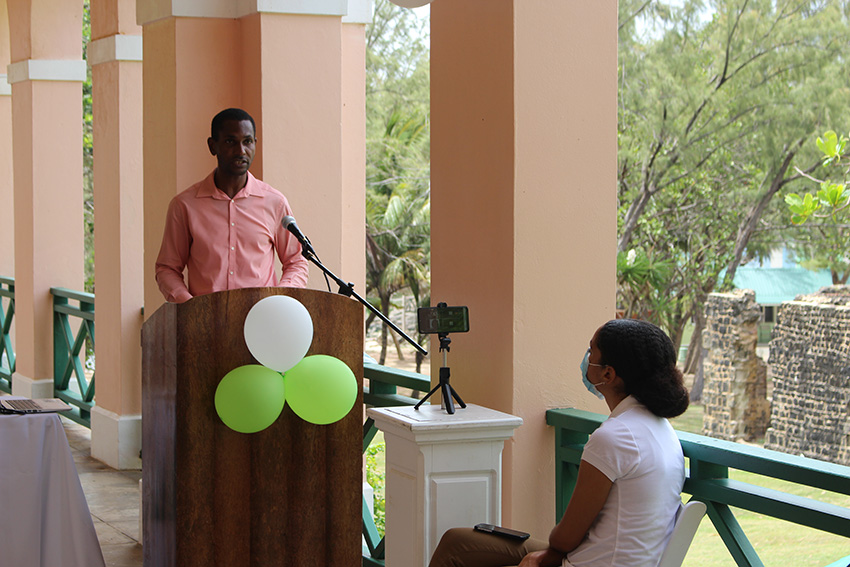 The Saint Lucia National Trust (SLNT) is embarking on a major Ecosystem-based Adaption (EbA) project which aims to increase the climate change resilience and public awareness of the Pigeon Island National Landmark (PINL) and the Pointe Sable Environmental Protection Area (PSEPA) ecosystems. This is a project of the Caribbean Biodiversity Fund (CBF), co- financed by the International Climate Initiative (IKI) of the German Federal Ministry for Environment, Nature Conservation, and Nuclear Safety through KfW.

The launch was held on 28 th July 2020, World Nature Conservation Day, at the PINL, as well as on virtual platforms: Zoom and Facebook Live. The mistress of ceremonies and SLNT’s Programme Officer for Communications and Advocacy, Karetta Crooks Charles, ably guided the diverse audience through the proceedings.

The SLNT’s Director, Bishnu Tulsie, delivered inspiring opening remarks, highlighting why this project is so important to the work of the SLNT, whose mandate is to protect Saint Lucia’s heritage. He stated “In the context of the impacts of climate change, there are issues that intersect heritage issues”. In his remarks, Mr. Tulsie also thanked those who have supported the work of the SLNT, especially the CBF for supporting this EbA project.

Subsequent to this, Dr. Ulrike Krauss, Ecosystem-based Adaptation Project Technical Officer delivered the Donor’s message. She shared that the EbA Facility is one of the instruments of the CBF, which started its work in early 2017. The project overview presentation which followed was delivered by Joanna Rosemond, the SLNT’s Programme Officer for Natural Heritage Conservation. She indicated that the project will have a lifespan of 3 years commencing January 2020, and it aims to improve aspects of PINL and PSEPA, reduce coastal degradation and increase understanding of the roles of ecosystems.

The Deputy Chief of the Fisheries Division, Thomas Nelson delivered remarks on successes and challenges experienced by resource management agencies in protecting coral reefs and mangroves. He mentioned that the EbA concept is similar to ecosystem approaches in fisheries management, which is the management of human interactions with, and impacts on the environment. For the final presentation, Joanne Norville, SLNT’s Programme Assistant for Communications and Advocacy, spoke about the Public Awareness Drive under the EbA project. She pointed out ways in which the SLNT would engage students and the general
public.

The SLNT’s Conservation Manager, Shirlene Simmons-James offered the vote of thanks and closing remarks, bringing the launch to a sound close and signalling the official start of the EbA project. Despite some technical difficulties during the event, the EbA project was launched successfully and progress of the project will be shared by the SLNT as it proceeds. This project will be of major benefit not only for the SLNT but for all of Saint Lucia, especially the coastal resource users, and as Mr. Tulsie said near the end of his inspiring address, “our heritage defines our individual and collective identity and is therefore in need of, and worthy of protection.”