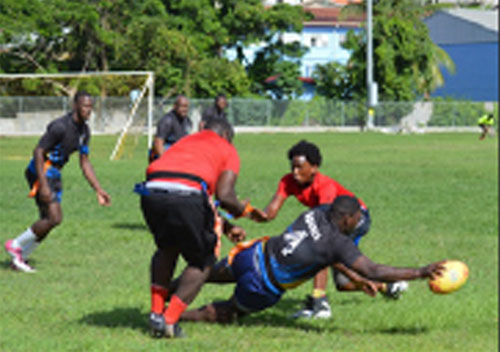 The La Clery Playing Field was a hype of rugby activity on Sunday 2nd August 2020 when the Rogues Rugby Club (RRC) in collaboration with the Saint Lucia Rugby Football Union (SLRFU) held their second Tournament of the season post the Covid-19 shutdowns. As the dust settled and the final whistle sounded, Rogues 2 emerged champions with a 10-6 score line over Rona.

With Covid-19 protocols in place to include immediate testing of players, the media and rugby enthusiasts on arrival at the venue, the proceedings got underway. The one-day tournament which comprises eight participating teams was dubbed “The King of Tags”. The host team Rogues with three teams, two male and one female along with Rona; Rollers; Reela, Boys Training Centre and Whiptail Warriors participated in the tournament.

In the preliminary round, Rogues 1 defeated Reela Rugby 4-3. Rogues 2 had a hard-fought win over Whiptail Warriors 6-4.

In an all-female encounter between Rollers and Rona, the latter won 5-4.

In their first match in the mid-morning heat, Rogues women team breezed past the Boys Training Centre- 6-0. Rogues 1 came out victorious over Rona 3-1; Rogues 2 made it two wins in as many games when they handed the Boys Training Centre their second consecutive defeat 7-2; Reela defeated Roller 6-3; and in the final game of the preliminary round, Whiptail Warriors won 7-0 over Rogues women’s team.

The showpiece shifted gears with the quarterfinal round. In Game 1, Whiptail Warriors continued where they left off in the preliminary round defeating Reela 4-3.

In another exciting matchup, a Rouges derby ensued between the Rogues’ women’s team and Rogues 1. Despite giving it their all, the Rogues women’s team went down 4-3.

In the third-place playoff, the toss of a coin was used by the two captains to settle the deal between Whiptail Warriors and Rogues 1 after the scores were locked 7-7 at the end of overtime. With the coin toss, Rogues 1 nosed ahead to capture the third spot.

With the sun still blazing, it was a high scoring encounter. In fact, it was the first time a team reached double figures. The finals were played between the heavily favoured Rogues 2 team against Rona. Rogues 2 left no room for a drawn game or coin toss as they emerged champion of the inaugural “King of Tags” 10-6 in a highly competitive matchup.

Organizer, host and coach for the Rogues team, Jerry Charles spoke to the media after the showpiece.

“We came together to play the rugby tag tournament – because of the Covid -19 situation, we are trying to have less contact. The event went well with eight participating teams and it’s good to have all these young people coming together and enjoying rugby.

In terms of the tournament being an annual event, Charles said, “It can be. We have different sponsors and we have already asked them. I must say, I have received favourable responses”.

“We had a setback for at least six months because of the coronavirus so the executive decided to do a community programme where we can showcase rugby in a softer tone, working on fitness, ball possession and playing of the games where each of the clubs will host a five a side version of the game called Tag B, which is a non-contact version where they use flags to simulate the tackle, then we move onto the 7 a side version, 10s and the last tournament will be 15 per side”.

According to Wayne, the SLRFU train will be moving around the country and some of the areas targeted are Canaries, Vieux Fort, Choiseul, and the Boys Training Centre (Gros Islet).

Wayne said, “The players were basically starved during the Corona period and to see the level of energy they came out with was amazing. Behind the scenes I sent out programmes on various platforms – Facebook, Instagram, and WhatsApp. The fitness level these players were able to sustain in these continuous games from 11.00 a.m. to 3.00 p.m. in the hot sun shows they were actually doing their homework (fitness). For me looking in and evaluating, I would say we are on par to reach top fitness level approximately by November”.

He continued, “November is our target from World Rugby and RAM Rugby in terms of regional competition. So far, they have a tentative date, November 24th for The Bahamas, but again, we saw the situation with them in terms of the Coronavirus and the closing of their borders that may actually push on to 2021. In light of 2021, we have Commonwealth and Olympic Games qualifiers, so we are on par with our micro cycle in preparation for those competitions”.

There was more to celebrate as the participants said a hearty farewell to Kameka President who received a rugby scholarship to attend Mount St Mary’s University in Maryland.

The SLRFU executive, the players and her teammates all wished Kameka the best in her future endeavours. In January, Kameka captured the MVP award following a tournament held in Martinique.

On the field of play: The SLRFU takes a week break, but the excitement will resume when Renegades will be gracious hosts of another tournament on Sunday 16th August at the Sab Sporting Facility. According to SLRFU, this local tournament is under the direction of the technical director Wayne Pantor.