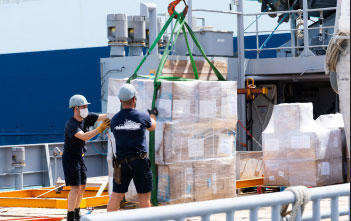 Executive Director (ag) of CDEMA Elizabeth Riley said, “CDEMA extends sincere thanks to Admiral Hausermann and the French Navy for its ready support to the Integrated Regional Logistics Hub. This assistance is demonstrative of the strong civil military partnership which exists within the Regional Response Mechanism.”

The IRLH is funded by the Government of Canada, where CAD$401,359 has been re-allocated towards its operations from the Targeted Support to CDEMA Project. Cargo arriving at the designated port of entry is managed by the CDEMA CU team and volunteers from local partners including the Barbados Defence Force and the Barbados Red Cross Society.

The multimodal transport system solidifies the effectiveness of the regional hub. The final stages of operation occur when items are received by the state and subsequently delivered within the country. The IRLH is expected to transition into a legacy arrangement, which will provide response for the ongoing hurricane season and potentially as a permanent hub in the Caribbean.