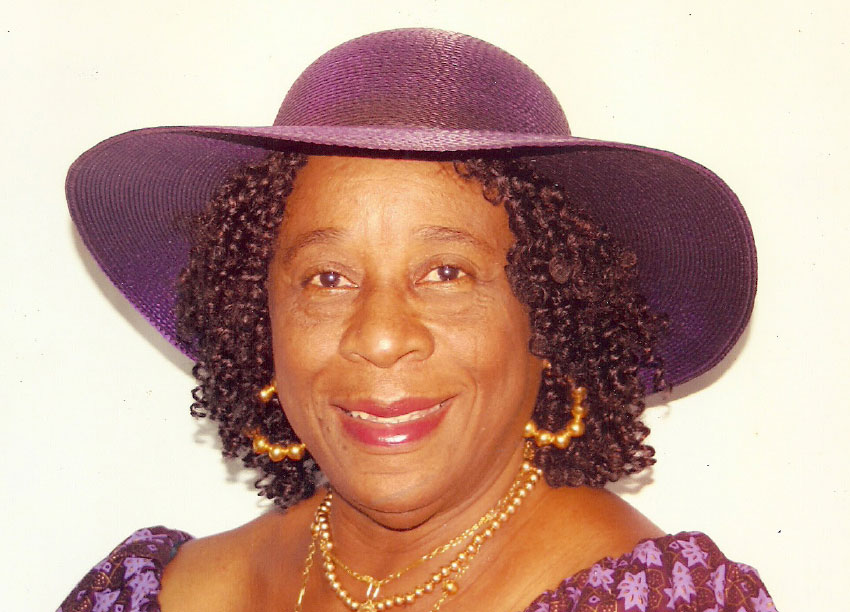 Denise Joyce Auguste was born in Laborie to parents Daranise Auguste and Alexander Sinclair Prescod in 1944. She was the second of their two children, with an older brother Robert who played a major role in her development.

Some of my earliest memories and thoughts of Joyce are of her as a young, talented netballer, still a school girl. So much began there for her as a future national figure. She played on the St Joseph’s Convent team and the Saint Lucia national team at 14 in 1957. She made the West Indies team which played in England in 1963.

Her beloved brother Robert arranged for her to enter Trinity College of Music where she graduated with a Licentiate in Musical Education in 1965. Having won a Commonwealth Music Award in 1966, she graduated in 1967.

Joyce returned home in 1967 and commenced the work that would make her a musical icon in St Lucia. She got involved in the teaching of music. She was appointed music Supervisor for Schools at the Ministry of Education and for the next thirty- two years, her tireless vision and passion for music led her to transform music in St Lucia. She was also the Music Tutor at the St Lucia Teacher’s Training College (1969-1985).

It was in the United Kingdom that Joyce developed an interest in and passion for her own national culture. She returned home determined to research and promote the folk culture of Saint Lucia. And this she did, most successfully, for the rest of her life. There is no doubt that for many years, she was the leader in promoting music education in schools and on Radio St Lucia.

She led the research work into the folk music and dances of Saint Lucia, drawing into her teams persons like Carlos Mynns, Clement Springer, Leton Thomas, Rumelia Elwin, myself and young talents like Ronald Boo Hinkson and Luther Francois; her forays into the rural areas, following the very pioneering work of  Harold Simmons and Eric Branford and American anthropologists like Daniel Crowley, led to the discovery and national exposure of folk singers and musicians Sesenne Descartes, Floreta Marquis and Rameau Poleon. Her remarkable work would lead later to the further explorations of Msgr Patrick Anthony and the Folk Research Centre.

Over the years she was to produce many National Day schools programmes, working with artistes like Virgie Alexander and Frank Norville. With Independence she produced major annual rallies, events for visits of international figures like Queen Elizabeth, Pope John Paul II and Nelson Mandela and for various regional governmental conferences. Queen Elizabeth is rumoured to have spoken of her remembrance of a notable farewell event organised by Joyce on the wharf where singers and dancers performed a moving rendition of Adieu Madras, Adieu Foulard.

There is no doubt that Joyce was in the very forefront of the arts and cultural renaissance that blossomed in Saint Lucia from the late sixties and well into the eighties. She formed the Hewanorra Voices which gave me my first recording opportunities. Her group recorded three long playing albums and later on CDs that featured the folk songs she had discovered in her research. Many of these have now become classics of Saint Lucian folk music. In the seventies this music was everywhere and brought a whole new sense of nationalism and cultural self-confidence to the island.

As late as 2014 she produced the album “The Magic of Sesenne”, drawing on her massive archives of music recorded in the field.  She had plans to produce more albums of music from her numerous tapes. I hope the FRC or CDF will take up that valuable and necessary work.

Joyce published a number of articles and booklets on St Lucian folk music- including “Oral and Folk Traditions of St Lucia’’ and “St Lucia Sings: A Collection of Contemporary and Folk Songs.”

Joyce was essentially an educator. She educated us. I learned much from her. I incorporated into my own compositions all I learned from her and her discoveries of the beautiful creole music of our people. She and I worked with Roderick Walcott on his classic musicals which brought the music of the Flower Festivals for the first time to the wider Saint Lucian public, the Caribbean and the world.

Joyce’s Catholic faith was well known. For many years she played the Cathedral organ and organised the choirs. She loved the old Latin liturgy and encouraged its use when she could. She encouraged young talent. Ms Elra Ermay, one of our leading singers, was discovered by Joyce and nurtured by her. Their friendship remained a lifelong one.

Joyce did receive national recognition for her work. She was highly appreciated by notable persons in the region like Rex Nettleford who used her music with his National Dance Theatre Company.

Among her honours were:

Minvielle and Chastanet Fine Arts Award for Music in 1985. Member of the Most Excellent Order of the British Empire (MBE) in recognition of her contribution to Saint Lucia’s musical culture, 1988; Induction into the Sports Hall of Fame for outstanding contribution to Netball, 1988; Saint Lucia Medal of Merit (Silver) for Music and Sports, 1989; in 2017, she received the Order of the British Empire, OBE, (Queen’s Birthday Awards).

Finally, that Joyce had her own share of disappointments which led to some bitterness in later life, was well known to her friends like myself. I hope that with her passing some compensation would be offered, some measure of final respect. I have already suggested that the Festival of Carols be renamed the Joyce Auguste Festival of Carols. I would like to see a school named after her to recognise her dedication to education. Perhaps the School of Music could bear her name. I hope the rich archive of her work can find a good home which would be available to researchers and students.

Joyce was a very kind and generous person. Many persons can speak, it they would about her care for them and their families.

Joyce was a very good friend for many years. We spoke often on the phone even up to a few days before her passing. Allow me to end with a brief poetic tribute I have written to honour my dear friend and colleague, Joyce Auguste:

Of rapturous Moments (For Joyce)

In Sonnets and Sonatas

A skylark’s outstretched wings in flight

Fluttering sound of a ground dove

In harmony with Anthem sung

One at vespers time.

In rapturous wonder thank the Lord

For symphony of life