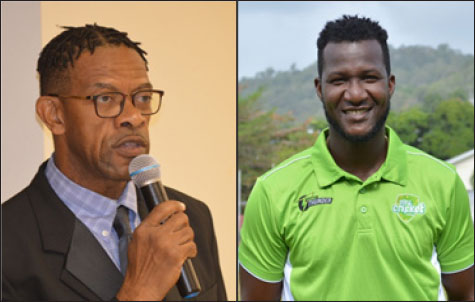 Asked the reason for the apology, the South Castries Cricket Association (SCCA) President Brian Calixte said, “It’s what was said in a response letter to Daren Sammy from the SLNCA President said in part: ‘This is virtual extortion Daren. You are holding a gun to the SLNCA to commit to payment which we do not have.’”

Calixte said, “Despite the fact that we are of the opinion that this was an unfortunate statement, we are still of the view that the response to Mr Sammy was disrespectful and an apology should be in order.”

“The South Castries Cricket Association encourages you to do the right thing by retracting the statement and offering an apology to Daren Sammy,” he stated.

The reply from the SLNCA president came after Sammy said he would opt out of the Dream Saint Lucia T10 Blast if the SLNCA does not meet the suggested $70.00 – $80.00 match fee per player; the initial amount by the SLNCA is EC$40.00 which could be adjusted if additional sponsorship is received.

Sammy, who has captured the senior Sportsman of the Year title eight times was also the winning captain of the West Indies team that won back to back ICC World Cup T20 Championships in 2012 and 2016.

He said, “The way sportsmen and sportswomen especially our local cricketers are treated in Saint Lucia must change, and this tournament was a great platform to do so.”

“It’s not too late to do it right with the players,” Sammy added.

When the VOICE contacted the SLNCA President to clear the air on a number of issues just before the start of play on Day 1 (Tuesday 23rd), he said, “I am caught up with last minute matters, so I cannot get into it with you now.”

According to Sammy, “I received word of the additional sponsorship. In light of this, I am expecting the association to do it right and show that they really appreciate and acknowledge the players; they are of great importance for this tournament.”

In light of all of this, however, Daren Sammy who is the captain for the South Castries Lions team has encouraged all the players to play despite his stance.

In responding to Sammy, SLNCA President Carol Henry stated, “Your decision not to play is sad, unfortunate and will have a negative impact and dire consequences for Saint Lucia. This places the tournament in jeopardy and at risk.”

He continued, “How does it look that local and international cricket icon, Daren Sammy is not participating in this tournament being held at the premiere venue named in his honour, on account of match fee issues?”

“This is virtual extortion Daren. You are holding a gun to the SLNCA to commit to payment which we do not have. SLNCA has worked extremely hard over the last two months to bring this tournament to fruition.”

In a response to Daren Sammy, SLNCA President said, “ I explained in my WhatsApp response to you last night and explained during the SLNCA Board meeting held on Friday, June 19th 2020, which you were a part of, the increase of player match fees from $50.00 to $70.00 will place the SLNCA in a budget deficit.”

This meeting was convened specifically to discuss issues around the proposed match fees of $40.00 per player which was deemed in some quarters as inadequate despite SLNCA executive repeatedly explaining that this was due to funding shortfalls and uncertainties as follows.”

According to Carol, “Consideration would be given to an increase of player match fees to $70.00 providing SLNCA receives additional funding to not incur a loss in hosting the tournament.”

The additional funding of EC$40,000 simply affords SLNCA the ability to meet the increased match fees of EC$50.00 per player and $75.00 per official. Total revenue is EC$187,000.00. Total expenses are now $194,000.00 having had to add additional, unforeseen website development expenses. We have a funding shortfall of EC$7000.00.This is a loss! We have sought and been unable to procure sponsorship from the corporate / business community in a time of crisis and economic downturn here and the world over.”

The importance of this tournament to Saint Lucia and the players cannot be over-emphasized, coming at a time when live cricket, training and competitiveness, was perforce aborted across the globe for the past three months since the advent of Covid-19, and while remuneration is always important for the players who make the sport possible.”

The SLNCA Chief also said, “Reference has been made to player match fees in the recently concluded VPL to assuage an increase here. The stark difference in financial security and liquidity of SLNCA and SVGCA is day and night. SVGCA has financial reserves, enabling them to offer more. The simple fact is SLNCA is not in a position to do so.”

I trust that the foregoing impresses on you, not only the reasons for the position taken with match fees, but also the importance of hosting this historic event, which will be Saint Lucia’s first sporting activity hosted since Covid-19 restrictions were imposed.”

In closing, “I trust you will rethink your position from an ambassadorial and nationalistic standpoint. The responsibility is yours, to support with staging a spectacle all of us can be proud of and avoid the ensuing disrepute and negative PR that will accrue. Please take ownership of that responsibility and exercise requisite judgment.”