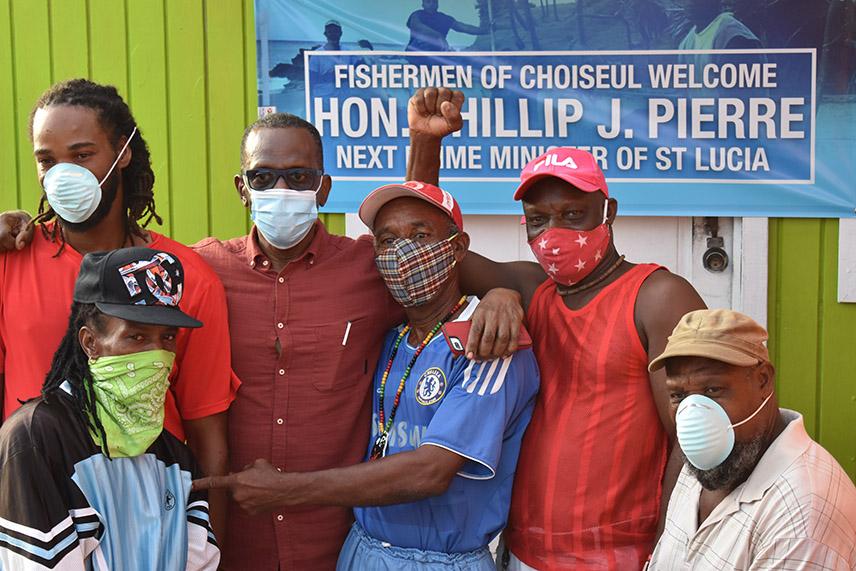 Political leader of the Saint Lucia Labour Party, Philip J Pierre received an appreciative welcome from Choiseul constituents last Saturday as talks of an early election spread across the country.

Although Prime Minister Allen Chastanet nor other leaders of the United Workers Party have not given any concrete hint of a snap election, talk is rife in the country that the prime minister may ring election bells this year.

But, even as these talks continue unabated, political leaders of the various political parties have been meeting and greeting people across the country.

Just about two weeks ago Prime Minister Allen Chastanet was seen in the Dennery area greeting and listening to constituents and fellowshipping with them.

Saturday, June 20th, 2020 appeared to have been a special day for constituents of Choiseul, as they hosted a series of successful activities to show their readiness for the upcoming general elections.

And although a Labour Party candidate has yet to be named for Choiseul, the residents invited Pierre to meet with them to outline his plans and ideas for the constituency and the country.  By the time this reporter got the news and arrived in Choiseul, the meeting was already held with business owners in Choiseul, who met with Pierre in Balca.

Following this, the opposition leader visited the community of Cedars, also known as Chou Tig, where residents greeted him with great excitement and enthusiasm.  In record time, when the word got around that Pierre was in the area, residents came from everywhere and expressed their support and confidence in his leadership.

A planned meeting with Fishermen from Choiseul was delayed by almost two hours, as residents all clamoured for an opportunity to speak to Pierre.  Residents expressed great confidence in Pierre and seemed overwhelmed of the opinion that his years of experience and scandal-free success as a parliamentarian is exactly what Saint Lucia needs at this time.

One resident, who spoke to this reporter said that although a candidate had not been named, she was very happy to meet Pierre as she trusted him to make sound decisions and believed that he was the best person at this time to lead Saint Lucia in those difficult and challenging times.  Some encouraged Pierre to make haste with the decision regarding a candidate as they were anxious to begin working with someone to prepare for the upcoming elections.  The dozens of residents who were excited to see Pierre, created a carnival and celebratory like atmosphere, many taking turns in introducing themselves and speaking briefly about the constituency.

After meeting a little more than one hundred people, Mr. Pierre then went on to meet with Fishermen of Choiseul, who shared with him the struggles and challenges they have had to endure over the past years.

Moses Jn Baptiste, the Labour Party Chairman and former Agriculture and Fisheries Minister joined Pierre and spoke of his party’s plans for the improvement of the Fisheries sector.

Throughout the entire event, residents wore masks and community members were seen providing hand sanitizer and masks to those who did not have any.  The event ended with a networking event at a nearby club, where drinks and Bar B Q pork and fish were provided free of charge by the business community of Choiseul.