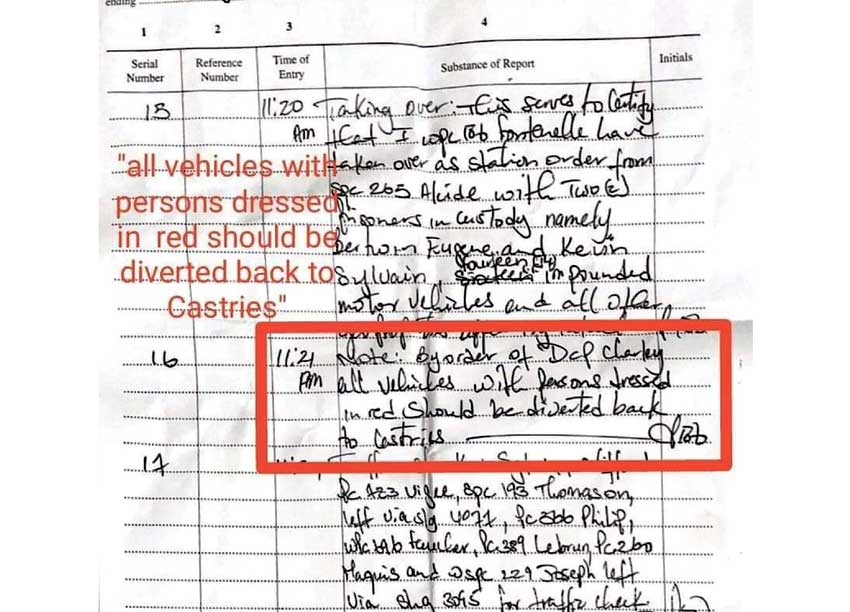 The Royal Saint Lucia Police Force has commenced an investigation to determine how a page from the Dennery Police Station Daily Diary was leaked into the public domain, an act that is considered illegal.

The page contained a note that fingered Acting Deputy Commissioner of Police Wayne Charlery as ordering officers of that station to divert to Castries all vehicles with persons dressed in the colour red passing through the area in a motorcade last Sunday.

This investigation is the latest in a series of headline grabbing news that emanated from an attempt by organizers to form an ‘anti-Chastanet’ round the island motorcade. The motorcade, which was supposed to have started at 11:00 a.m.  last Sunday on Jeremie Street, never got started at the scheduled time and place despite the crowd of people present and in readiness to commence.

Lead organizer of the event, former government minister Richard Frederick, was informed by police on Sunday that permission had not been granted for the mass crowd event and therefore it would be illegal to stage it. Frederick abided by the police commands and helped in dispersing the crowd.

However, another person was said to have caused motorists to assemble elsewhere and continue with the highly publicized motorcade that same day.

Shortly thereafter, Christopher Hunte, a talk show host and critic of the government, was arrested by police who said he breached Section 14 (C) of the Public Order Act which speaks to inciting any person to organize or take part in any public march or exhibition.

This new twist to last Sunday’s rather colourful, controversial and highly politically charged event, shines the spotlight on Charlery, who has been at the forefront of two recent back-to-back highly charged events which have seen COVID-19 protocols disregarded.

Charlery was the highest ranking police officer on the ground when the Black Lives Matter rally was held in Constitution Park last week Friday. Though permission was not granted for the event by police, Charlery and his team ensured that violence and other disturbances did not creep into the city’s peaceful atmosphere and that protesters adhered to the guidelines given by officers on the ground in the short space of time they were allowed to say and do what they did.

Two days later Charlery found himself on Jeremie Street attempting to stop an anti-Chastanet round-the-island motorcade scheduled to start at 11:00 a.m., an event for which permission had not been sought nor given.

Still mindful that any unnecessary attitude, behaviour or show of aggression by police officers would rile the crowd of mainly anti-Chastanet protesters, Charlery and his team ensured that not only was the illegal event not held, but that persons on the scene came to no harm, nor was any property damaged in getting the organizer to call off the event.

The excerpt from the station’s daily diary has since gone viral. Further, this reporter has been reliably informed that the excerpt or page making the rounds on social media is authentic.

The note ascribed to Charlery that was logged in the station’s daily diary appears to be troubling since Acting Police Commissioner Milton Desir, on a National Television Network programme Tuesday, said that wearing red last Sunday while part of the motorcade did not constitute an offence.

The page from the station’s daily diary gave a time of 11:21a.m., as the time the directive was logged in the diary and which reads thus: “By order of DCP Charlery all vehicles with persons dressed in red should be diverted back to Castries.”

The investigation, The VOICE has learned, will be from both ends of the spectrum in that it will look into how the page from the station’s daily diary, which contained Charlery alleged missive made it into the public domain. It will also seek to determine who Charlery received the missive from, to so direct officers at the station in Dennery to turn vehicles with occupants wearing red back to Castries that Sunday.

Charlery was contacted by this reporter yesterday, however he declined to address his alleged part in the leaked document, stating however that while he would like to speak on the matter, he does not want to jeopardize the ongoing investigation.

“As much as I am longing to make a statement, I have to allow the investigation to run its course,” Charlery said.

Sources close to the investigation have confirmed that what appeared in the diary is a very truncated version of the conversation that took place between Charlery and the officer at the Dennery Police Station, a conversation that was between three to five minutes in duration.