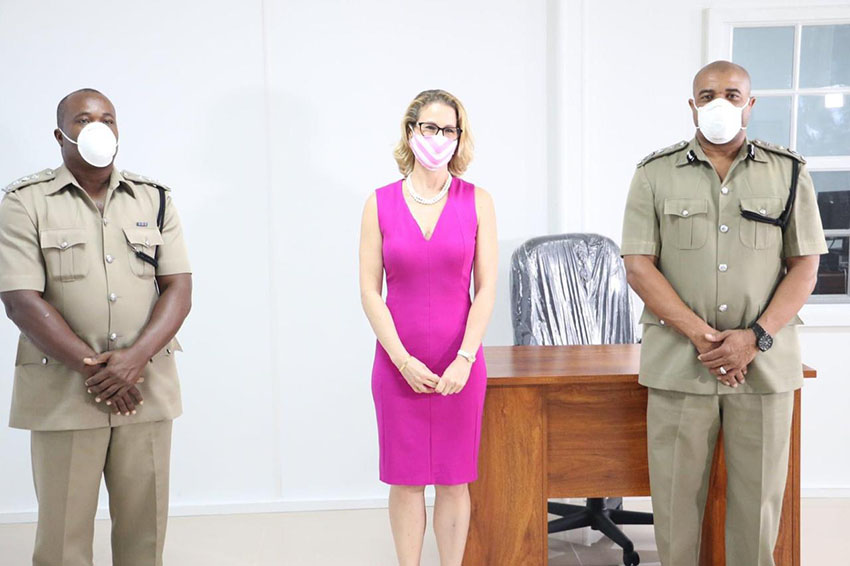 The Make it Happen Foundation continues to bring ease and comfort to the workspaces of our servicemen and women. The latest beneficiaries are the hardworking Traffic Officers of the Royal Saint Lucia Police Force.

Since the Foundation’s inception in 2016, its founder Mrs. Raquel Du Boulay Chastanet, the wife of Prime Minister Honourable Allen Chastanet, has spearheaded several initiatives to improve the working conditions of police and fire stations island wide. This support has also been extended to the Bordelais Correctional Facility, some sporting facilities, and building libraries at and refurbishing three Primary Schools.

On Tuesday 6th May 2020, the Traffic Department of the Royal Saint Lucia Police Force (RSLPF) at an official handing over ceremony received thirty-thousand dollars ($30,000) worth of on the John Compton Highway. This gesture comes on the heels of a recent move of the traffic department from their long time dilapidated headquarters on Bridge Street to the new space conveniently located on the John Compton Highway.   Speakers at the handover event referred to the move as being one “from hell to heaven” and of their great relief having decent working quarters at last and being centrally located.

Acting Deputy Commissioner of Police Mr. Wayne Charlery spoke at the ceremony expressing his heartfelt thanks on behalf of the Traffic Department and how this demonstration of love and care will go a long way in assisting the work of police officers.

“We are very proud of our new offices of the Traffic unit and we are extremely grateful to Mrs. Chastanet for providing the furniture which goes along with the great ambience,” said Charlery. “Notwithstanding that we are in unprecedented times, we must note that we have unprecedented waves of care and love especially from the Make It Happen Foundation.  Your demonstration of providing some level of comfort for police officers around the island and fire officers is a beacon of hope and assurance for us and we want to thank you for that.”

Mrs. Du Boulay-Chastanet expressed that the Make it Happen Foundation was pleased to support the Traffic Department and acted swiftly when the request was made.

“We really wanted to ensure that as you move into a new facility everything should be new. This is important to lift the morale of the officers; working in an environment where they can feel valued and respected and quite frankly more comfortable is critical to the efficient execution of their duties,” Mrs. Du Boulay-Chastanet added “There will never be enough funding for all the needs of the police force and firefighters, but if we are talking about raising standards and demonstrating how valuable these service providers are to us as a country, then we need to try to provide the whole package.”

The donation was made from the proceeds raised at the 2019 Officers’ Ball – the annual hallmark event of the Make It Happen Foundation which raises funds for law enforcement and also highlights the service and accomplishments of long standing service members.

The Make it Happen Foundation thanks all companies and individuals who continue to support its fundraising efforts and recognizes that without them, its ability to improve the day to day working conditions of police and firefighters would not be possible.