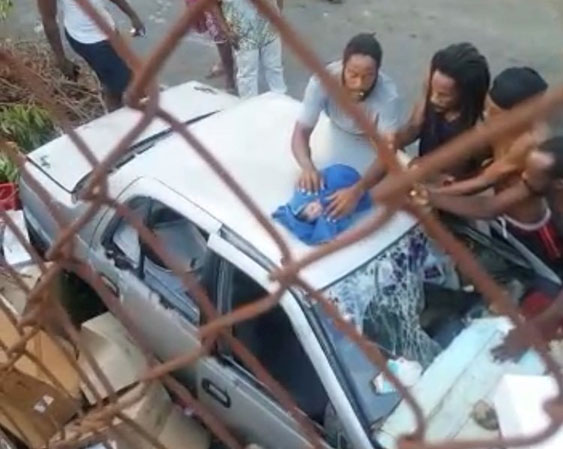 Not for the first time, a baby was discovered discarded and alone in the streets of a local community this week. Unlike has been the case in too many instances in the past, the baby was thankfully found alive by members of the community.

Residents were in pure disbelief at the discovery, many questioning how someone could carelessly leave a newborn by the roadside in a bag. They’d never expected to wake up to such a tragedy, but at the same time, were relieved to find the baby still showing signs of life. No one knew straight away how long the baby had been out in the elements, but many suggested that it must have been overnight. People were disturbed that “such a beautiful baby” would be left alone with no mother or father in sight, but the truth of the matter is, no matter what the baby looked like, no newborn or child for that matter, should ever have to experience what this baby did.

This story had a fortunate ending, thanks to quick thinking citizens, but many others have not. This is not limited to the babies or foetuses that have been discovered in the most horrendous places, but those who don’t see the light of day due to the ever-increasing number of abortions performed here and abroad. In fact, a doctor who performs abortions locally noted recently that abortions were becoming too commonplace, in that women were relying on them just as they would a morning after pill, which was dangerous.

The discovery of the newborn this week has reignited the pro-life, pro-choice conversation. Most notably in this respect, in 2016, the island’s Health Minister Hon. Mary Isaac said in an interview that women should have the right to choose if they wanted to have an abortion. Her views were markedly pro-choice, unlike another government minister who in the past spoke out against abortion, Hon. Sarah Flood-Beaubrun, who currently serves as Minister with responsibility for External Affairs. In 2004 Flood-Beaubrun spoke out against a bill legalizing abortion under certain circumstances. It was reported that she was herself expecting a baby at the time. She was later dismissed as a minister. Asked years later about her views on the matter in a Saint Lucia where conservative pro-life views on abortion seemed to have evaporated overnight, Beaubrun stood firm in her view that the best way to deal with crisis pregnancies was by providing help and support to mothers.

The mother in the most recent case did not choose the path of abortion, but instead chose life.

The only sure thing we know in this story so far is that the baby was found at the roadside. It is unclear whether the mother or someone else left the baby there in that bag, but it is likely in the days to come that police will intensify their efforts to piece together this mystery.

For most of us, there are many questions: Was it a young and desperate mom? An abusive situation? Was she in fact waiting and hoping that someone would find her baby? Was she forced to get rid of the baby? Did she panic, not knowing what to do next?

All we can do is speculate. A singular truth in these scenarios locally is that expectant mothers, and new mothers need more support. There are so many gaps that need to be filled, and postpartum depression though serious, is not the only thing we need to worry about. If we can answer the questions of whether we give mothers-to-be and new mothers the support they need for the very survival of themselves and their babies, then we can start to get some answers to the questions of why people do the things they do. We need answers to protect these innocent and vulnerable babies, and in order to help mothers make smarter decisions without feeling that they are backed into a corner.