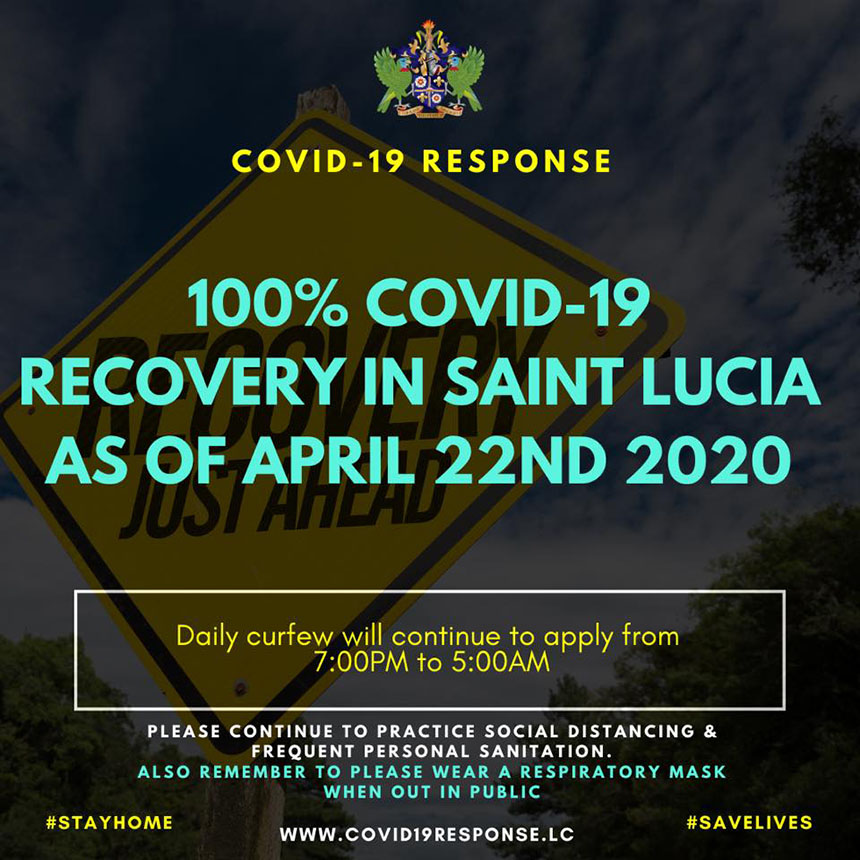 Thus far, it is fair to say Saint Lucia has been doing well in the fight against Covid-19, despite how panicked many people were in the earlier stages of the global pandemic. Of the 15 cases the island has recorded so far, all have made full recoveries, as announced by the island’s Chief Medical Officer, Sharon Belmar George. The CMO has become something of a celebrity locally ever since the pandemic, with support for her guidance in this situation putting her right alongside some of the women on the global stage who are at the forefront of leading countries out of this grave state of affairs.

Pertaining to the announcement that as of this week the island was Covid-free, at least for the time being – that news certainly is applaud worthy considering what is happening elsewhere in the world. Notably, in this list of people who are now out of the danger zone, included was an elderly woman and others with underlying health issues. If ever there were a hopeful sign for the more vulnerable in our population, it was that news. At the end of it all, how Saint Lucia and other countries who have stayed on top of Covid -19 managed to do so is something worth exploring. Even though some experts warn that no one is in the clear, we certainly should celebrate the little wins as we all come together to fight for our very livelihoods.

It goes without saying that Covid-19 came out of left field. As the weeks turn into months, even the medical professionals don’t seem to have figured what exactly caused its wide spread, and neither have the couch analysts who are also trying to decide which they believe, Chinese bat eating or 5G conspiracy theories. Where the latter is concerned, many people are unaware, or seem to have forgotten that an important aspect of conspiracies is that they require a small number of co-conspirators, “two people can keep a secret longer than 22 people”, according to J Warner Wallace, who in a YouTube video speaks to what makes conspiracy theories untenable. Granted he’s speaking about the resurrection of Jesus Christ, but the same rules apply. That of course is not to say either of these subjects doesn’t need to be looked into further, especially 5G in regard to still lingering, unanswered safety questions pertaining to the effect on human beings that come up with every web search. But that’s another topic entirely.

Back to Covid-19. As we progress hopefully to the end of this pandemic, it is refreshing to see the commercial sector stepping in to assist the island with this battle, and with the mission of returning to normalcy. Their efforts are right alongside the regional and international organizations that have sprung into action to not only help flatten the curve, but to help manage the health and economic aspects of the greatest crisis most have seen in their lifetimes.

In the beginning of all of this, some believed the government took too long to respond to the crisis. What actually happened was that our government did act, and fast. So much so that the borders were completely shut down, and many of our own citizens were locked out, left stranded in foreign spaces, some not sure when they would see their families again. This was the case in many other islands. Among the most affected were cruise ship workers who were trying to make it home in time but were caught up in quarantine situations. This week there were steps in the direction to bring these workers back home with tourism minister Dominic Fedee announcing that the government was working on getting over 500 of these workers back into the country. Of that number, seven Saint Lucians employed with Norwegian Cruise Line returned to the island this week. All will have been placed on mandatory quarantine, as will any other cruise workers coming into the island.

Even with the fact that the island has no more active cases, we are still far off from an ‘all clear’, and that was most evident this week with the extension of the State of Emergency right through to the end of May. It is only after the dust settles, which seems still far off, that Saint Lucia and the rest of the world will know the true damage caused by the virus that made the world stand still.