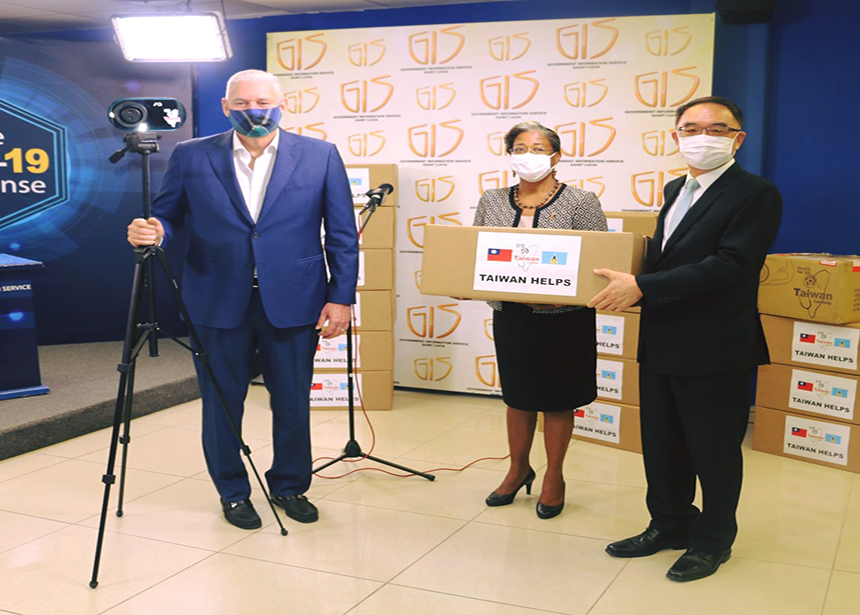 The Embassy of Taiwan and the Government of Saint Lucia held a joint donation ceremony at the Government Information Service (GIS) studio in the morning of 24 April 2020. H.E. Ambassador Douglas Cheng-Tsung Shen, Hon. Prime Minister Allen Chastanet, and Hon. Mary Isaac, Minister for Health and Wellness attended the ceremony.

In his remark, Ambassador Shen stressed that Saint Lucia is one of Taiwan’s most important allies in this world. He showed appreciation to the Saint Lucian Government for supporting Taiwan’s efforts to participate in multiple international organisations.

Ambassador Shen emphasized the importance of Taiwan’s participation in WHO. He stated that Taiwan can contribute to the containment of the pandemic. He announced, “We believe Taiwan can help and that Taiwan is now helping,”

At the end of his remarks, he reiterated his faith that under the great leadership of the Honourable Prime Minister Allen Chastanet, the battle against the virus will be won.

Prime Minister Allen Chastanet stressed that “now is the time” for Taiwan to be a member of WHO.” He said, Taiwan is on the frontline battling COVID-19, and has been an exemplary leader of combating the disease by benefiting the world. He urged WHO to set politics aside and consider Taiwan’s participation from the humanitarian perspective. He also reaffirmed that Saint Lucia will continue to be a voice in all the international organisations for supporting Taiwan.

Minister Isaac said that the thermal imagers donated by Taiwan will facilitate the detection of possible infection of coronavirus “from the airport or anywhere else.” She thanked Ambassador Shen and said that it is wonderful for the diplomatic corps to chip in.

Ambassador Shen then symbolically handed over a case of face masks and a set of thermal imager to Prime Minister Chastanet and Minister Isaac. After the ceremony, they posed for a photo with all of the donated equipment in the GIS studio. The equipment was then sent to the Ministry of the Health and Wellness.

In addition to the aforementioned equipment, Taiwan is also expected to donate medicines such as Chloroquine (CQ) and Hydroxychloroquine (HCQ) for the treatment of COVID-19.