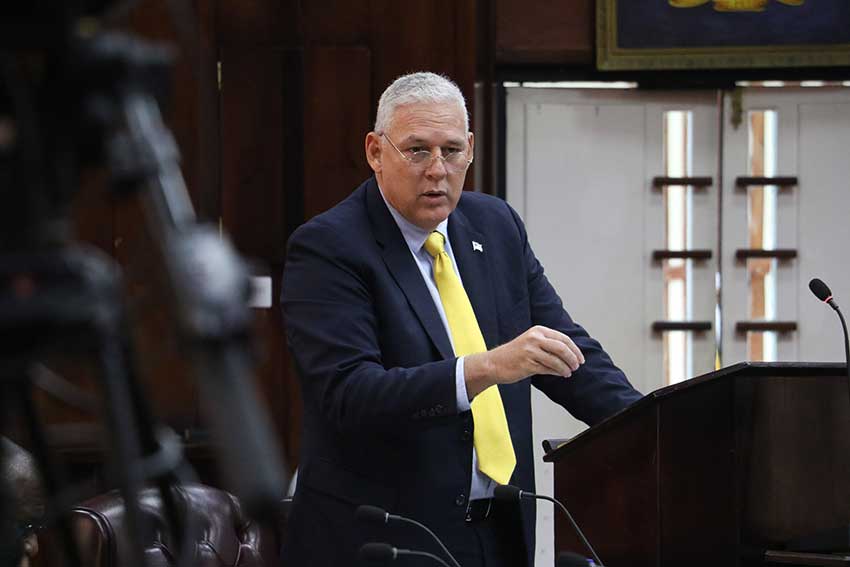 THE Saint Lucia Industrial and Small Business Association (SLISBA) says it is waiting with great anticipation for a meeting with Prime Minister Allen Chastanet, even as members call for some sort of assistance from government, some of whom say they are facing ruin, especially those with businesses that depend on tourist arrivals.

The Association’s expectation of a meeting with the prime minister was revealed at a press conference yesterday at its headquarters in La Pansee.

The Association, which has members comprising Saint Lucia’s largest sector of beauticians and food service providers, small shops, barbers, minibus drivers, taxi drivers, contractors, small manufacturers etc., says the meeting with the prime minister was announced at a virtual press conference held last Friday. During the conference, the prime minister stated that he would also meet with taxi associations.

“Prior to that announcement, the many small business owners, minibus drivers as well as taxi drivers who were present at yesterday’s press conference were not consulted. For the past few weeks, SLISBA has been inundated with calls from members enquiring about the coronavirus and what national plans were in place,” said Melita Ashford, SLISBA’s Public Relations Officer.

She said that in response to enquiries from members, general information was circulated about the virus and a lecture was held to sensitize them about the most up to date preventative measures.

SLISBA was also represented at the stakeholders meeting which was held at the Harbour Club last week, however, this meeting comprised mainly of stakeholder presentations which were prepared prior to the event and provided no real opportunity to present the views, recommendations and perspectives of the small business sector, Ashford noted.

In fact, one contractor who was present at the SLISBA event said that he is not prepared to simply stop the work that he was doing, or to pay his staff, because he himself expected to be paid upon completion of work this weekend, however staff have not showed up and he has no idea how to handle the situation.

“We are on the front lines and should have been consulted just like the bigger players from the Manufacturers Association, the Chamber and the SLHTA,” said one of the minibus drivers who was present.

His view was supported by some of the taxi drivers who expressed great frustration with the level of recognition and consideration given to small operators in this most crucial time.

Minibus drivers, for example, said that before their last meeting with SLISBA on Sunday March 22nd, there had been absolutely no communication whatsoever with the sector. They, like all small business operators, only heard the announcement on the radio and say at no time were they given an opportunity to share their views or make recommendations in light of the crisis.

Hermia Lord who is the Executive Secretary of the Gros Islet Minibus Owners Association said her Association had been concerned about COVID-19 since it appeared in the country.

She said that bus drivers were told to carry only ten passengers per bus however this proved easier said than done as both passengers and some drivers simply refuse to adhere to those guidelines.

“This morning it was very challenging for us because the passengers were loading the bus saying they want to get to work. Some drivers complied, others did not. We had no police presence on the ground this morning. Only the dispatchers were on the ground who themselves were working a shift system,” Lord said.

“People are not understanding the seriousness of coronavirus in Saint Lucia and I saw it firsthand this morning. People do not care. Right now, we have 169 buses each of which must work two days a week. We have gone down to a shift system and that amounts to a loss of revenue,” Lord said.

“We need the government to sit down with us, to work with us so that we can continue in the sector, giving the service that we want to give, although it puts our drivers at risk. We need to know what’s in it for the sector,” Lord said.

She is not the only one complaining.

President of the Taxi Union Lucien Joseph said following the prime minister’s press conference his members were concerned and came to SLISBA to find out whether government had something in place for taxi owners who will be greatly in distress with airline and cruise ship cancellations to the island.

“We (taxi owners) are in this situation today because we were not treated the way we were supposed to have been treated in the tourist industry. We have been marginalized, undermined and are the weakest link in the chain,” Joseph said, noting that if concessions were given to the Union members, today they would not be in the financial mess some of them are in.

Robert Skeete, better known as Chef Robby spoke of a downhill slide underway at his restaurant due to the ban on cruise ships at this time.

“Let’s say I was to make seven or four thousand dollars per ship. With the cruise ship season now cancelled, the monies I was anticipating to put aside for rent and other things, come the off season I am not able to do so therefore I would like to know what’s in place for small businesses like mine,” Skeete said.

According to Ashford, SLISBA has been meeting with its members in all sectors which it represents, something that will continue through special meetings which will be characterized by social distancing as well as through the use of online platforms.

Representatives of the Gros Islet Mini Bus Owners Association and the National Taxi Council expressed appreciation for the continued collaboration with SLISBA, which has been tasked with continuing the work it has been doing over the years, in bringing all players together from the many sectors, which have often been overlooked. They expressed great optimism for the ongoing process of engagement and the prospect of finally getting an opportunity to have consultations with senior Government officials.