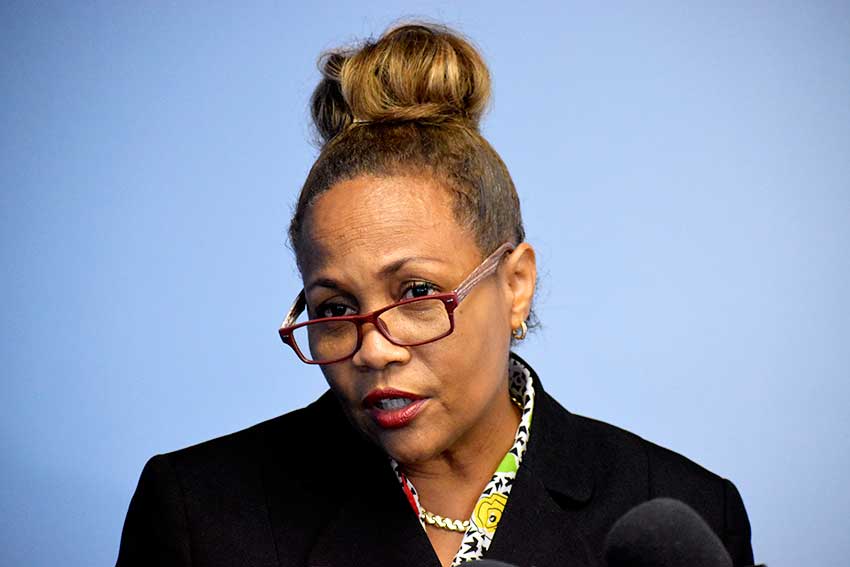 THE Cultural Development Foundation (CDF) has a new Chairperson. Her name is Jeannine Michele Giraudy-McIntyre.

Giraudy-McIntyre is also the current President of the Saint Lucia Senate, chairperson of the Independence Planning Committee for Independence 41 and an acrylic, pastel and oil painter of some note.

Her appointment was made known by the Minister responsible for Culture Fortuna Belrose who explained that the CDF Board’s term of tenure expired in September last year.

“In keeping with the thrust in where we want to go as a government, the Orange Economy and ensuring that we have greater synergies with all sectors, we did review our board and it was important for us to have someone who understands where we want to go and how we are going to get there,” Belrose said.

Minister Belrose said Giraudy-McIntyre was the most eligible person for the government, at this point in time, to be at the helm of the Foundation.

Giraudy-McIntyre’s appointment is her first association with the CDF; however that seems not to have deterred her in leading an organization that is so integral to the development of the island’s culture.

She told reporters how pleased she was to be the Foundation’s Chairperson and how much of an honour it is to be part of the policy making body of cultural and creative development in the country.

“I see the CDF as the home of the artistes and so in conjunction with the Ministry (Culture) we at CDF want to provide the necessary legal frameworks. We want to provide training for the business of art which sometimes is there but which the artiste sometimes cannot capture…” Giraudy-McIntyre said.

The new chairperson of the CDF said the goal is to create industry pathways for all artistes to benefit from the new and vibrant Orange Economy the government is pushing.

“We have done a lot but now is the time to create the synergies between the ministries, the ministry, the artiste, the various agencies and the associations to which these artistes belong,” she said.

The CDF chairperson believes that the success of this will not simply rely on the policy makers but also on the artistes.

“I am a lawyer by training, and I intend to bring my legal skills to bear on my work at CDF regarding copyright, effective legal vehicles and interpretations of various acts. But more than that I am also a trained professional fine artiste. I paint in oil, acrylic and pastel and my paintings hang in public and private collections, locally, regionally and internationally,” Giraudy-McIntyre said.

She associated herself with the artistes the CDF works with and for by stating that she had walked the lonely, difficult, sometimes draining, yet exhilarating, inspiring and really awesome road of the artiste, from amateur to professional.

“So, I will approach this task not only as a policy driver but also as a recipient artiste determined to sell his or her craft to the world. I will work with seriousness and vigour and believe now is the time to take us to the next level, now is the time for the Orange Economy,” Giraudy-McIntyre said.

She told reporters she was quite capable of performing in the position and that her tasks were not insurmountable.

“I will be more about guiding policy rather than the day to day activity of CDF which I will leave in the hands of the CEO and the staff there,” Giraudy-McIntyre said.