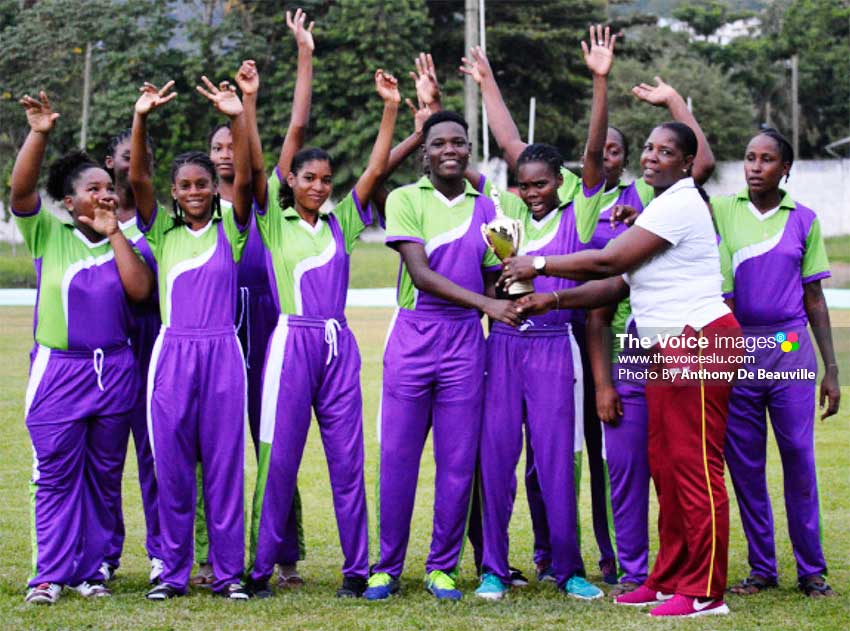 WOMEN’S participation in sport of Cricket has a very outstanding history. It is one marked by a high level of prejudice and inequality but also one filled with major accomplishments by our female athletes and important advances made for gender equality and the empowerment of women and girls among the many remarkable achievements.

Like other women’s sports, women’s cricket is faced with its fair share of challenges. If it was not so, perhaps Central Castries would have formulated a team and so would all of our affiliates who have not embraced our women who play the sport. One may recall the initiation of two structured Domestic leagues and subsequently the Kenneth Arthur softball competition which generated the most entertainment in which a record number of ten (10) teams participated.

Unfortunately, the Acynta Auguste 50 over Competition was not contested in 2019 because the Windward Islands team was selected without our female players being viewed on a level playing field as a measuring tool for selection. Players were hand-picked by the Windward Islands Head Coach and selectors based on the 2018 team selection. Thus, a high level of advocacy was done and an email was sent to the Windward Islands Cricket Board of Control (WICBC) expressing the Former Third Vice president’s concerns and dissatisfaction but “the price of the hard balls” remained the same. We were also having difficulties accessing playing venues which were conducive for our females to utilize and transportation to and from match venues were sometimes paid for by the respective affiliates.

During the period under review, the SLNCA lost Laborie to their religious beliefs among other domestic issues and medical challenges after they played one match in the 2019 Alicia John T/20 Domestic League. Notwithstanding the above stated challenges, the Alicia John T/20 was keenly contested during the months of June – August, 2019 between Choiseul, Gros Islet, South Castries and an under 17 Development team. Again, South Castries emerged winner having defeated Gros – Islet convincingly to win the above stated competition for the sixth consecutive year.

At the conclusion of the 2019 domestic league an all-star team was selected based on outstanding performances and a squad of twenty-five players was chosen for ongoing training in preparation for the 2019 National and Windward Islands team selection.

At The Windward Islands Level the St. Lucia National Cricket Association hosted the Inaugural Windward Islands Competition from 13th -22nd April, 2018. The competition which was decentralized and played at two venues in the south and the East Coast of the Island was well received by the sporting fraternity. The support from the town of Vieux Fort and the Mabouya Valley was tremendous and Mr. Al Prince, Mr.Charlery, Mr. Oliver and Mr. Jules must all be commended for their assistance and support.

Three players were selected on the Windward Islands senior women’s cricket team in 2018-2019 and twelve year old reserved player, Zaida James was called to replace Grenadian, Aria Fortune who became incapacitated during the Cricket West Indies tournament. Zaida also gained selection on the 19 and under women’s cricket team along with Allyiah Alfred and Former West Indies female cricketer, Qiana Joseph who went on to replace Nerissa Crafton as Captain.

On August 24th 2019, Ms. Eugenia Gregg was appointed chairperson of a Windward Islands Women’s Cricket Committee along with Grenadian, Lydia Edgar; Vincentian, Samantha Lynch, and Dominican, Kurel Vidal. The committee members only received formal letters of appointment on September 1st 2019. It was with a sense of accomplishment that she informed the SLNCA Board of Management of the first WICBC Women’s Cricket committee meeting which was held on October 31st 2019 and the following recommendations were made:-

(1) It was recommended that an annual Windward Islands Women’s Cricket Tournament/Competition be featured annually on the WICBC Calendar of activities and implemented during the summer vacation; (2)The establishment of an academy as a nursery for the holistic development of female cricketers within the respective Windward Islands; (3) Each Windward Island should send a proposal requesting the implementation of female development programmes and competitions within their school systems; (4)That there must be continuous and specific fitness training programme for Windward Islands female cricketers; (5) WICBC to provide more avenues for our female players to engage in Cricket Development Programmes and competition both at the WICBC wishes to applaud the efforts of the Ministry of Education and the Ministry of Youth Development and Sports for their remarkable support. Post World T/20 the St. Lucia National Lottery Authority (NLA) funded this ongoing development programme. With the assistance of the coaches and the SLNCA’s Operation Manager, thirty five (35) under seventeen players were attendees of the SLNCA elite women’s cricket development programme.

The programme’s primary objective was geared towards the holistic development of the young athletes at the adolescence stage of development and to provide an avenue for continuous growth and development of upcoming players. Additionally, the programme gives them an opportunity to showcase their talent and seek to expose players to further competitive rivalry at a very tender age, by participating in the SLNCA Women’s domestic leagues as development teams. That objective was realized during the first phase of the programme.

Participants of the programme are from all eight educational districts and some current national players are also participating and sharing their experiences. Facilitators of the programme are the SLNCA’s Operation Manager (Brian Calixte), the former Third Vice President and SLNCA’s Coaches in the persons of; Mr. Eldridge Charles, Mr. Wade Clovis, Mrs. Philippa Thomas Eudovic, and Mr. David Oliviere. The parental support has been quite visible and our recently crowned Windward Islands queen, Zaida James is a beneficiary of the said programme.

The World T/20 Legacy, SLNCA, NLA, Elite Women’s Cricket Development Programme was the foresight of the SLNCA Operation Manager. As the former third Vice President, who was charged with the development of women’s cricket island wide, it would be an injustice to take all the credit for such a worthy Women Cricket Development Programme. Society must acknowledge the level of sacrifices, commitment and honorable services that Mr. Brian G. Calixte has given to the continuous development of St .Lucia’s cricket and functioning of the day to day operations of the SLNCA.

It was after much discussion and brainstorming of a way forward to develop the Women’s Cricket in Saint Lucia and an attempt to broaden the small pool of female cricketers, the SLNCA welcomed the planned programme. The theoretical component enhances the players’ practical skills and from a very tender age athletes are exposed to holistic development programme . At the conclusion of the 1st phase of the programme, a closing ceremony was held at the Bay Gardens Hotel at which the Director of Sports was the guest speaker. Mr. Patrick Mathurin must be applauded for his inspiring delivery on Conflict Resolution and for his continued support.

This Women’s Cricket Development Programme is not limited to only students of the eight educational School districts and it is for that reason a plea is made to young ladies especially from the rural areas who may have fallen by the wayside and has a desire or sporting potential to join the programme which can be an avenue to create lifetime changes.

SLNCA’s primary challenge to implement a programme of this magnitude was the unavailability of the Daren Sammy Cricket Ground. As a result, the Programme was moved to the Dennery cricket ground and the Clendon Mason school compounds. The School Information technology (IT) room was also utilized for power point presentations and other theoretical sessions. For this kind gesture the former Third Vice President expresses her sincere gratitude to the school principal, Mr.Fregis.

The Saint Lucia National Lottery Authority (NLA) has provided continued sponsorship for this development programme and the SLNCA’s Former Third Vice President is indeed thankful for the sustainability and continuity of the U17 Development Programme. Additionally, a Proposal was presented to the Ministry of Youth Development and Sports soliciting the implementation of a Women’s Cricket Development Programme within the school system.

Each cricket cluster is assigned two (2) coaches (head coach & assistant coach) along with a female mentor. The cricket clusters are also equipped to host and educate twenty-five to thirty (25-30) participants who will grasp the basic skills of the sport, widen our pool of female players and provide that nursery which the Former Third Vice President has pleaded for since her active involvement towards the development of the sport.

To provide avenues for optimum growth and success of the sport, women’s cricket needs a major sponsorship and a greater commitment by all stakeholders. Our affiliates must take ownership and play a more pivotal role in the planning and the implementation of the women’s development programmes.

Mabouya was once a force to reckon with when their playing facility could not be compared to what it is today. So were Denney, Laborie and Central Castries. It is high time that Micoud, Mon Repos, Babonneau, Vieux-Fort North and South revitalize or reintroduce women’s cricket in their respective districts. Soufriere and Anse –La-Raye must attempt to formulate a women’s team.

There is a need to provide our female cricketers with the same civil liberties and privileges as our male counterparts and I urge the Board of Management (BOM) to make it compulsory for all our affiliates to provide an avenue to assist our young lasses to develop holistically through the formation of a development team.

It is the former Third Vice President’s desire to commend those affiliates who have continually embraced our female cricketers (Choiseul, Gros Islet, and South Castries) she also wishes to express her gratitude to the Board of Management and the SLNCA executive for their remarkable support over the past six (6) years. No one officer can do so much on their own and she will not take all the credit for all the major accomplishments during the period under review. She promises to remain committed to the roles assigned to her and to continue raising her voice as an advocator to address the plight of our female cricketers within the constant male dominated system of administrators.

Ms. Gregg who is a former National and West Indies female cricketer, member of the CWI Cricket Committee and Chair person of the WICBC Women’s Committee looks forward to the current SLNCA Administration making Women’s cricket a compulsory component which must be featured by all affiliates as a criteria to participate in all SLNCA’s Domestic Leagues.