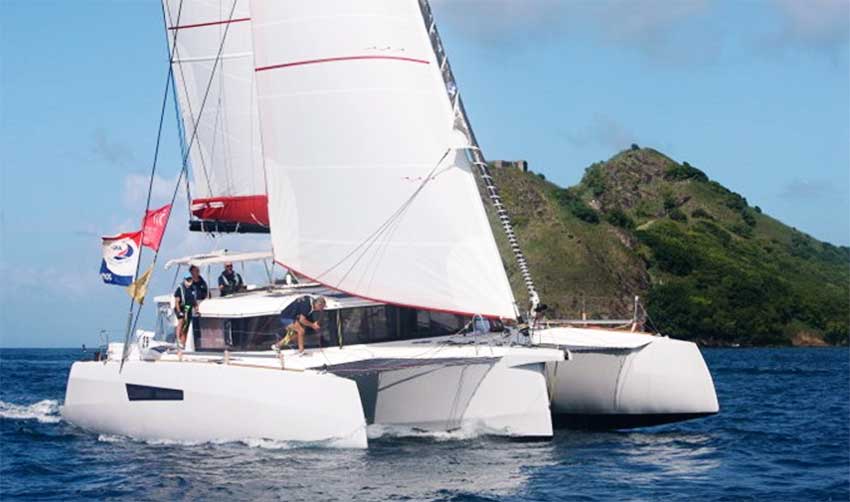 SERENADED by local steel pan music, the first ARC+ mooring lines to be secured to the pontoon at IGY Rodney Bay Marina in Gros Islet belonged to Minimole, a Neel 47 type boat. After an 11-day crossing, the crew of six adults, five from Italy and one from France, have experienced a thrilling crossing covering a total of 2,122 nautical miles since their departure in Cape Verde on Thursday 21st November 2019.

After stepping ashore, skipper, Marco Corno, explained, “We had a fantastic trip with really fantastic weather. After 50 nautical miles out we took a big advantage and then we hit a slow zone and everyone was catching us up but we managed in the last 2 days to make it up. I am a bit surprised to be first. This is the first time for us and it’s a fantastic dream.”

In hot pursuit were some Italians on Aluaka, a Stadtship 54 vessel, closely followed by Libeccio a Catana 65 and Sunbird a CNB 60. Amongst the leading pack is the Pogo 36, Amarys, who for a smaller boat kept pace with the big boys and has had a super-fast voyage across the Atlantic.

The ARC+ fleet experienced good trade winds conditions with the final run towards Saint Lucia seeing perfect easterly breezes of 15 -18 knots. During the crossing many boat crews wrote daily blogs sharing their special moments as their final destination drew. Zan recorded constant trade winds and under spinnaker they were making a fabulous speed of 8 knots out of just 15 knots of wind.

Other moments shared on the World Cruising Club website include Cuvee celebrating their ‘half-way’ mark with Magnum Ice Creams while Jess on family boat, Oyster Moon, overcame her seasickness and enjoyed frankfurters and beans for breakfast. Various fishing tails get a regular mention as do the spectacular sunrises and sunsets. Amari’s crew expressed it this way: “getting away from it all provides a spacious back yard and spectacular views.”

It’s safe to say that since the fleet’s departure from Las Palmas de Gran Canaria on Sunday 10th November, they have experienced all that the Atlantic has to offer and much more over the past four weeks.

For many crew members this was an adventure of a lifetime and reaching the Caribbean was an enormous achievement. Stepping onto dry land was a very emotional time for them and as the pontoons started to fill, so did the atmosphere in the marina. Each boat was presented with a welcome basket complete with a bottle of local rum and the World Cruising Club ‘yellow shirt’ team working around the clock to assist with each arrival, Courtesy of the Events Company of Saint Lucia.

In the coming days, Saint Lucia will be looking forward to welcoming the ARC+ fleet where some 400 crew members have an exciting programme of events organized for them on arrival. The social events begin with the Saint Lucia Tourist Authority Welcome Cocktail on Saturday 7th December, at the Harbor Club Hotel.

In the meantime, and for those wishing to become more acquainted with the local area, there is the opportunity to take a tour of the north of the island, learn about the local cuisine at a Farmers Market and watch a Chefs Demo held in the grounds of the Marina. Further events taking place include sundowners at local venues and the eagerly awaited prize giving where the results for Leg 2 of ARC+ 2019 will be revealed.

Saint Lucia eagerly await the arrival of the rest of the fleet who are expected to make landfall over the next five days.

Meanwhile, Saint Lucians wait eagerly for the arrival of the first boat competing in the 34th edition of the ARC and what makes it even more interesting is the date and time of arrival of Challenger 1, the boat the ARC Youth Team is competing on. On board Challenger 1, are six young Saint Lucians looking to complete their maiden voyage across the Atlantic.