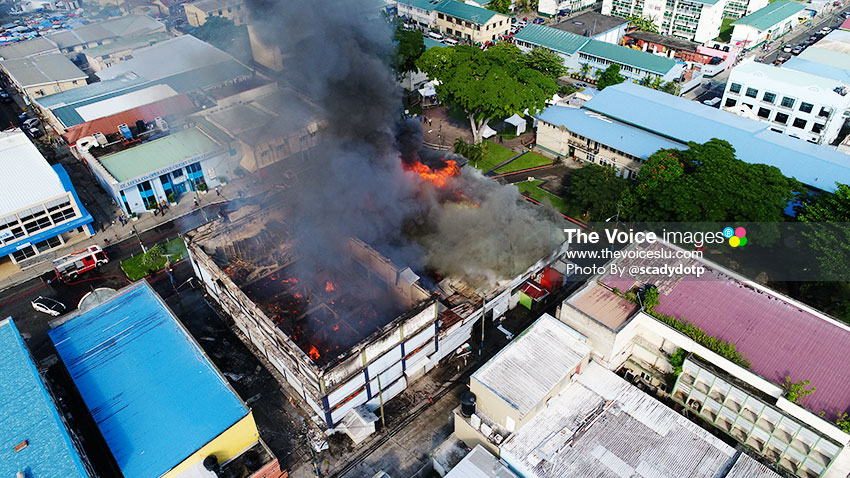 THE well-known Adjodha building which housed the popular Voyager business establishment on the corner of William Peter Boulevard, Laborie Street and West Hall Lane was destroyed by fire Thursday.

The fire, which started in the early afternoon, disrupted the usual activities that day in Castries. Workers in nearby businesses evacuated their buildings, vehicular traffic came to a halt while thousands of people were drawn to the blaze which grew in intensity by each passing minute.

Firefighters who were on the scene early could not contain the blaze quickly enough due to inadequate water pressure from a fire truck.

The smoke emanating from the blaze was sighted from miles away. It took more than two hours for six fire trucks and several fire-fighters from the Castries Fire Service, the Gros Islet Fire Station and the Babonneau Fire Station to bring the fire under control.

Gaiety’s Restaurant & Bar, Voyager Gifts and Souvenirs, Lush-Cious Lingerie and the Travel boutique, businesses housed in the building, were all consumed by the blaze.

A multitude of people quickly gathered on Constitution Park, Bridge Street, Peynier Street and on the Sir Derek Walcott Square to watch the iconic building burn as fire-fighters attempted to put out the flames. The multitude on Constitution Park was asked by police to withdraw onto Peynier Street when the fire intensified. The building’s glass show-windows shattered and the roof caved in as the fire spread throughout the interior.

Because of the nature of the materials contained in the building, the fire quickly spread throughout, according to a leading fire-fighter, 542 Stacy Joseph.

Employees from WASCO arrived at the scene of the fire to assist, as fire-fighters encountered difficulties with low water supply at the beginning of the ordeal.

“The water supply in the beginning was a bit low, but we have certainly managed and with the officials from WASCO we have now been given added supply from the hydrants which are nearby.” Joseph stated.

Joseph said it was difficult to deal with a blaze of that magnitude stating that the fire service has limited resources when it comes to man-power, however, “we have called in all the necessary fire stations; we even have some members of the Soufriere Fire Station here with us. It’s a very difficult fire to battle.”

To give a description of the burning buildings, she remarked, “This is a very catastrophic scene.”
The livelihoods of a number of employees and their families have been affected by this blaze.