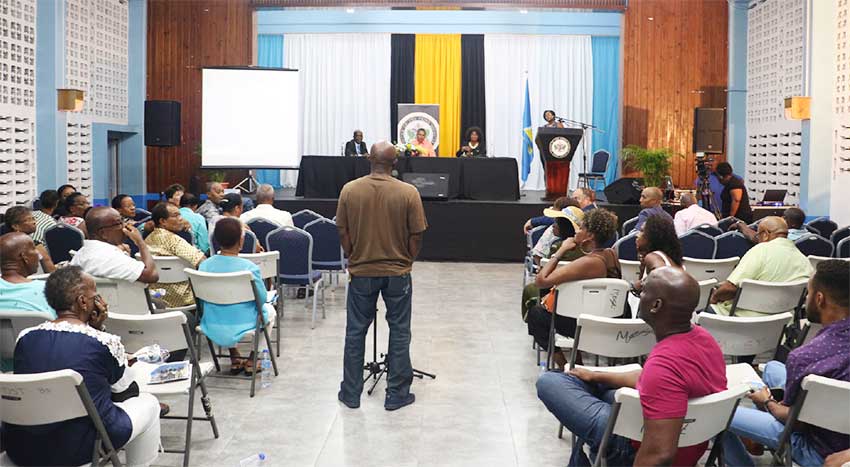 THE Government of Saint Lucia continues to reach out to Saint Lucians far and wide to share information on the plans to Build a New Saint Lucia.

This continued on Saturday 23rd November 2019 with a meeting by the Office of the Diaspora Affairs to welcome and inform the Returning/Returned Diaspora on the country’s development, investment and skill sharing opportunities. The meeting was held at the Castries City Hall and featured returned nationals and persons who are interested in returning to Saint Lucia as well as representatives from Saint Lucia Air and Seaports Authority (SLASPA), Invest Saint Lucia, Export Saint Lucia, Saint Lucia Social Development Fund (SSDF) and Saint Lucia Development Bank (SLDB).

Director of Implementation Nancy Charles chaired the proceedings and informed that the Governement had been reaching out to Saint Lucians all over the world with town halls recently held in London and New York. She noted that the Government recognizes the impact of the Diaspora goes beyond remittances.

Acting Prime Minister of Saint Lucia Guy Joseph delivered remarks on behalf of the Government giving an overview of plans for the country and an update on projects and programmes.

“I am here tonight because I think we understand where we need to go as a country and so we may gain further appreciation of where Saint Lucia is today,” said Acting Prime Minister Guy Joseph at the Saturday evening gathering.

The Acting Prime Minister went on to highlight the strides the Government is making to ensure Saint Lucia is the best country to live, work and invest. Special mention was made to the immediate economic decisions made in early 2016 such as the reduction in Value Added Tax and the amnesty on outstanding hospital bills. That and more, said the Acting PM, resulted in robust economic activity thus contributing to the lowering of the debt to GDP ratio.

The event was spearheaded by Ambassador for Diaspora Affairs, H.E. Dr Jocelyne Fletcher who explained that her office is always available to respond to concerns and share information with returning nationals. She thanked her entire team and Diaspora groups from the north and south of Saint Lucia as well as in the region.

Ambassador Diaspora Affairs, H.E. Dr Jocelyne Fletcher spoke to the responsibility of the Diaspora Unit as an agency for providing support, capturing data to influence policy and being the direct link to Saint Lucia for nationals overseas.

“The diaspora matters,” noted Dr Flecher. “They can change and shift the social fabric of this country and we need to embrace them and understand the contribution they are making.”