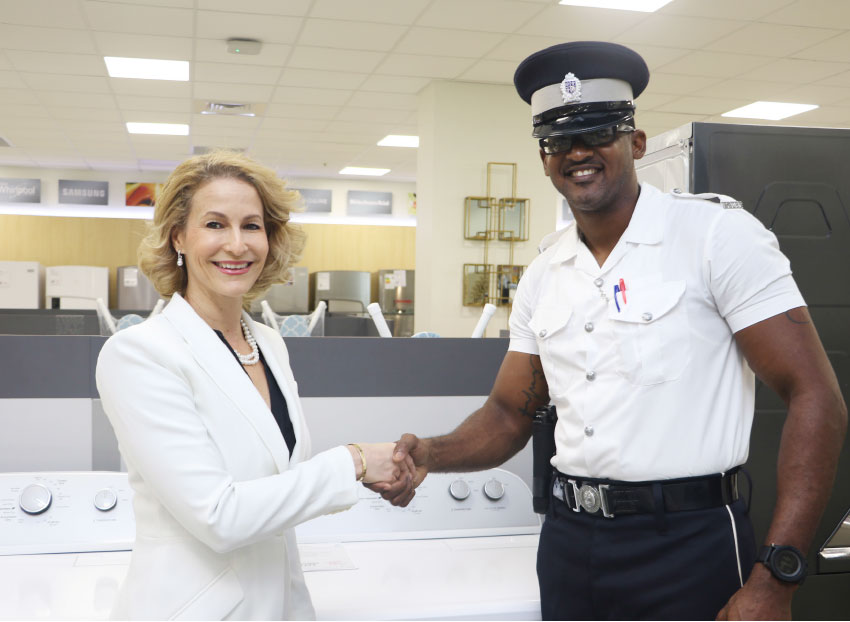 THE Make It Happen Foundation continues to try to make a difference in the lives and working conditions of police and fire officers island-wide. Founded by Raquel Du Boulay-Chastanet, wife of Prime Minister Allen Chastanet, since its inception, the foundation has been devoted to helping police officers and fire fighters by upgrading their work spaces, providing basic equipment needs and thereby making them more comfortable and improving morale.

In 2019 alone, the Foundation has been living up to its mission and vision with upgrades and contributions made at several police stations and institutions including schools and the Bordelais Correctional Facility. After two and a half years without hot water, the officers at the Marchand Police Station were thrilled last week to receive a Water Heating System so they no longer have to bathe in cold water. Inspector Foster Chicot says the station is truly grateful for this contribution as it will augur well for the wellbeing and overall morale of the station’s officers.

The Make it Happen Foundation has also given a facelift to the Rodney Bay Sub-Station by repainting it inside and out and building a new kitchen as well as extending the station facility to include a new recreational area where officers can sit together when not on active duty. Chesterfield Police Headquarters received an AC unit and a financial contribution of $6,000 was made to the Fire Service Benevolent Fund to benefit a family from Canaries who lost their home in a fire. Six washers and dryers have also been distributed to various police and fire stations all over the island.

With proceeds from its charitable events, Make it Happen was also able to provide $20,000 worth of recreational and sporting equipment for wards at the Bordelais Correctional Facility. This particular initiative was in response to a request from the mother of a young inmate who wanted assistance in order to try to foster a spirit of engagement and socialization, especially amongst the young offenders. The facility also received televisions, two ping pong tables, basketball hoops and balls, volleyball equipment including nets and balls, soccer goals and balls and a wide range of educational games, cards and dominoes.

In March to celebrate International Women’s Day, the Foundation hosted a sold out Ladies Tea Party called “Tea and Testimony” which raised $15,000 for the Women’s Support Centre, a safe house for victims of domestic violence. In May, Make it Happen was able to team up with the 1st Battalion Scots Guards from the British Naval Ship to give The R.C Boys Primary School a much needed makeover. A fresh coat of brightly coloured paint definitely brought joy to students and teachers alike.

As The Make It Happen Foundation gets set to host its highly anticipated annual charity ball which is not only a night of fun and fashion but one where retired police and fire officers are honoured for their service, the Foundation thanks all sponsors and well-wishers who partner with the charity on a regular basis and who have committed to the cause and the vision and who have made all the projects possible. In particular, Courts Unicomer, Digicel, St Lucia Distillers, Harris Paints, Brice and Company, Model Homes, Florida Caribbean Cruise Association, Harry Edwards Jewellers, Diamonds International, Sandals Resorts, Coconut Bay Resort, Jade Mountain, The Body Holiday, Coco Resorts, IGY Marina, Fond Doux Resort and M&C Home Depot.

For the first time ever, the Officers’ Ball will be partnering with Hot Couture. The Ball will be held on Saturday 7th December 2019 at the Grand Pavilion on The Ramp at Rodney Bay. The Gala Event and Fashion Show will highlight Saint Lucian and regional designers as the Hot Couture Capsule Collection will be unveiled. The male models will be well known business and community leaders as well as sports personalities. It will be a night of surprises, incredible fashion, great food and entertainment and a DJ playing into the wee hours. Tickets which went on sale three days ago are priced at $350 and are almost completely sold out.