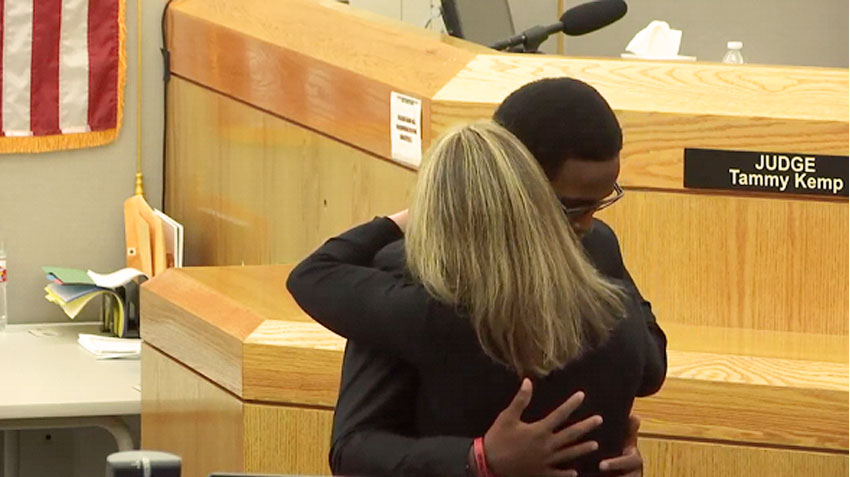 THE world’s most famous hug — between a mourning Saint Lucian brother and the American killer of his kin in a Texas courtroom – has made its way into The White House. Well, almost…

But the Brandt Hug went far and had been not only praised by advocates but recommended for adoption by powerful people across America and Saint Lucia as a means of early closure in such circumstances where families lose loved ones through such acts as police killings with racial ramifications.

Following the Brandt Hug there was a much unexpected but welcome decrease in the expectation that Black America would have exploded – and not only in Texas.

The sentencing of the killer cop to serve the shortest possible time in prison for a murder she pled guilty to, followed by a similar hug by the presiding judge who also gave her a bible, led to loud but limited condemnation.

But two other subsequent actions have ensured the Botham Jean murder, the Amber Guyger case, the Brandt and Judge’s hugs would not soon be wiped off the front pages in Texas: the assassination of Joshua Brown, a key witness in the Guyger trial who was also due to testify in a civil suit against her and another similar Botham-style killing by another Texas cop, this time a white male cop having shot dead a 28-year-old black woman dead in her apartment.

Three black men have been accused of shooting the Guyger trial witness who lived on the same floor and saw all that happened after she killed Jean in his own home. But the fact that he was killed in an ambush outside his apartment after having moved five kilometers away for fear of insecurity following signs of being targeted has only added to the racist conspiracy theory suspicions of most blacks.

The Botham Jean murder and Amber Guyger trial, The Brandt and Judge’s Hugs again all came into focus following the killing of Atatiana Jefferson by the white Texas cop at her own home while playing with an 8-year-old child.

Her family hired Lee Merritt, the same lawyer representing the Jean family, who immediately called for an investigation after having earlier sounded an alarm of possible conspiracy following the assassination of the key witness, who hadn’t been given witness protection.

But the family also sent out a clear message that ‘We don’t want no hugs!’ – All they want is ‘Justice’, they insist. The second white killer cop, unlike Guyger who was fired, was allowed to resign voluntarily and he refused to cooperate with the investigation and was only later detained.

The Brandt and Judge Hugs would also, in quick time, make the transatlantic crossing to the UK, where the wife of an American Ambassador was engaged in an accident in which a 19-year-old boy riding a bicycle (Harry Dunn) was killed.

Using her husband’s diplomatic immunity, the American lady quickly took a quiet flight back to the USA to escape legal prosecution, resulting in the UK government and the dead boy’s parents protesting and appealing for her return to face the legal process, but to no avail.

The grieving parents were eventually surprisingly invited to The White House for a meeting with President Donald Trump, to whom they and their lawyer have appealed to intervene and send the diplomat’s wife back.

As it turned out, the parents and their lawyers would find themselves talking to the President, who informed them that the diplomat’s wife was in fact in the building and wanted to meet the deceased boy’s parents.

Every effort had been made to separate the lawyer from the dead boy’s parents at the White House, but he luckily insisted on being at their side all the way, including during their talk with President Trump, when he stepped in to tell the president he would not allow his mourning and grieving clients to meet the diplomat’s wife, as ‘That will be very inappropriate.’

The dead boy’s outspoken mother also took it to the US President, asking him, ‘as a father of a son’ to put himself in their place and walk a mile in their shoes. That done, the President reportedly said he was convinced he’d probably have to take a second look at the matter.

But it was after the refusal to meet the diplomat’s wife that the Gunns and their lawyer realized why the grieving parents had been invited to Washington: After their meeting with the President ended, the doors opened and a flood of reporters and TV cameras entered the room, having been earlier alerted of the possibility of a big scoop.

The plot was to have the grieving parents meet and hug the person responsible for their son’s death, a-la-Brandt and with President Trump in the picture, to intentionally create and nurse an emotional forgiving aspect into the whole picture ahead of any legal proceedings. Like the Jean case too, such a hug would’ve had an expected bearing on continuing efforts by the parents of the deceased and the UK government to have the diplomat’s wife stripped of her diplomatic immunity and extradited to the UK to face the normal related legal proceedings.

As it turned out, like in the case of the young woman killed by the Texas cop, the UK family was not interested in any hugs, only likewise insistent on pursuing justice for the deceased without external interventions and political plots of the type that have attended all these cases thus far.