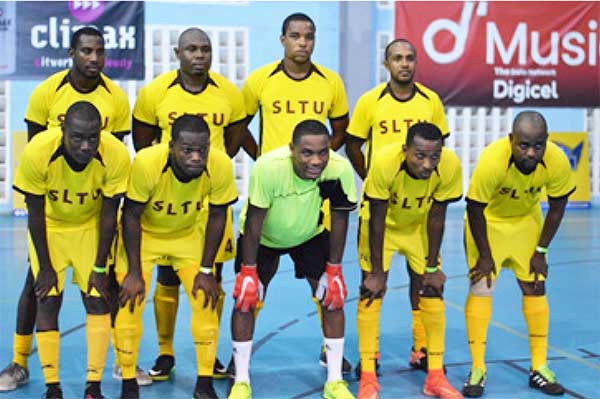 THE friendly rivalry on centre court, loud shouts and comradery amongst the various business establishments continues this evening in the 2019 Corporate Warfare Futsal competition in collaboration with TimeOut Entertainment at the Beausejour Indoor Practice Facility (BIPF) with four exciting matches.

A record 114 goals have been scored with telecommunications company Digicel leading the charge with 11, closely followed by KFC with 10, and Elite out of Micoud and Infrastructure with 8 each, WLBL/ DBC, Velox, Statesman 758 and Flow each have 6.

Goalkeepers have been kept busy between the uprights as twelve hat tricks have been scored by twelve individual players.

The leading goal scorers are Eden Charles of Infrastructure and Bobby Constantine with four goals each, while there are seven players with three goals each.

Matches continue on Wednesday 2nd October, from 6.30 p.m. Flow will fancy their chances when they meet Volex; Statesman 758 will play WASCO at 7.30 p.m. and Sandals Grande goes up against PCD at 8.30 p.m.

“This weekend we move into the second round of the Knock Out tournament; to date the tournament has been exciting. The patrons have been entertained with a high level of skills and in so doing it has been an electrifying atmosphere created by dynamic fans and hosts,” said Lionel John, one of the tournament’s organizers, speaking to the VOICE about this weekend’s matches.

He continued, “This round is going to be even more exhiliterating as every team left in the Knock Out seems to have a certain level of parity in terms of skill and passion to win. It’s anyone’s game at this time. It’s Corporate Warfare, the best meeting ever.”