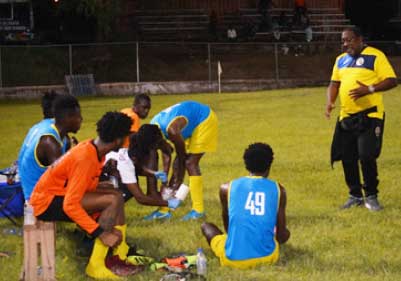 AN 18- man senior football team under the Saint Lucia Football Association (SLFA) Inc. banner is currently in El Salvador where they will take on the host nation El Salvador in a Group B encounter in the CONCACAF Nations League Championship today (Saturday 7th September).

Meanwhile, following the national team final friendly against Lancers FC at the Gros Islet Playing Field this past weekend, which the national team won 5-0, coach Jamal Shabazz said, “We were never concerned about the result of the game, we were more focused on trying to play in the tactical shape defensively, trying to stay in our half and defend for long periods, and come out quickly; Lancers FC was unable to keep the ball long enough to put us under that type of pressure.”

He continued, “It’s a programme that we are starting over and until we get the funding that allows us to play high level teams as warm up matches; we have make do with the teams locally. Our aim was achieved, we try to stay organized, we try to stay disciplined and compact while defending.”

In terms of the two overseas based players who played the friendly on the night, Coach Shabazz said, “So far, the two players Bradley Nestor and Chaim Roserie have been very impressive. Tactically, they both have good skill, good touch, and tremendous talent. I was more impressed with their tactical discipline and their willingness to carry out the task we put on them, which makes them stand out as opposed to the Saint Lucian born players their age. They come out from an academy system where they learn to listen and they show tremendous respect for authority and tactical discipline. I am very impressed.”

Sharing his thoughts about playing El Salvador at home, Coach Shabazz stated, “It’s going to be a difficult one for us. We will be happy if we can come away with a point; El Salvador is a superior opponent in CONCACAF to us. It’s an opportunity for our players and staff to step up and accept the challenge and try to see if we can play the kind of tactical game that will allow us to get a result. I am very excited. I went to El Salvador in 2012 with the Guyana national team and we were able to steal a point from them; it is not an impossible task, the players have a good mindset towards it and we will go with a big heart.”