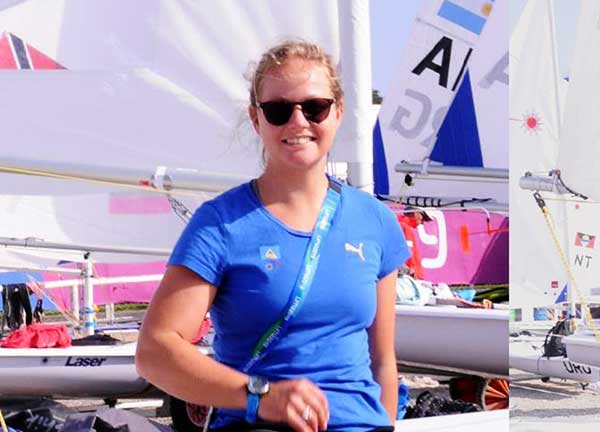 SAINT LUCIA’S sailors Stephanie Devaux Lovell and Luc Chevrier were expected to compete on Saturday at the Pan American Games taking place in Lima, Peru. However, conditions were not favorable which led to the event being postponed.

Sunday was no better, and the earliest day for the sailing competition getting underway could have been yesterday or today.

Both Devaux Lovell and Chevrier are stationed at Paracas some 259 km away from the Games Village. They are eager to compete in their respective events.

Chevrier who did most of his training in France, is familiar with the waters here, having competed earlier in the year in a qualifier for the present Pan American Games.

At that time he said: “It was very windy with flat water and the wind does not change in angles, due to the thermal breeze which is created because we are basically in a desert, so it gets hot and then the wind builds up. It is always constant leading to very windy conditions.”

When asked about the conditions on Saturday he replied: “It was very cold and humid, so the wind was not able to build up. This is why we are still waiting for the signal to go on the water.”

I also inquired if being in limbo as to whether or not sailing would take place Saturday, affected the mindset of athletes?

He told me: “Everyone is prepared mentally to go on the water and when there is a postponement… you know we don’t like to wait because we want to go on the water, get it over with, go home and prepare for the next day. But I mean it is all part of the game that’s sailing. You can’t control the conditions.”

Lovell is among the ladies in waiting for her event to get underway. She is based in Toronto, Canada, attends university and also works at the yacht club there. She is more than ready to compete following extensive training. Her coach Robert Hemming accompanied her to the Games.

“My preparation for the Pan American Games went well,” said Lovell. “I have been working a lot on my fitness and sailing technique. I have really good support. My coach is in Toronto so that has been really helpful. I attended the World Championships just before I came here so that was really a great experience. I really like sailing among the best in the world, it is such a big and competitive sport and it has really prepared me for the Pan American Games.”

Like Chevrier, Lovell is somewhat familiar with the course. She competed there a few years ago at a qualifier for the previous Pan American Games.

“This being my second time here, I hope to use the knowledge I gained to help me this time around,” she remarked.

Commenting on Saturday’s conditions which led to sailing being postponed she was ready no matter what.

“The weather is the weather”, she said. “You can only do with what you have. I am planning to make the most of whatever is presented when it comes to sailing conditions.”

Having said that, without a doubt if Lovell had her way she would definitely compete on Saturday.

Here’s hoping both sailors get to compete sooner than later, doing what they do best and along the way make Saint Lucia proud.

Zephir competes tomorrow (Wednesday 7th) which is the same day track and field gets underway.