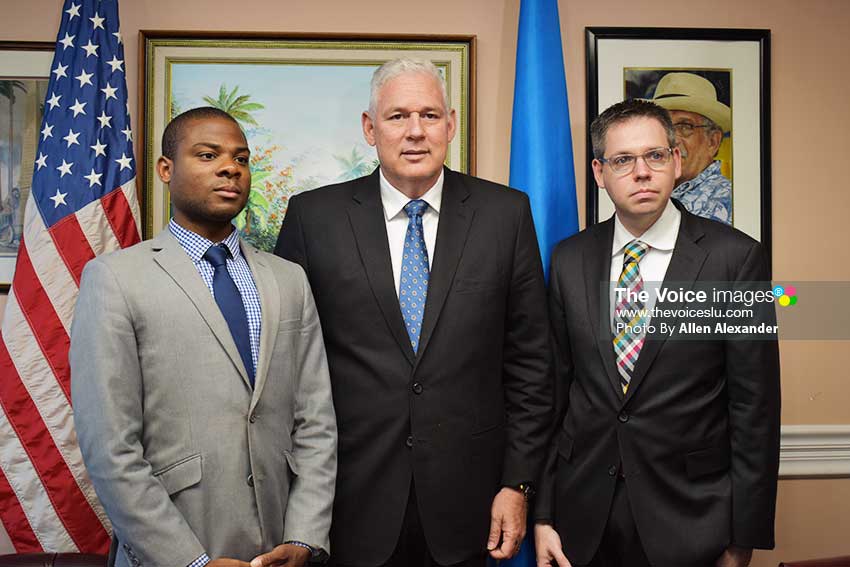 PRIME Minister Allen Chastanet on Tuesday August 13th met with a delegation from the U.S. House of Representatives for the purpose of discussing matters of mutual concern, the Caribbean Basin Initiative and bilateral relations between the two nations. The delegation comprised of Eric Jacobstein, Senior Policy Advisor on the House Committee on Foreign Affairs and Evan Bursey, House Foreign Affairs Staff Associate. The delegation represented the Congressman Eliot Engel, Chairman of the Foreign Affairs Committee. At the end of the meeting Chastanet stated, “The Government of Saint Lucia has had and continues to have a very strong relationship with the US Government.”

Chastanet announced that a number of issues including Venezuela’s political situation, Haiti and the regional economy were discussed at the meeting. As far as the Venezuelan political situation goes, the Prime Minister announced that he understood as of August 12th that the Government of Venezuela had called early elections for the Assembly. Chastanet said that the assembly was perceived by many as the “last duly elected entity in Venezuela” and that the call for early elections of the assembly was a matter of concern to both CARICOM and the United States.

The Prime Minister affirmed that Saint Lucia continues to hold line with CARICOM on the issue of Venezuela. He stated, “We are a member of the Lima Group. We have fallen short of recognising Guaido as the official leader but we have been on record to say that we believe the Maduro regime is illegitimate; that the elections which took place don’t represent what was a democratic process and that the opposition continues to be oppressed.” In addition to this Chastanet added, “And therefore we continue to call on the Maduro Regime to have fresh elections.”

In regards to immigration, Chastanet affirmed that it was in the interest of Congressman Eliot Engel to see a greater presence of US Embassies in the Caribbean Region. In reference to this interest Chastanet added, “He would like to see that at least the application of visas can be done from Saint Lucia and doesn’t require people to travel to Barbados to be able to get processed.” On that note Chastanet announced that Saint Lucia will be working with some other countries in order to facilitate this process for citizens of Saint Lucia. Chastanet also said that the online renewal of U.S visas was a step in the right direction.

The prime minister also took the opportunity to advise Saint Lucian Green-card holders who are living in the United States, to proceed into getting their U.S citizenship. The statement was made in response to how Caribbean nationals in the U.S might be impacted by the current raids being executed by U.S Immigration and Customs Enforcement (ICE). Chastanet added, “If they’re citizens and they get into any kind of difficulty they cannot be sent back home. But if you’re going to stay illegally or as a resident then you’re going to be vulnerable.” Chastanet went on to say that Saint Lucians needed to adjust to the shift in policy which is taking place in the United States, since it is a matter beyond his control.

He gave the assurance that the Saint Lucia Embassy in New York is continuing to work with Saint Lucians living in the USA. Chastanet further added, “We also continue to work with the U.S in terms of trying to get some resources made available to us to help people who are being sent back here; who have not been here or don’t have any family members here. So it’s critical not to just ignore that but to help those people coming back to become productive citizens in Saint Lucia.”