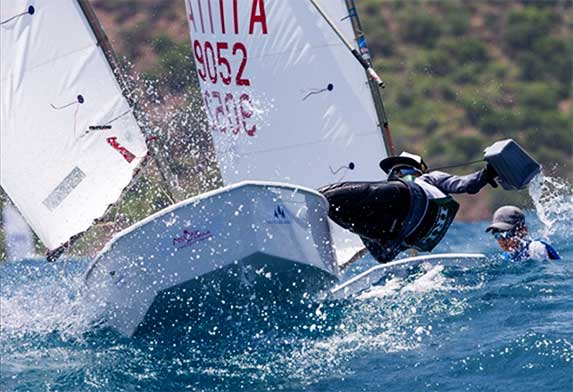 Conditions were tough, but spirits remained high during the 2019 Optimist World Championship for the 257 participating sailors representing 65 nations as they battled strong gusts and punishing waves brought about by Antigua’s famous trade winds.

The world championship attracted the top five optimist sailors from their respective nationalities.

The three have all been trained, guided, and coached through the Saint Lucia Yacht Club’s Youth Sailing programme.

The team was led by coach, Fredric Sweeney; who is the coach and mentor for the Youth Sailing programme at the Saint Lucia Yacht Club (SLYC).

SLYC Commodore Peter William Lang was enthusiastic about the team attending the world championships. Encouraged by their the recent achievements of the Youth Sailing programme  which demonstrates that with hard work progress can be achieved.

Coach, Fredric Sweeney, said, “The conditions were challenging. The race course is set up in the open ocean on the south coast of Antigua. There were big waves, lots of ocean breeze, and sargassum to challenge the sailors.”

He continued, “Although the Saint Lucian sailors may not have placed in the top 20, everyone is proud of their performance and tenacity.  They gained powerful experience by learning from others such as a young man from South Africa who provided them pointers throughout the qualifiers and races”.

SLYC has offered a youth sailing programme allowing local individuals to engage in the sport of sailing.

Anyone interested in learning more about the Youth Sailing programme can contact Fredric Sweeney at 489-8914 or stop by the SLYC located in Rodney Bay for further information.

“We have held the North American championships in Antigua before so we knew the team was very capable but there are many more boats this time which makes the logistics much more complex. They have done a fantastic job,” he said.