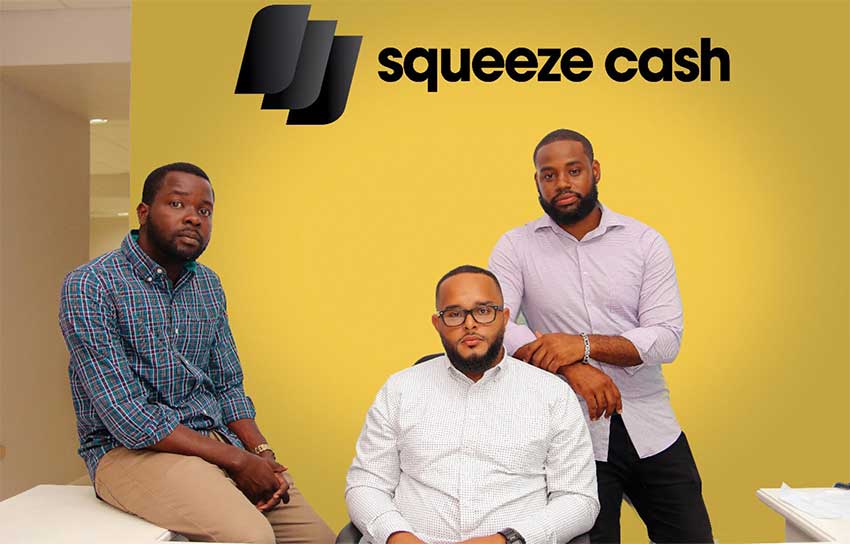 St Lucians will be able to use their mobile phones and tablets to send and receive money and make and receive payments as of Saturday, June 1 2019. This comes as Squeeze Cash Limited; a Saint Lucian startup rolls out the pilot phase of its Mobile payment solution. The app was created by two young developers; Ashley Mc Lean, a UX/UI Designer and Sunal Fontinelle, a self-taught developer. Squeeze Cash allows merchants and consumers to transact payments, merchants to pay other merchants and makes it possible for individuals to send and receive money from each other using a mobile device.

“After nine months of spending our evenings, nights and weekends building this app, we’re thrilled to finally share our product with the public and to offer St Lucians the opportunity to participate in this beta launch of Squeeze Cash. The feedback from the pilot phase will play a part in helping us ready the app for its full public launch and eventual regional expansion, allowing Peer to Peer (P2P), Business to Customer (B2C) and Business to Business (B2B) payment transactions,” said Squeeze co-founder and CEO Ashley Mc Lean.

“We expect merchants to begin enabling Squeeze Cash as a payment option. Early adopters who join us now will be among the first ever to shop and pay with Squeeze Cash as we progressively roll out,” he added in a release from the company.

Co-founder and Chief Technology Officer, Sunal Fontinelle states that “throughout the beta, participants will get to experience the functionality of Squeeze Cash. Beta users’ feedback provided via email to support@squeeze.cash and in-app chat will help optimize operations for a smooth public launch in the coming weeks.”

Kenrick Quashie, Chief Operations Officer of Squeeze Cash expressed his confidence in the app by declaring that “it is ready for the market.” He indicated that the company is prepared to start small and scale up quickly.

During the pilot stage which will last for a month, individual users will have the following restrictions:

While Squeeze Cash payments can only be done in St Lucia at this time, it allows users outside of St Lucia to send money to users in St Lucia as a money transfer option. Users may use the money on their wallet to conduct transactions or they may withdraw from their bank account if they so desire.

Squeeze Cash boasts of being a very safe app as its security is managed by Google owned Database. The app is user friendly and palatable to the eyes. Any merchant regardless of the size of the company can sign up and use the app.

Merchants and consumers can now go to the App Store and Google Play Store to download the app on their smart phone. They may also visit the Squeeze Cash website to learn more about Squeeze and its features and limitations during the pilot period.

The company is also expected to begin accelerating its drive to sign up new merchants and consumers.