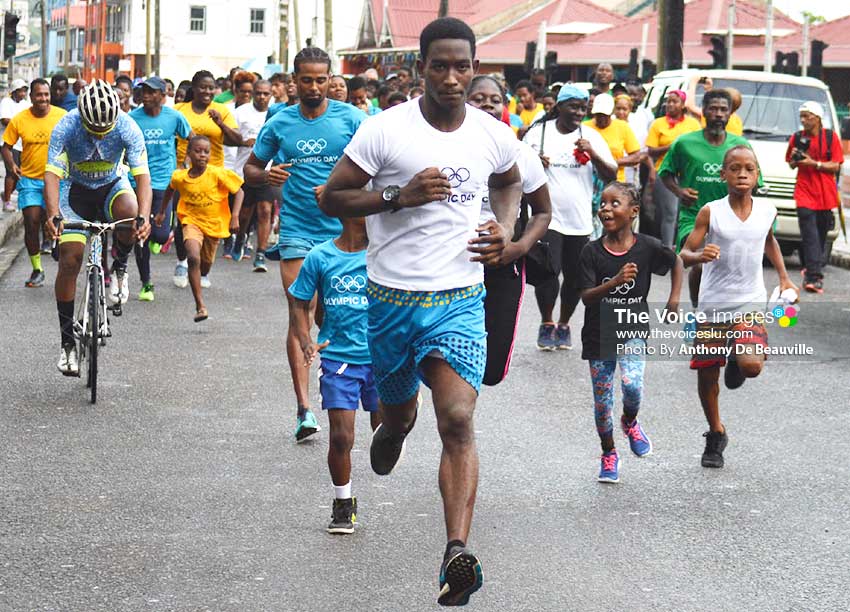 Persistent heavy rain this past Sunday, 23rd June 2019, caused havoc at the Olympic Day activities organized by the Saint Lucia Olympic Committee Inc., but not before over 325 runners representing a number of national sporting federations faced the starter outside the Castries Market on Jeremie Street for the annual 5 Kilometer Run which started at 7.15 a.m.

Led by outriders of the Royal Saint Lucia Police Force (RSLPF), the runners went through the streets of Castries, and then onto the John Compton Highway, Nelson Mandela Drive, up to the Mexican Embassy in Vigie, and from there, turned around to finish outside the Saint Lucia Olympic Inc. Headquarters adjacent to Massy Supermarket in La Clery.

“How did it all happen for a contingent from Laborie to be here?” Emmanuel asked. “Once the affiliates decided that they were coming from as far as Laborie and they raised the issue of transportation, we facilitated them by paying their transportation cost to Castries to participate in the event and we are more than happy to have them.”

He added, “The weather did play its part, but we are thankful for those who came out to give support to the event, especially the early morning run.”

A little research into the event finds that in 1987, in an effort to encourage all National Olympic Committee (NOC) members to commemorate and celebrate Olympic Day., the IOC Sport for All Commission launched the Olympic Day Run concept with the objective of promoting the practice of participation in sports by men, women and children from all corners of the world and all walks of life, regardless of athletic ability. The first Olympic Day Run was held in 1987, over a distance of 10 kilometers.