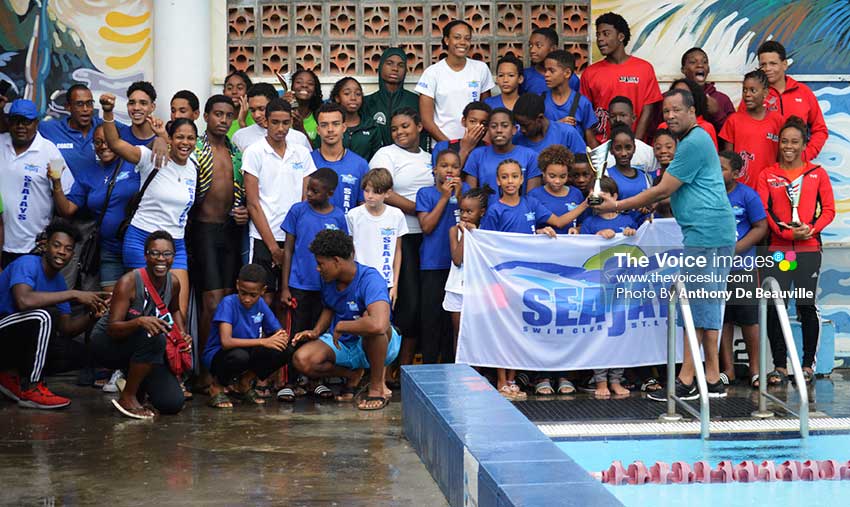 The atmosphere at the Rodney Heights Aquatic Centre was upbeat despite persistent rain on the final day of competition (Sunday 23rd June 2019) when Seajays Swim Club (SJSC) hosted the 5th Annual Karen Beaubrun Swim Meet with support from a number of corporate sponsors.

The meet was organized to honour Coach Karen Beaubrun for her commitment to swimming and as a founding member of the club. Not only was she a Seajays coach; Karen taught values such as fair play, respect, dedication to team and sport, honesty and leadership, values which are still being taught to swimmers to this day.

Like previous years, one swimmer from each club was awarded the Karen Beaubrun Award for upholding the values and standard and showcasing dedication to the sport of swimming and to their respective club. The recipients were Hannah Christopher – RR Aquatics; Gelanie Augier – Lightning Aquatics; Allandre Cross – Sharks Swim Club; Omar Alexander – Seajays Swim Club and Rashawn Francis – Southern Flying Fish.

Meanwhile, Seajays took the time out to thank Dr. Diane Worrell and the Rodney Heights Aquatic Centre for their dedication to this meet and to swimming on a whole.  Special mention was made of Dr. Beaubrun and family for their continued support of the Seajays Legends Swim Club.