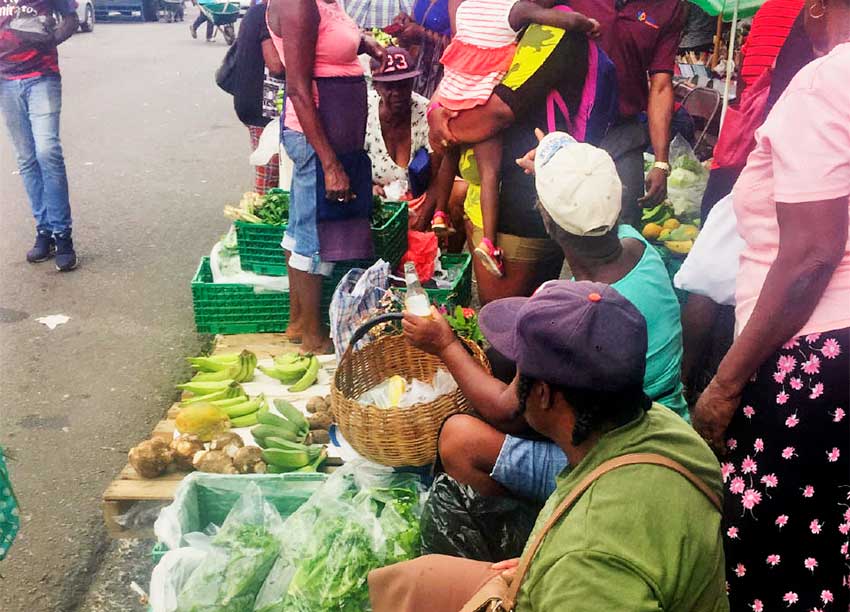 Provisions vendors were this week forbidden to vend in front of the Craft Market on Jeremie Street, Castries. The provisions vendors in that area, notably all female, were furious for being evicted without notice on May 29th. This led to a great commotion between provisions vendors and City Police. The commotion comprised of vendors’ protests and seizure of trays by City Police. Food items were consequently thrown to the ground as a result. Carlin Felix was one of the vendors who passionately protested against the eviction. She stood and perched upon her tray, refusing to be moved.

Peterson Francis, Mayor of Castries, in answer to the protest, announced that vending of provisions on the Jeremie Street sidewalk is now “a thing of the past.” He said that action will be taken if vendors do not adhere to the change. Peter Issac, President of the Saint Lucia Craft and Dry Goods Vendors Association, has accused the Mayor of causing anxiety and problems for the provision vendors.

At a press conference which was held on Thursday May 30th, Philip J Pierre, Leader of the Opposition and Parliamentary Representative for Castries East, and Ernest Hilaire, Opposition Parliamentarian and Representative for Castries South, expressed empathy for the Jeremie Street provision vendors. Pierre questioned how the members of the present administration would feel to see the child of a single mother, witness their mother’s provisions being thrown away.

Pierre remarked, “You have to talk and communicate with people. Using the draconian method of throwing the people’s food… that is how they earn their living. Do you think that is humane? Do you think that is a Government that cares about single mothers?” Pierre stressed that change management is a process which takes time to understand, and that the authorities should have taken a better approach which involved adequate dialogue with the vendors. Pierre continued, “Do you think they (the Government) would treat a big business in town the same way? Do you think they would treat a foreign investor the same way? But the innocent single mother… who is selling her produce; you will throw it away and leave her to cry. It is distasteful and it shows where the Government’s moral compass is. It shows how the Government relates to people who are not in a position to retaliate in an effective way.”

Hilaire defined the Mayor’s behaviour to be akin to that of ‘A bull in a China shop’. Hilaire said that there was “no humanity, no understanding and no sense of decency in the way that the Mayor does things.” He also stated that he was not against the improvement project of the Castries Market, but insisted that there was supposed to have been a preliminary process relating to consultations of the people involved. Hilaire remarked, “You cannot in such a haste to get a project started, decide to do it a particular way; and no matter who is opposed to it, think that they will feel the wrath of the City Police.”

Hilaire, taking the side of the Jeremie Street provisions vendors, wished to know in precisely what manner the vendors were affecting the construction of the Castries Market. Hilaire proceeded further, “And again, what is the motive –what is the ultimate rush to get the project going? –And in the process people have genuine concerns and the Mayor totally dismisses them, and believes that he can use the City Police to enforce his way. That cannot be right.”

Hilaire said that his representative on the council was not included in any discussions to decide the best way to handle the vendors in preparation for the Market Redevelopment Project.

Upon reflection of the May 29th Jeremie Street commotion, which involved the provisions vendors, Hilaire remarked, “It was so heart-breaking to see mothers who are coming to sell some produce at night to send their children to school the next day, being treated that way. It is totally unacceptable and inhumane. I think the Mayor should step back, engage the vendors and collectively commence the best way to move forward with this project. He has to show that level of understanding and decency in how he treats people.”

Meanwhile on May 30, 2019 the Office of the Mayor and Castries Constituency Council (CCC), released a press statement with the headline, ‘Road Side Vendors Must Accept Change.’ The release went on to speak of the actions of “a few “Sidewalk City Vendors” who continue to defy relocation plans for the Castries Market Redevelopment Programme.”

Within the statement, the CCC informed the general public that ‘although these individuals are not full-time registered vendors, every effort has been made by the Office of the Mayor to provide them stipends and relocation support.’

The CCC statement noted that the vendors had rejected stipends. The statement ended with Mayor Peterson Francis encouraging vendors to “rise to the occasion and welcome the change which will ultimately improve their business and standard of living.”