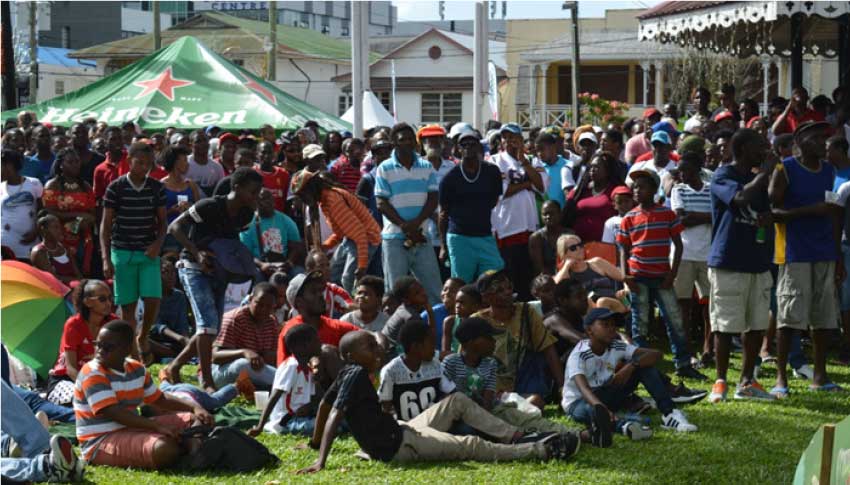 Football fans in Saint Lucia who normally take in the showpiece at the Derek Walcott Square in Castries to view the final of the UEFA Champions League will be heading to the south of the island this time around.

The Big Screen and party type atmosphere which has in the past unfolded in Castries, will take place at the Recreational/ Friendship Park in Vieux Fort this year. The event will be held on Saturday 1st June.

This time around, it’s an all-England affair when Tottenham and Liverpool (England) play each other in the final. Last year, despite overcast skies along with a few passing showers hundreds of fans turned out to watch the match between Real Madrid and Atletico Madrid.

For some local football fans their favourite team has been knocked out of the Champions and Europa Leagues; but the reality is, this year, it’s going to be an all-England affair with arch rivals Chelsea and Arsenal progressing to the UEFA Europa League final and Tottenham and Liverpool to face each other in the UEFA Champions League finals. It gives the 1966 FIFA World Cup Champions England a clean sweep of this season’s European finalists.

This has never happened in football history before.

No country has ever provided all major European finalists in for a single season. The closest, eliminating the UEFA Cup Winners’ Cup, is three out of four. This has happened six times, most recently in 2016.

Have a look at some of the results – In 1980 Germany – Nottingham Forest 1-0 Hamburg, Eintracht 3-3 aggregate Mönchengladbach (Eintracht won on away goals).

Italy did provide four finalists in 1990, back when there were three titles up for grabs including the Cup Winners’ Cup, which ran from 1960 to 1999. All three trophies ended up in Italy.

This season will be the seventh UEFA Champions League final between domestic rivals in 20 seasons.

The 2019 final in Baku is the first all-English decider since the competition’s very first season in 1971- 1972, when Tottenham got the better of Wolves. It is the tenth one-nation final in all.

Two winners in one season

Both trophies will head to England and it is going to be the 12th time one country has won both competitions, and the fifth time it has happened in six seasons.