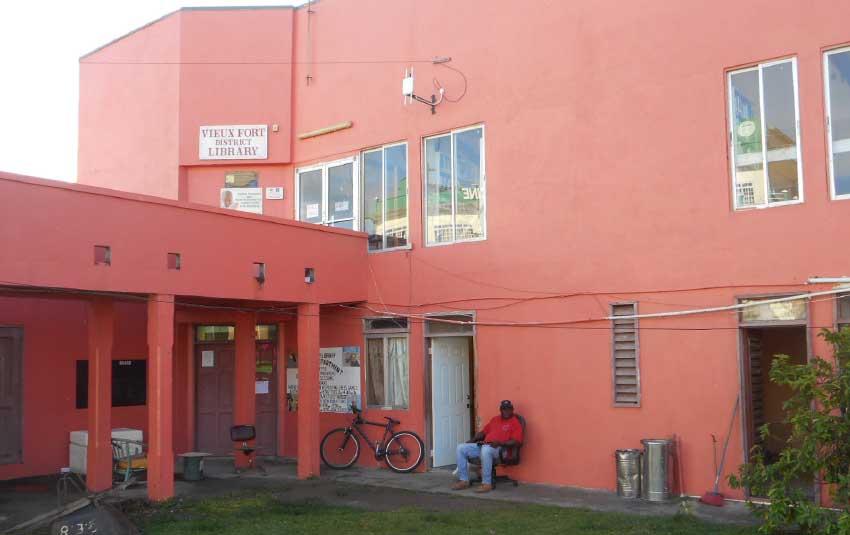 The Vieux-Fort Public Library is riddled with a multitude of problems which has resulted in it’s adult’s section being closed for over six months. At a fleeting glance, one would get the impression that the library is in good condition, but with just a peek inside the adult’s section it tells a different story.

Mould infestation, cracked walls, poor ventilation, a leaky roof and electrical issues are some of the problems it is plagued with. Whenever it rains heavily the section is transformed into a shallow swimming pool.

The labour department had demanded its closure last year after inspecting it thoroughly.

In a brief interview with this reporter last year, Stephen Griffith of the Labour Department described the situation as very serious and emphasized that it requires urgent attention.

However, the children’s section remains open, while the adult’s section which is located in the upper floor of the building remains closed with no signs of it being re-opened soon.

And since its closure last year, nothing has been done to address the problem.

Its condition had resulted in the librarians and patrons experiencing nausea and itching.

As a result of the situation, adults are forced to use the children’s section under cramped conditions.

The situation has left residents, especially students, wondering whether the government has any regards for residents of Vieux-Fort.

With the closure of the ICT centre in Vieux-Fort last week which this reporter understands is due to issues there, residents, especially young people, are even more concerned.

Kurshly Joseph, who uses the library regularly said: “The situation is very frustrating. It appears like no one cares about us….”

Robbie Williams, another resident who also uses the library regularly, described the situation as terrible and one that needs immediate attention. He said the tardiness in dealing with the problem on the part of government is affecting the entire community.

“There are so many students who use the library, but yet the government does not see the need to address the problem with haste,” he lamented.

In an interview with this reporter last year, the director of Library Services, Cynthia Mc Farlane, said the relevant authorities are aware of the situation, adding that she has no idea when the problem will be addressed.

Attempts to reach her this week for an update on the situation were unsuccessful.

Last year, another building was identified to house the library but no attempt has been made to relocate it.