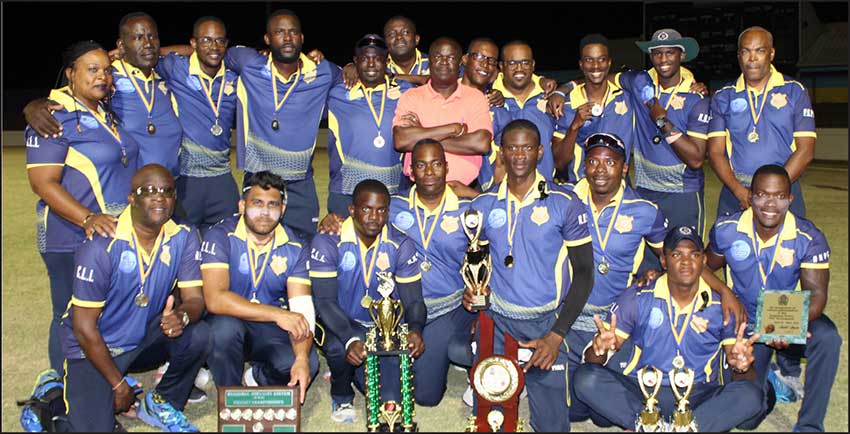 Barbados emerged champions of the 2019 Regional Police T20 Cricket Tournament with an emphatic 96 runs win over Grenada at the Daren Sammy Cricket Ground on Sunday evening.

Barbados was asked to bat first after losing the toss and was quickly in trouble losing Sanaj Lewis LBW to Alvin Thomas for 0 with the score on 12; hard-hitting opening batsman Jamar Yearwood did not waste any time at the crease scoring 31 in a 33 runs second wicket partnership with Roger Williams. He was out caught by Andre Fletcher off the bowling of Laurie Williams with the score on 45. His score included four 4s and two towering sixes.

Roger Williams was joined by captain Dario Sargeant and the two added 43 runs before Williams was brilliantly stumped by Lindon Lawrence for 23 with the score on 88 for 3. It quickly became 88 for 4 as Sargeant, who was joined by Stefan Gooding, was next out LBW to Andre Fletcher for a well-played 26.

Standing well over six feet tall, Larry Babb joined Stefan Gooding as the two batsmen looked to repair the early damage done by the Grenadian bowlers adding 53 runs for the fifth-wicket.  Babb was eventually out trying to hit Fletcher for a maximum – he was bowled off the inside edge for 33 with the score on 141.

It soon became 141 for 6; Ravendra Persaud LBW to Fletcher 0. For the next delivery, Darien Seale went via the LBW route off the bowling of Fletcher for 0, 144 for 7 giving Andre Fletcher a hat-trick.

Rasheed Padmore was run out by Kenroy Peters for 4 and so to was Stefan Gooding the last man out, run out by Josh Noel for 34 with Chad Linton not out 4.

Requiring 169 for victory, Grenada was bowled out for 72 in 12 overs with Andre Fletcher 20, Rondel Baptiste 11 and Leon Chichester 11 the only batsmen to reach double figures.

The Grenadians could not ask for a worst start losing opening batsman Lindon Lawrence for 4 with the score on 4 and No. 3 Ronald Cato 0, 4 for 2. Both batsmen fell to Larry Babb in the first over. From here on it was downhill for the Grenadians.

At one time the Bajans looked pretty disappointed on the pitch when Fletcher was dropped by Chad Linton at deep midwicket with the score on 18 for 2. Linton made amends not too long after when he took a superb diving catch at deep square leg to dismiss the hard hitting opening batsman for 20 off the bowling of Darien Seale to start an early crop-over celebration.