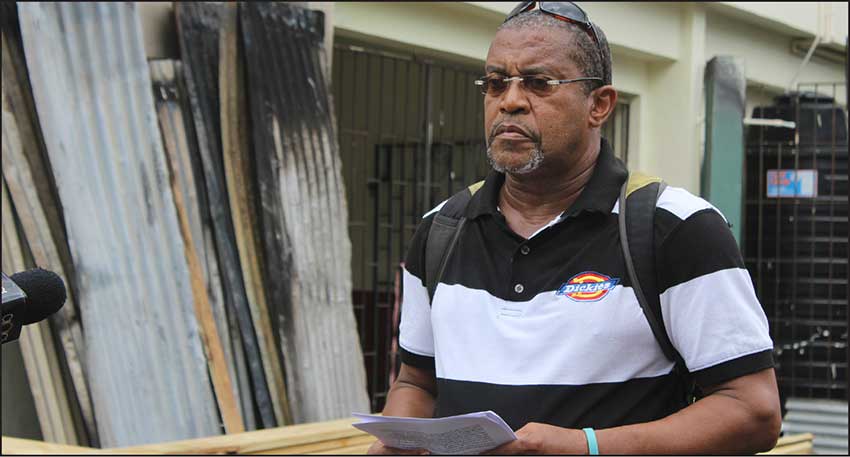 One week after fire destroyed three homes in Wilton’s Yard, Peter Lansiquot, an economist and former diplomat who once lived close to the area as a young man, has proposed a way whereby the people who were displaced by the fire can get the finances necessary to rebuild.

But in presenting his proposal, the economist took a swipe at the present government for its reception of a ‘Distress Fund’ that was established by the former government to assist persons like those who last week found themselves with no material possessions after the blaze that gutted their homes.

He said the government’s abandonment of the Distress Fund when it came into power in 2016 is causing more distress for poor people who find themselves in difficult predicaments as a result of losing their homes through fire.

Peter Lansiquot is proposing the establishment of a People’s Distress Fund (PDF). He is calling on 50,000 Saint Lucians in the diaspora and 50,000 here in Saint Lucia to each donate one dollar to the Fund. If all goes according to plan, the PDF could net over $100,000 within a month for fire victims and victims of other disasters.

“This mechanism will allow Saint Lucians in such need to receive assistance without having to beg and without feeling like beggars,” Lansiquot said. “Saint Lucians will not have to go begging any government, no matter which political party is in power, when they are legitimately in need of assistance after fires and related disasters.”

Lansiquot said he will start the Fund with $5,000 of his own money. He also made an appeal to young people, of any age, to donate one dollar each to the Fund.

Lansiquot’s intends to establish a five member Board of Directors for the Fund comprising one resident from Wilton’s Yard and another from nearby Rose Hill. Both areas have recently experienced fires that put several people in distress. These events are what spurred the idea of a Distress Fund.

“I will mobilize transportation across the length and breadth of Saint Lucia, with one or two helpers who have the time, to collect one dollar from 50,000 Saint Lucians, especially young people. We will be asking each contributor to kindly provide his or her name, to be recorded by each dollar. Anyone who wishes to contribute his or her dollar electronically, should also kindly agree to the recording of their name,” Lansiquot said.

Lansiquot promised to conduct the research and do the walking necessary to finalize all the legal and technical requirements for the proper institutionalization of the Fund.