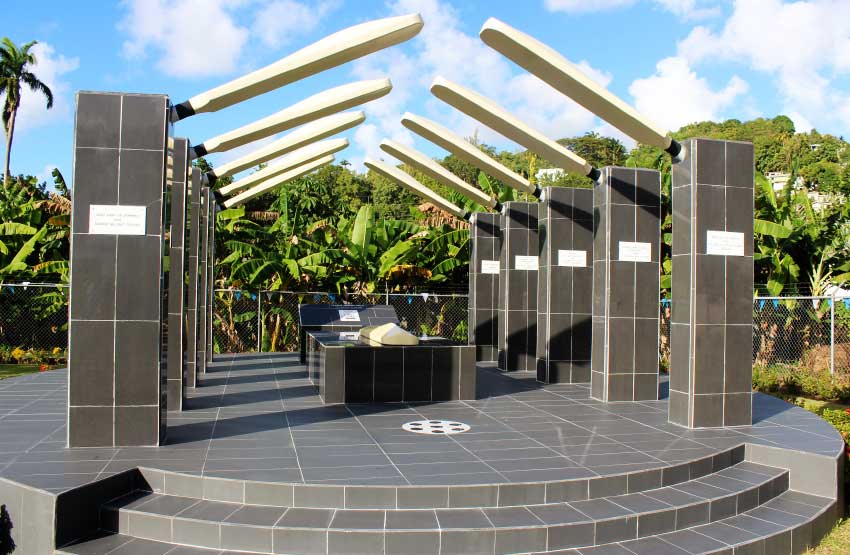 FRANCIS “Mindoo” Phillip was first immortalized by the re-naming of Victoria Park into the Mindoo Phillip Park in 1979, now his tomb, located inside the park, was transformed into a spectacular monument, the dedication of which took place last Saturday.

The construction and completion of the monument was the culmination of months of brainstorming by a devoted team of Saint Lucians determined to see that what Mindoo, as he was affectionately known, represented in the area of sports, and his commitment to the two sporting disciplines he excelled in – namely football and cricket – would serve as inspiration to Saint Lucians of all generations.

Born August 9, 1929 and until his death on May 5, 2006, Francis “Mindoo” Phillip was arguably Saint Lucia’s greatest cricketer and sportsman who never lost the respect of those who really knew him and understood the important role he played as a Saint Lucian in proving to those coming after him that they too could be the best in the sporting discipline of their choice.

According to Dunstan DuBoulay, Chairman of the team tasked with building a monument worthy of Mindoo’s sporting feats, the chore was not a simply one, but in the minds of all the team members, the finish product had to be outstanding.

“Stanley French and I travelled to Barbados and looked at the monument for Sir Frank Worrell and we said we have to do something better,” Du Boulay said.

And something better they did (see accompanying photo). Something that could only be described as spectacular and befitting of “Mindoo” as the greatest sportsman of his generation and arguably the greatest ever produced by Saint Lucia.

“His towering personality dominated the local sporting arena for over 25 years. He represented Saint Lucia in cricket and football for 22 years from 1947 to 1969 and it is true to say that during those years he left an indelible mark on the local sporting scene. His batting prowess and savage display of entertaining cricket had never been seen before or since his retirement. When he was at the crease he was in charge and with complete authority dictated policy,” was Du Boulay’s remembrance of Mindoo.

He went on to say that “Mindoo was every bowler’s nightmare. He was equally rough and tough in the game of football. He retired from representative football and cricket in 1969 and assumed the roles of national cricket and football coach for (both) male and female players. He was umpire, referee, linesman, groundsman, national coach and selector.”

“Having received little or no acclamation during his lifetime other than the park (Mindoo Phillip Park in Marchand) being named after him, having not accorded the treatment he so richly deserved as he made his exit is why we members of the committee decided we had to do something to recognize Mindoo’s contribution and to preserve his legacy and memory for future generations,” Du Boulay concluded.

Another man with intimate knowledge of “Mindoo” and his awesome sporting abilities was Sir Julian Hunte who also described him as one of Saint Lucia’s greatest sportsmen.

“Today’s ceremony is of special significance for me both personally and as a former sports administrator. It marks the culmination of years of commitment and dedication to the erection of a monument to one of Saint Lucia’s greatest ever sportsmen, Francis “Mindoo” Phillip. A man who earned the adulation of sports fans spanning the fifties and sixties into the early seventies for his tremendous achievements as cricketer, coach and sports organizer,” were Hunte’s opening words at last Saturday’s tribute to “Mindoo”, held right next to his grave located in the park named after him.

Hunte said that “Mindoo, in his time, embodied the hopes and aspirations of all the young sports persons island-wide as one who came from the ranks to dominate the scene of the so defined upper classes.”

“And above all, his efforts were his massive contributions to the development of sports in Saint Lucia initially as groundsman, cricketer and national captain to national coach, footballer and organizer. We have shown that at least for once that ours is not a dead heroes society,” Hunte said, adding that his fondest wish is that those up and coming outstanding sports persons will continue to be accorded some recognition, maybe not as grand as what was bestowed on Mindoo but sufficient to inspire them to give of their very best for love of sport and country.

Prime Minister Allen Chastanet who was present at the dedication of the monument said that the shrine was more than a shrine for Mindoo but rather a memorial for all Saint Lucians.

“The most charismatic Saint Lucian sportsman of all time, the fact that this ceremony is taking place at this time during our Independence Anniversary Celebration gives the occasion even more value and relevance because we are honouring a real Saint Lucian the likes of whom we may never see again,” Chastanet said.

Others who spoke at the dedication ceremony were Sports Minister Edmund Estaphane, Opposition Leader and the area’s parliamentary representative Philip J Pierre, Whycliffe Cameron, Cricket West Indies President and Castries Mayor Peterson Francis. Giving the vote of thanks was Mrs. Helen Philip, Mindoo’s widow whom also cut the ribbon thereby announcing that the monument can now be viewed by all. The monument was blessed by Monsignor Patrick Anthony.