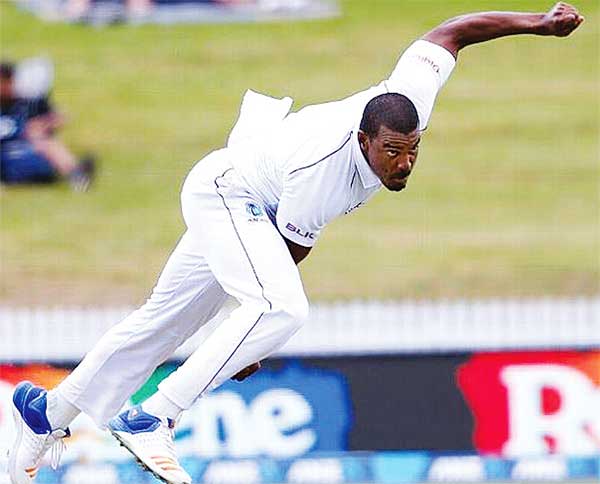 CAN England survive a whitewash in the Caribbean. All eyes will be glued on the pitch as hundreds of cricket fans are expected to converge at the Daren Sammy Cricket Ground as that venue will come alive hopefully for the next five days (Saturday 9th – Wednesday 13th) as host West Indies takes on England in the 3rd Test match which bowls off today from 10.00 a.m.

Most importantly the English reporters here to cover the match will be keeping a close watch as to how things will unfold at the DSCG. Thirty four years ago the West Indies last whitewashed England in a series of three matches or more.

The Windies lead the three-match series 2-0, following outstanding victories in the 1st Test at Kensington Oval in Barbados by 381 runs and by 10 wickets in the 2nd Test at Sir Vivian Richards Cricket Ground in Antigua.

This is the first time the two teams will meet in a Test match in Saint Lucia and by all reports the Windies team is expected to leave no stone unturned as they will be coming all out to win this historic Test match at the DSCG and with the vocal Saint Lucian crowd supporting, England will surely be in for a rough ride.

For the visitors, their backs are against the wall, and they too will be hoping to turn their fortunes around and to at least salvage some much needed pride in front of the Barmy Army.

With Jason Holder out because of a one match suspension due to a slow over rate in Antigua, the West Indies squad will be led by opening batsman Kraigg Brathwaite; the remainder of the squad reads – Darren Bravo, Shamarh Brooks, John Campbell, Roston Chase, Shane Dowrich, Shannon Gabriel, Shimron Hetmyer, Shai Hope, Alzarri Joseph, Keemo Paul, Kemar Roach, Oshane Thomas and Jomel Warrican.

Meanwhile, on Thursday 7th, West Indies fast bowler Shannon Gabriel, who has climbed to Number 11 on the ICC Test bowling rankings, spoke to members of the media as the Windies continued preparations for the third and final Test of the Wisden Trophy Series.

Gabriel returns to the DSCG where he picked up 13 wickets for 121 runs in June of 2018 against Sri Lanka, the third best match figures in West Indies history.

Gabriel said, “This series win is a great achievement for us. Thinking back about last year when we lost 2- 0 in Bangladesh, we were all hurting. Thankfully, we stuck together and we came out and showcased our talents. And to show some improvement. This series win has been great and I’m really pleased to be part of it. We have great confidence and we are definitely looking to make it 3-0. We’re not just going for the win, we’re also playing for the people of the Caribbean and we are also playing for points to move up the Test rankings,”

“This DSCG has been good to me I have had some good times on this ground where I bowled well and got wickets. It suits my style of fast bowling and I did well last year when we played against Sri Lanka. It’s a fast pitch with some bounce, so I’m expecting the same kind of pitch here again this year,” Gabriel added.