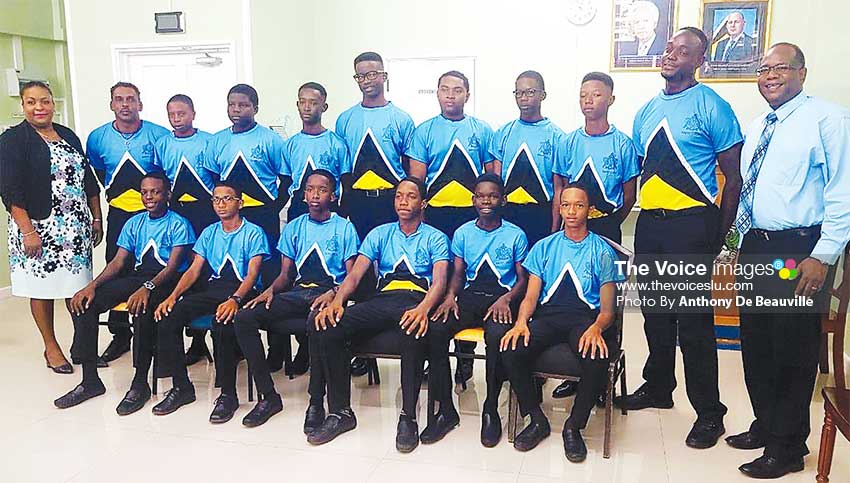 IT was standing room only at the Department of Youth Development and Sports office located on Micoud Street in Castries Wednesday morning, as Saint Lucia’s 13 member team was introduced to the local media and parents.

The Saint Lucia team is hoping to regain the Windward Islands Under-15 title, which they lost to Grenada by .03 points last year.

There is a record 10 new comers in the squad. With Saint Lucia losing their title to Grenada via bonus points being awarded to the fast bowlers, host Saint Lucia, for the first time; Saint Lucia have included seven fast bowlers, two of whom are left arm seamers.

The team is being captained by Tarryck Edwards with Royce Paul as his vice-captain and includes Daren Sammy Jr the only other player repeating this year’s tournament which bowls off on Monday 10th December. Sammy Jr is the son of former West Indies captain in all three formats of the game and two times ICC World T20 Champion, Daren Sammy.

Also in the squad is Shawnil Edward son of former national under-19 player, former Minister for Youth Development and Sports and Parliamentary Representative for Dennery North, Shawn Edward.

On the opening day, Round 1, host Saint Lucia plays defending champions Grenada at the Gros Islet playing field and Saint Vincent and the Grenadines takes on Dominica at the Mindoo Phillip Park.

Both matches will simultaneously bowl off from 9.30 a.m.

Umpires for the Saint Lucia versus Grenada match are – Cuthbert Mc Vane and Vernillius Gabriel with Joshua Charles as the stand by. The match between Saint Vincent and the Grenadines versus Dominica, Umpires are – Allian Ashby and Roylin Cooper, with Renal Alfred as the stand by.

The following day (Tuesday 11th), Saint Lucia plays Dominica at the Gros Islet playing field and Grenada versus Saint Vincent and the Grenadines at the Mindoo Phillip Park.

”One year has gone and the excitement never seems to stop around this time, when you look at their hard work, commitment and dedication of these boys Saturday after Saturday whatever venue they are there on time and there is no shortage of hard work.” Eugene said, referring to members of the team.

He said, “Last year Saint Lucia lost the tournament by .03 points awarded to the Grenadian fast bowlers”. A stroke maker in his earlier years against fast bowling, Eugene asked the fast bowlers to raise their hands for those present to see and the crowd in attendance went like Wow!! He said, “Trust me, whenever our fast bowlers have the ball in their hands they will deliver; it gives us options and it gives us a balance in our team”.

1st Vice President of the Saint Lucia National Cricket Association Shawn Alcindor congratulated members of the team on their selection and expressed confidence that they will represent the country well during the tournament.

He also said that cricket has been on the resurgence in Saint Lucia over the last few years.

“We need to continue to develop our young players because cricket is a high paid profession. I want you to take this seriously, there is a lot of money to be made, at this level there is not much to be gained, but if you remain focus and develop, you will get to the pinnacle of cricket in the region and that’s playing for the West Indies”. Alcindor said.

Also addressing the young cricketers and parents who attended the briefing was Deputy Permanent Secretary in the Department of Youth Development and Sports, LiotaCharlemange- Mason; who went on to echo the sentiments shared by the Master of Ceremony Ryan O’Brien regarding the amount of parents and guardians present. She said, “This speaks volume for me, it shows that you are very interested in your boys and very often our boys are left behind”.

“The 13 man squad for the next 10 days will be representing us at the Winlot Under -15 cricket tournament; it is a tournament in which Saint Lucia has always performed very well. In the last five years we have won four times. In 2017 we came second by .03 points, (sometimes I want to say they deliberately took it away from us), we did not lose. It had to do with a fast bowling system which I will not try to make you understand myself; I would hope our coaches have prepared our fast bowlers to go all out and this does not work against us”. Charlemagne – Mason said.

1st National Bank representative, Robert Fevrier said, “There is a saying you may have heard “if much is given, much is expected”, i can actually feel the love between the Department of Youth and Sports, the parents, coaches and the management team, I can hear that through the words echoed coming from the parents in terms of sponsoring the team uniform.

“In terms of sponsoring the team uniform, it was not a difficult decision to make. Its boys. A lot of the time the boys get a bad rap. It’s good to see you are doing something meaningful. The thing about sports is that it really fosters us with that team spirt, team work and comradery which you will need in your personal and family life. When you get to become an adult in the work place that is key, that is very important, the discipline that you get, the health benefit that come with it and the ability to focus, so while you are having fun, it’s exciting and you doing something that you love and passionate about, you are getting other benefits out of it”.