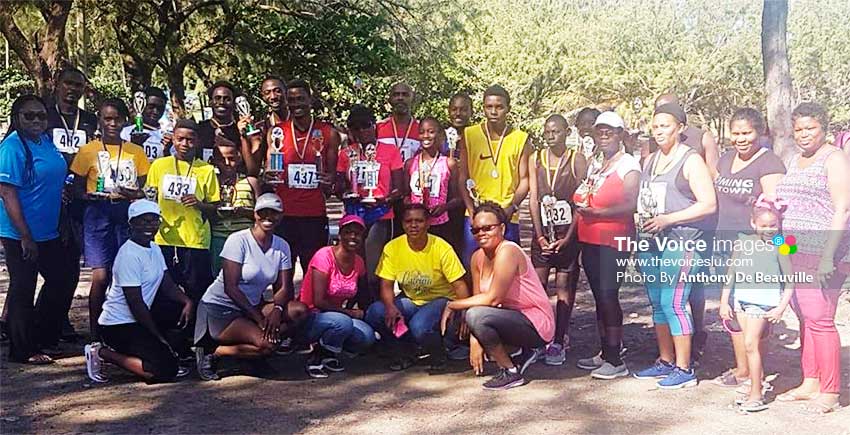 WITHOUT a doubt, it was a cause worth running for when the 5th annual La Feuille Pentecostal Church “Run for Jesus” road race took place this past weekend.

The four-kilometer event started at about 7:30 a.m. outside the La Feuille Pentecostal Church to end near historic and picturesque Pigeon Island.

It was a strategic win for 22-year-old Thaddeus George as he was first across the finish line in the men’s open category in a time of 32 minutes 17.46 seconds. He overcame rivals, Deanson Alphone (17 years) who finish second in a time 34 minutes 08.06 seconds and Addien Alphone (12 years) in a time of 34 minutes 35.80 seconds for third place.

According to the organizers, the Run for Jesus were supposed to take place in October, to coincide with Family week, but due to the passage of Tropical Strom Kurt, the organizers decided to push it to December.

Judith Maureen one of the organizers of the La Feuille Pentecostal Church said: “I am pleased with the outcome of the event. It’s the fifth and one would hope it will continue to be an annual event on the church calendar. The support received was very encouraging, the Saint Lucia Football Association (President Lyndon Cooper) for his continued support for the event, Larry Scott for donating the trophies for the overall male and female, Windward and Leeward Brewery (Sylvester Henry) for the non-alcoholic beverages for the participants), Blue waters, Kervin Mitchel (Saint Lucia Red Cross) and volunteers must be congratulated for a job well done.”