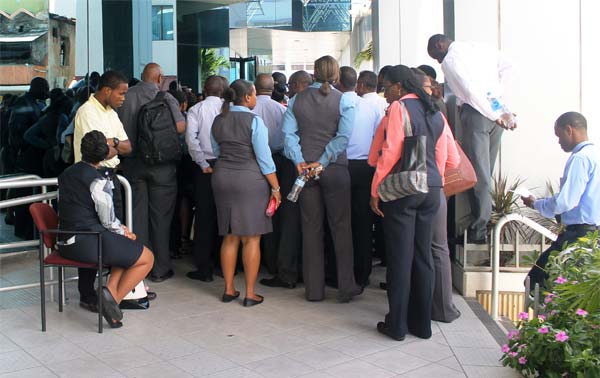 FAR from accepting them as partners in an alliance for a common cause, there are many in the business community who perceive trade unions as “troublemakers” or as organizations that “hurt business.” Bad news, altogether.

This misconception is often described by my longtime friend as the residual effect of management practices that are rooted in the plantation economy. He is of the opinion that many of our managers are yet to make the quantum leap to contemporary management practices.

Trade unions are not the enemies of business. Modern thinking and praxis suggest the opposite. However, trade unions were born out of social conflict induced by low wages and poor working conditions. Prior to the legalization of trade unions, the nature of the conflict was characterized by the spontaneous revolts of the working poor.

Whether in Europe, North America or the Caribbean, the spontaneity of the working poor resulted not only in the destruction of the employers’ property but the loss of lives as well. In many cases, their anger was directed at factors which were responsible for the creation of employment and wealth. Employers responded by using the state and, in some instances, private armies to administer repression.

This situation was counterproductive and, like slavery, proved to be a hindrance to the advancement of the society’s productive capacity. No modern society could function without appropriate mechanisms for resolving conflicts between labour and capital—the two most important features of the production process.

Consequently, trade unions moved from being unlawful organizations (Hornby v Close 1867) to legally constituted entities, recognized for the principle purpose of providing workers with the means to adequately address their grievances. Thus removing power at the workplace from an influential minority—susceptible to flaw—and placing the emphasis on consensus.

Rather than having to deal with the spontaneity of discontent and the destruction therefrom, employers and employees are now resolving their disputes through dialogue and not brute force. Trade unions, employers and the government are all equal social partners in the industrial relations process. Therefore, trade unions—though born out of social conflict—became what C. Wright Mills described in his book, The New Men of Power (Harcourt Brace p.9), as “managers of discontent.”

Anyone familiar with the term “industrial relations” as distinct from the “relations between masters and servants” should have a better understanding of the importance of trade unions in our current global economic context. In today’s economic environment, the conflict is no longer between employer and trade union, or what the anarcho-syndicalists referred to as the “highest manifestation of the class struggle,” but a struggle between rich and poor nations. This struggle is about the survival of the small and poor of the world.

“…being concerned with the ways in which working groups, both formal and informal, behave and interact. More specifically, it describes the efforts aimed at securing co-operation between management and trade unions at the workplace so that the most efficient methods of production can be achieved.”

This definition highlights the three important components of the relationship between employer and employee: the manner in which they interact (the basis of the interaction must be cooperation) and the expected outcome of the interaction (the achievement of efficient methods of production). Implied, but not stated, is the need for appropriate and agreed upon means of conflict resolution. Conflict in the workplace is a fetter to efficient methods of production. This definition is captured in the scope and intent of most (if not all) collective agreements. Traditionally, the intention of the parties is stated in the preamble or the first Article of the collective agreement.

The spirit and purpose of this Agreement is to maintain and further the good relationship between the Company and its employees represented by the Union, and provide a procedure for the avoidance and settlement of disputes.

This agreement is intended to promote economical and efficient operation of the Company, avoid industrial disturbances, and to achieve the highest level of employee performance consistent with safety, good health and sustained work effort. To those ends the agreement provides the rates of pay, hours of work and conditions of employment”

There are two factors (and others) which must be present if the parties are to give effect to this logic. The first is recognition by the employer and employee of the importance of work as an integral component of human existence. Both sides must recognize that there must be social collaboration for the production of any good or service.

The second, which is of greater significance, is trust. If there is mistrust among the parties in the industrial relations relationship, suspicion and confrontation will supersede and compromise the efficient operation of the company.
In his widely read book, Trust—The Social Virtues and the Creation of Prosperity, Francis Fukuyama wrote (p31):

“A high-trust society can organize its workforce on a more flexible and group-oriented basis, with responsibility delegated to lower levels of the organization. Low-trust societies, by contrast, must fence in and isolate their workers with a series of bureaucratic rules. Workers usually find their workplaces more satisfying if they are treated like adults who can be trusted to contribute to their community rather than like small cogs in a large industrial machine designed by someone else.”

The other important player in the industrial relations process is the state. The state is both a regulator and an employer. As regulator, the state is required to create the legislative framework which (a) provides support for the industrial relations system, thus creating institutions and procedures and allowing them to operate, (b) gives rights to the individual workers within the employment relationship, (c) is aimed at integrating workers and employers and their organizations more closely into the commercial, social and political operations of their organizations, and (d) lays down what is not allowed when conducting collective bargaining or any associated trade dispute.

The Labour Code which was approved by parliament last December was an attempt by the previous government to codify existing labour laws and to make amendments where required to ensure compliance with existing local and international standards.

However, the circumstances under which the Code was taken to parliament left a lot to be desired. The latter stages of the consultative process generated suspicion and mistrust among all concerned. As a result, the manifestos of both political parties (SLP; p43 and UWP; p19) stated that when elected further consultations will be held before the Code is given effect.

While the legislative framework is important for regulating the industrial relations process, the state must be more involved in encouraging social dialogue which is critical to the development of trust among the social partners. We should not wait for a crisis to start this dialogue. By then, it will be too late.

Let us learn from the Barbados experience where social dialogue enabled the island to recover from the economic crisis of the early 1990s.

(EDITOR’S NOTE: This article was previously published and is being reproduced in this issue in light of its relevance to some current happenings on the labour front.)