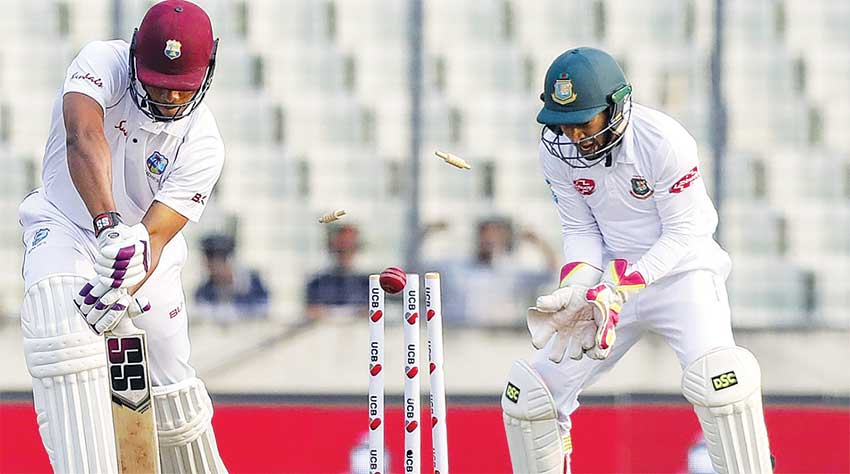 WITH just under two weeks before 2018 comes to an end, there hasn’t been any smile on the faces or joy in the hearts of West Indies Cricket fans both at home and abroad — and by the look of things, one wonders how long this painful feeling will continue.

Question: How much can West Indies fans endure?

In my Sportlight of Thursday 6th December 2018, I openly asked the question, Can the current West Indies men’s team survive a 10-ball over in Test Cricket? For some people it was like, Huh!! Really, what am i talking about? A 10-ball over?

Just a few days after my article, Cricket West Indies President – Dave Cameron, lamented the poor performance of West Indies players. He argued that the team current struggles are due to the players’ lack of commitment to the West Indies. Has anyone agreed or disagree with him?

Like Cameron and many Caribbean fans I know the glory days of our once upon time committed players that played the game in the Clive Lloyd era. That yesteryear commitment can never return to West Indies cricket. That’s a done deal.

Seriously speaking, the West Indies was once a team to be reckoned with in world cricket; those who played in the 1975-1976 series against the Australians got whipped 5-1, it was lesson to be learnt and they learnt the hard way. The end result was, boys became men and the rest is history. West Indies ruled world cricket for 15 unbroken years. Our players went out there as men representing the Caribbean people; they played for the fans and had a love for the game.

Cricket was called a gentleman’s game, am not sure what to call it now. I have heard commentators say, “The West Indies cricketers got blown away”, “School boys get whipped”, that’s the state we reach now. People making a mockery of us.

I support Cameron’s views when he spoke about poor performance; this has been happening for a while now and the various Chief of selectors before Courtney Brown era continue to select certain players even when they are going through bad patches in other words underperforming, (the insularity).

Talking about insularity in our cricket, it’s alive and well and needs to be thrown out of the window, it is supposed to be a level playing field and give those that deserve to be selected their just due. Twenty years later the insularity is still there, the fighting amongst the territorial boards is alive and well so the problems that exist now extend beyond the field of play for years.

You are right Cameron when you mention everybody wants the game to be over in three hours, and in addition everyone wants to get rich quickly.

Have a bird’s eye view of the last Test series versus Banagladesh, nobody want to dig in deep, so my 10- ball over is King for West Indies from now on unless we change our approach towards that glorious game.

The CWI Chief also said that at an upcoming board meeting, serious decisions around Windies cricket policy would have to be made.

I wonder what that would be. Watching from the outside, CWI need to put their foot down and remind the players West Indies cricket is priority.

I guess some heads will roll, especially those from the Territorial Boards; they keep tolerating nonsense from the so-call stars and the so call stars keep failing us when on international duties.

The CWI Boss also made the point that another part of the problem is, there are players going in and out of the system and they are not fit enough.

So the questions are, why are they selected? The chief of selector is he not aware that they are not fit to play? So who takes the blame for selecting an injured player? Certainly not me. The best thing to do is to get rid of the chief of selectors and those responsible for the HPC/various Camps.

I am not sure of the millions of dollars spent and during what period, but the CWI President made the point that millions are spent to bring players to where they are at. For the last five years CWI in all three versions of the game has not moved from point Z to W far less from point B to A. We were fortunate to win three World Cups in one calendar year (2016) namely the ICC Men, Under- 19 and Women World Cup.

In February 2018 we lost the Under-19, while there was a glimpse of hope by the women who went out to defend their championship. I must admit they truly represented the Caribbean people. Ladies you can take a bow, you have the support of the Caribbean people and I simply hope your men counterparts can one day, whenever that will be, but rest assured it’s not anytime soon will they emulate performance and grit that you showed both on and off the square.

The CWI President went on to say, CWI need players to commit to West Indies cricket. Will that ever happen, the answer is absolutely No. We have created an atmosphere and the monsters in the region. The in-thing is, I am a big player, scoring runs, top fielder, taking wickets; it’s my time to make the Big Bucks, playing for West Indies is secondary.

With that said, CWI needs to select players for the various formats of the game, some of our key cricketers play Test, ODI and T20, I mean the human body can take that much, so by the time they are called to represent the West Indies after playing or plying their trade all over the world their bodies and their mental aspect are all burned/ worn out so how can they perform or give of their best representing the Caribbean.

It is an outcry across the region because the West Indies is not one country. If this were South Africa, Cameron said, “We would not allow our players to play other events when West Indies is playing cricket.” Well this is not South Africa. You think South Africa, Australia and England cricket boards are any different, Yes they are, they have policies/guidelines/ rules in place so the players can adhere to. Tell me what do CWI have. CWI you’re the employer, the players are the employees. So who is the Boss around here?

But the question is, should the West Indies fans hold players accountable for their lack of commitment? There is no two way street here, the answer is absolutely Yes! The fans need the commitment and consistency from the players.

In fact Cameron is saying that there seems to be no moral authority to force people to play for the Windies, even though CWI have allocated a lot of resources to the training and development of its players. I quite agree with you Mr. President, but you really can’t make the minds of people. A number of times players are selected and at the very last minute you hear a particular player saying; I am out because of personal reasons, then hours after you hear that same player either just scored a whirlwind century or picked up five wickets somewhere around the world.

By the look of things we have lost all the battles; there is an old adage which goes this way. What’s lost can never be regained. Well that is our position right now. So the questions are. Who created this embarrassing position we are in right now? Who allowed the players to do as they pleased? How can we get out of it? As a people, we must never forget, Cricket is the only sport that brings the entire Caribbean region together, something no politician can do, the time is now to rescue West Indies cricket and Caribbean pride, even if we have to say thank you to some players, selectors, the administrative arm of CWI, those at the helm and move on, the future of West Indies cricket stares us in the face and unless these happen we not going anywhere.